I used to fly helicopters off shore for a company that was contracted by oil companies and vendors that tended to oil rigs and oil platforms in the Gulf of Mexico, mostly off the coast of Louisiana. 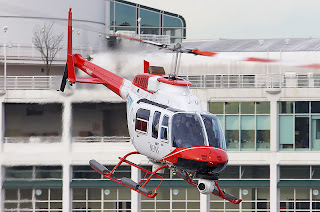 I could end up flying 100 miles or more off shore in my single-engine Bell Jet Ranger. The Jet Ranger is a gas turbine-powered helicopter. In common parlance, a gas turbine is what most people refer to as a "jet," thus the name "Jet Ranger."

The Jet Ranger I flew had room for me and a passenger beside me in the front, along with usually three (but as many as five) passengers in the back seat. It was severely weight-limited, which means that I could load the aircraft with people and not necessarily have enough power to take off with them because of their weight. When you're operating around the oil fields, you have to consider that along with the weight of the passengers, you have to think about the weight of their equipment too.

So far, so good, right? It sounds straightforward enough - if you can't take off with what you have, you take some weight out of the helicopter so you can take off. This is more easily said than done though. 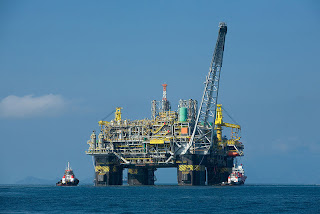 When operating on oil rigs and platforms in the Gulf, however, you do not have the opportunity to generate airspeed near the ground and you always end up requiring that extra power since the platforms and rigs are elevated well above the water. The long and short of it is that just because you can hover over an oil platform with all of these people and their equipment aboard doesn't mean you can actually fly with them.

That is where it starts to get difficult. You pick up into a hover with guys who have been on that platform for two, three, maybe four weeks and they're anxious to get home. When it's late in the afternoon 150 miles off shore, they realize that if you can't carry them and their things, they'll be stuck on the platform (and away from their homes) for another day. It will also cost their company a good chunk of change to hire the helicopter for a return trip the next day to pick them up. There is an implicit pressure to get the job done, even to push "the envelope" a bit.

So, you pick up into a hover and everyone on board is relieved to see that the bird got off the deck. You check the instruments and the power that you're using in the hover carefully to be certain you'll have enough power available to fly off safely. You and your passengers are on the same side now - you are all pulling for you to complete your takeoff for the trip back to the shore. If you determine that you can't take off with the weight you have on board and you decide to land the helicopter to boot someone off the aircraft, your passengers will be disappointed and they will often even doubt your flying abilities and nerve.

You know, though, that if you get this wrong, you and your passengers will gently ascend up and away from the platform until your rotors are clear of the edge of the platform and are no longer driving air flow over the surface only a few feet below - the surface is now suddenly 100' below and the helicopter struggles to produce enough lift to ascend further. Rather than ascend, the aircraft begins to settle. You try to pour more power into the engine and rotor system, but it's not there. Now, you settle more rapidly and within seconds, your aircraft is in the water.

Hopefully, the aircraft lands upright and no one is injured so you can put them into the water with their life preservers. More likely, though, in your struggle to keep the aircraft in the air, the helicopter experiences a little bit of a roll or a yaw, or a little nose down attitude from your attempt to gain airspeed and the rotor blades strike the water and hack away at the water until the blades themselves are torn away by the terrible violent impact. The aircraft then quickly rolls over, probably upside down. Hopefully, the passengers are able to get out unharmed.

The pressure to complete the takeoff is tremendous. Again, as you lift into your hover, everyone is your friend. If you land on the deck to leave someone behind, you are no longer the most popular guy on the aircraft. As you begin your ascent, your friends are still with you. As you settle toward the sea, you're losing friends rapidly. Once the sea water begins pouring into the aircraft, you don't even like yourself.

It has occurred to me on a number of occasions that there are a lot of decisions a person has to make that put him in similar straits. We're often caught in the horns of a dilemma with bad options all around. The only answer in these instances is to do the right thing, even if it's the unpopular thing. The unpopular choice almost always leaves you unpopular. The right choice oftens leaves you unpopular as well, but it also leaves you right.