I was relatively new to off shore flying when I picked up an assignment to spend the day supporting an oil company in a field of oil platforms off of Louisiana. 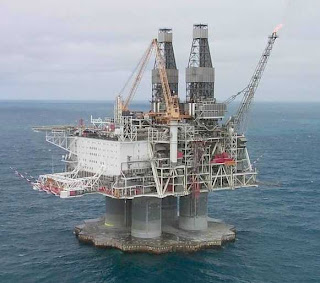 As I landed on my first platform, my passenger said he would be only a few minutes so I decided to delay a needed refueling until I could take him to his next stop. If I took off to get fuel on another platform right then, I would need to shut the helicopter down to refuel and wouldn't be able to return for a half hour or so. I didn't want to keep him waiting if it wasn't necessary.

It turned out that this guy had me waiting up on the deck at idle for about half an hour, so I was really needing fuel by the time he came back to the aircraft.


I dropped him off at the next stop and went looking for a refueling platform. All of those gas and oil resources out there and relatively few places to get some fuel. Ironic. Anyway, I found a fuel platform (identified by number) on my map and was looking for a platform with that number on it. Sometimes, the number was painted on the deck of the platform and sometimes, the number was painted on a sign near sea level so boats could identify them. Most of the time, they were identified both ways.

I found the platform that I thought should have been the one I was looking for, but it was COVERED SOLIDLY in bird droppings - droppings is an understatement - this thing was covered in a solid sheet of white.