A Turn of a Phrase 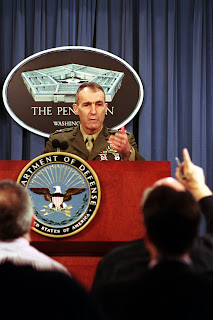 I was in the commissary (grocery store) at NAS Pensacola this afternoon when I ran into my former air group commander, Fred McCorkle. He's a highly-decorated and combat-wounded veteran of the Vietnam War and the former CO of Marine Air Group 29 at New River Air Station, North Carolina when I was a helicopter pilot in one of the squadrons in the group. He's retired now and is in town for a few days of vacation.
He ultimately became a lieutenant general (three-star general) and the Deputy Commandant of the Marine Corps for Aviation, the senior aviator in the Marine Corps. He was very close to my former squadron commander, R. J. Wallace, as I was. They were both great leaders and great Marines. Naturally, our conversation turned to Colonel Wallace.
Back in the car on the way home, I thought back to my time in Colonel Wallace's squadron, HMM-263.
I had known him since I was a lieutenant and he was a major. We were in different squadrons, but since we both worked in the aircraft maintenance department in our respective squadrons, we worked with each other frequently.

By the time he became CO of HMM-263 as a lieutenant colonel, I was a captain just returning to the United States from my second six-month deployment to the Mediterranean. I was about to be transferred to Pensacola to be a flight instructor when he told me I needed to delay my transfer to Pensacola and go with his squadron for a short deployment to Norway. When he said I "needed" to go with his squadron, he wasn't telling me to do it, he was telling me he needed me to do it. I spoke that language, so I understood.

The pilots in his squadron were fairly inexperienced, especially in shipboard operations, and the North Atlantic is a tough place to cut your teeth on ship landings, day or night, so he thought I could help. I had other plans, but he was a hard guy to leave hanging. Going to Norway with his squadron was going to be the right thing to do so I told him I'd go. Besides, he promised that it would be a short 58-day deployment because the Navy needed to get the ship back to port for some work. It was the same helicopter carrier I had just been to the Mediterranean on, the USS Guam. 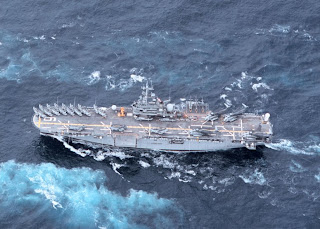 So, I became a member of HMM-263. The Guam cruised down the coast of North Carolina one weekend so we could practice landing on it. Colonel Wallace and I took a couple of groups of new pilots out to the ship on Saturday, August 4, 1990 to get them some training. We had just been issued our cold weather flight gear from large boxes in the squadron hangar a day or two earlier. I remember the date because it was only a couple of days after Saddam Hussein invaded Kuwait on the 2nd.
We were about half way through our work, however, when we were recalled to the base. When we arrived, we learned we needed to assess our readiness to deploy to the Middle East immediately. Two of the six squadrons on the base would deploy as soon as they could be ready. However, a recent dynamic component bulletin - a recall, in effect - grounded Marine and Navy helicopters like the one I flew all over the world. There had been a bad lot of transmissions that required all squadrons to check serial numbers and replace defective transmissions.
Unfortunately, there were quite a few bad transmissions in the Navy and Marine Corps fleet. It turned out we had one of those bad transmissions. Unless we could get it replaced, we would not be able to deploy to the Middle East. 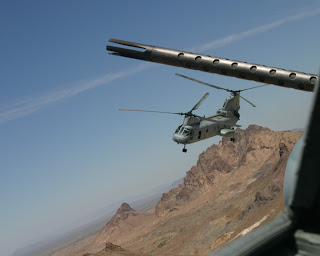 On Monday, Colonel Wallace, Major Bill Davin (my boss), and I were talking about our aircraft readiness and the fact that there was only one good transmission for issue on the entire East Coast, and it was at the aircraft rework facility in Cherry Point, about a 45 minute flight away.
Colonel Wallace asked me to fly a helicopter over to Cherry Point and tell them I needed to see the CO of the facility. He was a colonel and an acquaintance of Colonel Wallace's. I was to tell the colonel that we needed the transmission so we could deploy to the Middle East.
I flew to Cherry Point, walked into the offices, and asked to see the CO. It wasn't often a captain walked in unannounced demanding to see the colonel so my visit was a point of interest to the colonel's gatekeepers who didn't know whether to keep me out and take a chance that I was there on important business or to let me in and see what the big deal was. They let me in, but the second in command, the executive officer (XO), came along.
Once I was in the office, I told the colonel I was with HMM-263 and we needed that transmission because we were going to war. I suppose that was one way to put it. It would have been more accurate to say that we were headed to the Middle East if we got that transmission, but that would have made us no different than four or five other squadrons back at New River.
He repeated my statement back to me (I'm paraphrasing here), "You're going to war so you need the one good transmission on the whole East Coast." I cleaned up my statement a little and said, "Yes, sir. I need that transmission so we can go to war." He took a long look at me and asked me if Colonel Wallace was my CO, and I answered that he was. He said, "You know he's a crook, don't you," and I told him I sure did; he meant that as high praise as any Marine would have taken it under the circumstances. He turned to his XO and instructed him to give me the transmission.
A group of Marines loaded the transmission onto my helicopter and I flew it back to New River. It was installed and I checked it out on a test flight before the sun went down. The next morning's aircraft readiness report showed that we had a full squadron of ready aircraft, and a week and a half later, we were on the USS Guam headed for the Persian Gulf. Needless to say, our 58-day deployment became quite a lot longer than originally planned.

A lot of people don't understand that military people don't want war. Probably more than anyone other than their families, they tend to despise war. But, they also tend to want to be in the middle of it if there must be one. Our squadron was just like the others. They all wanted to go, but we were a little quicker on the draw.

This was one of many times where I saw that while you want to answer when opportunity knocks, sometimes you have to take the door to opportunity so it can knock.

We rushed to the Persian Gulf and seem to have helped discourage Saddam from attacking into Saudi Arabia. Ultimately, the full American and allied force made in on scene. By the time January and the start of the war rolled around, that squadron of once-inexperienced pilots was plenty ready.
Posted by Rob Doss at 11:28 PM
Email ThisBlogThis!Share to TwitterShare to FacebookShare to Pinterest