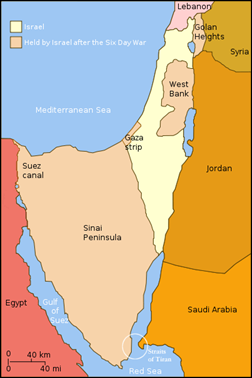 The President has joined the chorus of voices calling on Israel to cede the territory it seized during the Six Day War in 1967. From the Israeli perspective, the events leading to and after that war have proven decisively that those pre-1967 boundaries were not part of an equation for peace.

The President’s new policy is a dramatic departure from American policy that’s been in place since the war.

In the past, American leaders have considered the epic abuse the Jews endured at the hands of the Nazis before and during World War II, and have been comparatively less sympathetic to the territorial claims of the Palestinians whose loyalties were aligned with the Nazis.

In the past, American leaders have recognized that Israel has been the traditional homeland of the Jews since the time of Moses.

In the past, American leaders have recalled that the Allied victory in World War II against the Axis powers led the United States to facilitate and support the United Nations charter that established Israel.

And in the past, American leaders have remembered the significance of 1967 and 1973, and the decades of skirmishes, ambushes, rocket and mortar attacks, and car bombs in the history of Israel and Israeli national security.

After World War II, the small stretch of land we know today as Israel became a logical and legitimate spoil of war for the Allies to do with as they saw fit. They chose to press for the repatriation of the Jews to their traditional homeland in the eastern Mediterranean.

It seems today that Americans have a poor and politically expedient memory. Anyone wanting to understand why our allies find us an inconsistent partner need not look much farther than the President’s statement on Israel over the past couple of years, punctuated by his call for Israel to return to its pre-1967 borders.

Will the Israelis agree to his demand? Of course not. History shows that would be disastrous for Israel’s sovereignty. But let’s focus on 1967 since that’s the year the President has decided was the pivotal year in the discord in the region.

The year 1967 found Israel nearly 20 years old when Egyptian President Nasser said in a radio broadcast, “The existence of Israel has continued too long. We welcome the Israeli aggression. We welcome the battle we have long awaited. The peak hour has come. The battle has come in which we shall destroy Israel.”

On May 30, Jordan signed a defense agreement with Egypt in preparation for war. Iraq moved troops and armor into Jordan the following day. Six days later, Iraq joined the growing military alliance.

Take a moment to look at the map above. Every nation that bordered Israel except for Lebanon had taken up offensive military positions around Israel by the end of May, 1967. That left only the Mediterranean Sea at Israel’s back.

Then, the international waterways that provided trade and travel access to Israel were closed in the face of Israel’s announcement that doing so would be considered an act of war. When Egypt would not stand down, Israel attacked. That was June 5.

Israel very quickly destroyed over 400 enemy aircraft and took the Sinai Peninsula and Gaza in the south. Jordan began firing artillery at Jerusalem in the heart of Israel right away. After warning Jordan’s King Hussein to cease fire and withdraw, Israel captured the West Bank and Jerusalem.

While that was happening, Syrian artillery based in the Golan Heights in the north, pounded civilian targets in northern Israel. So, after dealing with Egypt and Jordan, Israel turned its attention to the Golan Heights, capturing it too. Six days after the start of the war, Israel agreed to a cease fire on June 10.

True to form, a UN resolution called for negotiations and for an Israeli withdrawal from lands captured during the war.  On June 19, 1967, under American pressure, Israel offered to return the Sinai Peninsula and Golan Heights for a peace settlement. The plan did not include the Gaza Strip and it called for a demilitarization of Sinai. Egypt and Syria refused to negotiate with Israel, so Israel held onto all of it.

The chief reason governments and non-governmental entities in the region have refused to negotiate with Israel over the years is because they’ve not recognized Israel’s right to exist in the first place. The thinking is that if Israel doesn’t exist, any negotiation with them is pointless, even if it means not negotiating for the return of the spoils of war.

In October of 1973, Egypt and Syria launched a war against Israel: the Yom Kippur War. The Egyptians crossed the Suez Canal into the Sinai Peninsula while the Syrians came into the Golan Heights on Yom Kippur, the holiest day on the Jewish religious calendar. The Israelis were caught off guard and suffered heavy losses early in the fighting before rallying. By the time a cease fire was agreed to, Israel had retaken the Golan and crossed the Suez to cut off the Egyptian army. In the end, around 2,700 Israeli soldiers and 8,500 Arab soldiers had died in the fighting.

The freeze thawed a little in the 1970s as Egypt became the first to negotiate with Israel. Then, as part of a peace treaty between Israel and Egypt in 1979, Israel withdrew from the Sinai, and peace has endured between them since then. The President of Egypt at the time was Anwar Sadat. Sadat had led Egypt into the Yom Kippur War six years earlier, and now finally settled for peace. For signing the peace agreement with Israel, Sadat won the Nobel Peace Prize and was later assassinated.

As the Israelis see it, the equation is very simple. Its neighbors have used certain bordering areas from which to launch attacks several times over the past 60 years. Their experience instructs them that those pre-1967 borders did not prevent aggression against them between 1948 and 1967 and, in fact, made them more vulnerable to a quick conquest should they be late to the fight. Again, history has not shown those borders to be a part of the formula for peace between Israel and its neighbors. Israeli Prime Minister Benjamin Netanyahu knows that. 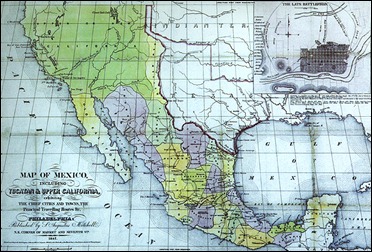 Unless we’re willing to hold ourselves and every other nation in the world to the same standard in the way conquered lands are disposed of, we need to step back from our insistence that Israel return to its 1967 borders.

Posted by Rob Doss at 2:38 PM
Email ThisBlogThis!Share to TwitterShare to FacebookShare to Pinterest