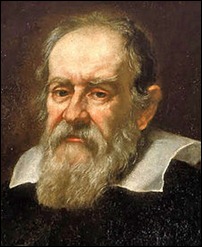 Only 400 years ago, Galileo turned the religious and scientific worlds on their ears when he publicly asserted the heliocentric theory – the theory that the Sun was at the center of the universe – as a scientific certainty.

Up to that point, the generally accepted view was that the Earth was at the center of the universe. The Church held that God would not have positioned His most important creation anywhere other than at the center of everything else He created.

The Church’s frame of reference was a group of Biblical passages that seemed to lend weight to geocentrism: Joshua 10:12 taught that Joshua commanded the Sun to stand still (thus the belief that the Sun moved). Then, there were Psalm 93:1, Psalm 96:10, and 1 Chronicles 16:30, “…the world is firmly established, it cannot be moved,” Psalm 104:5 “…the Lord set the Earth on its foundations, it can never be moved,” and Ecclesiastes 1:5 “…the Sun rises and the Sun sets, and hurries back to where it rises.”

Until Galileo came along, certainly before Copernicus, science wasn’t what it yearns to be today. Before them, hypotheses were considered legitimate if they were consistent with observations of reality – if they “saved the appearances” – rather than whether they actually equated to reality. Some would argue that environmental and climatic sciences have returned to the old “appearances” model, less interested in truth than in appearances.

The problem between Galileo and the Church wasn’t as it is often portrayed: that the Church interfered with science by taking on and ultimately excommunicating Galileo over his heliocentric theory. The fact is that Galileo started it. He took the Church on and insisted that it correct its Biblical teachings on the basis of his yet unproven theory that the Sun – not the Earth – was at the center of the universe. It wasn’t enough for him to establish new science or to redefine it. He wanted the Church to essentially admit the Bible was wrong; the Church would have nothing of it.

The fight that ensued stirred up a massive political hornet’s nest that thrust science into theology, a course of events that neither party could or would remove itself from once it gained steam.

Moving ahead to April of 1975, Newsweek magazine ran an article that, today, is absolutely fascinating. The article made a rather powerful emotional case for doing something urgently about the global cooling phenomenon. The concern was that if something wasn’t done, there would be famines, flooding, tornadoes, and more.

Then, 30 years later in 2007, a politician – former Vice President Al Gore – came along, establishing himself as an uncredentialed expert on global warming. The concern over global warming – just as it had been with global cooling 30 years earlier – was that if something wasn’t done, there would be famines, flooding, tornadoes, and more.

Today, the discussion has shifted again and we’re now talking about “global climate change.” I suppose the new position acknowledges that the climate is intermittently warming and cooling, but whatever it’s doing at a particular time, it’s wrong and humans are causing it.

Moving forward again, a Vatican scientific committee recently released a report parroting a widely discredited prediction on the likelihood that the Himalayan glaciers would disappear by 2035. What’s noteworthy about the Vatican’s release of this report isn’t only that it supports a widely discredited theory, it’s that just 3 years ago, the Pope himself decried and discouraged the doomsday-theorizing that has characterized the climate discussion over the past 30 years.

The Pope said in 2007, “It is important for assessments in this regard to be carried out prudently, in dialogue with experts and people of wisdom, uninhibited by ideological pressure to draw hasty conclusions, and above all with the aim of reaching agreement on a model of sustainable development capable of ensuring the well-being of all while respecting environmental balances.”

It’s time for the scientific community to clean up the science on this climate change issue and not allow it to remain tainted by politics and religion. I know that’s difficult since science relies so heavily on government patronage, but there needs to be integrity in their work. We can’t keep swinging from one extreme position to another, each with “undeniable” evidence that supports its conclusions until the next “factual” position hits the scene. A fact in science is supposed to mean something.

There is little role for religion in arguing science either. The pulpit should be reserved for bringing people closer to God. If handled well, religion can teach the multiplicity and vastness of God’s creative plan and power, and science can help provide vivid examples of that plan and power. As St. Ambrose wrote about the Galileo affair, “To discuss the nature and position of the earth does not help us in our hope of life to come.”

My greatest concern is that when the lines guarding the integrity of the scientific method are breached, we’re left without a faithful distinction between what constitutes social activism and dogma and what constitutes science and fact.

We are repeating the mistakes of the skirmish between Galileo and the Church. The lesson from that fiasco should have been that we cannot ask the whole of society to undergo radical cultural changes without the benefit of scientific proof to justify them, and rather than posturing, scientists should busy themselves with “proving.” Rhetoric and posturing helped delay by 150 years the good science that ultimately proved Galileo’s theory to be correct. We should not make that same mistake with our understanding of our climate.

Bad science on the climate change issue will leave us ill-prepared and ill-adapted for whatever future the climate does hold for us. The science is already in on one simple reality: if we fail to adapt to our changing environment, we will succumb to it. At this point, it could be fairly said that the human race cannot afford more politics and religion on the subject; instead, we need better and more complete science.

Posted by Rob Doss at 9:42 PM
Email ThisBlogThis!Share to TwitterShare to FacebookShare to Pinterest