Who Was Richard B. Russell, Namesake of the Russell Senate Office Building?

With the recent passing of Senator John McCain, there has been much discussion of renaming the Russell Senate Office Building after McCain. As the public becomes more familiar with the current namesake of the building, the question some might raise is why it has taken so long to re-name it for someone else. 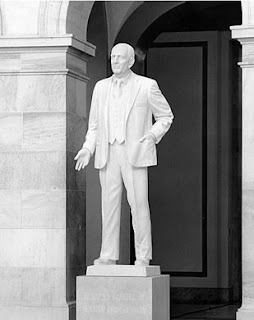 Senator Richard B. Russell was a democrat United States Senator from the state of Georgia and President Pro Tempore of the Senate when he died in office at the age of 73. He served in the Senate for more than half his life (38 years) and before that, he served as Governor of Georgia and as a member of the Georgia House of Representatives. He spent 50 of his 73 years in politics.

What makes the naming of the Russell Building after Senator Russell in 1972 noteworthy is his place in the history of United States civil rights and the timing of the naming of the building relative to what was generally viewed as the end of an ugly chapter in American history seven years earlier in 1965.

The 100 years leading to 1965 was plagued by rampant institutional racism and segregation, but Senator Russell stood squarely opposed to any change of course throughout his political career.

In 1956, Senator Russell co-authored the "Declaration of Constitutional Principles" (also known as the "Southern Manifesto") in opposition to racial integration in public places. The manifesto, signed by 101 mostly-southern congressmen (99 democrats and 2 republicans), was written in response to the Supreme Court's 1954 Brown v Board of Education decision which took much of the starch out of the Court's 1896 Plessy v Ferguson decision which legitimized the separate but equal segregationist doctrine.

A year later, Russell opposed the Civil Rights Act of 1957 which was advocated by President Eisenhower and created the six-member Commission on Civil Rights and established the Civil Rights Division in the U.S. Department of Justice. It also authorized the U.S. Attorney General to seek court injunctions against the deprivation and obstruction of voting rights by state officials.

Three years later, the Congress approved the Civil Rights Act of 1960 which expanded the enforcement powers of the Civil Rights Act of 1957 and introduced criminal penalties for obstructing the implementation of federal court orders. It also required voting and registration records for federal elections to be preserved. Senator Russell voted against this act as well.

The Civil Rights Act of 1964 prohibited discrimination in public accommodations, facilities, and schools, created the Equal Employment Opportunity Commission to monitor employment discrimination in public and private sectors, and provided additional capacities to enforce voting rights. Of the Civil Rights Act of 1964, Senator Russell said, "We will resist to the bitter end any measure or any movement which would have a tendency to bring about social equality and intermingling and amalgamation of the races in our states." The "we" to which Senator Russell was referring was a bloc of 18 Southern senators (17 democrats and 1 republican) who filibustered the bill in the Senate for 60 days in an attempt to block the legislation through Senate rules.

Nonetheless, the bill which had been envisioned by President Kennedy and was carried on in his honor by President Johnson, prevailed in the Senate and was subsequently signed into law by Johnson. In response, Russell led a southern boycott of the 1964 Democratic National Convention.

The passage of the Voting Rights Act of 1965 was the last of the series of civil rights laws that had been approved over a span of eight years between 1957 and 1965. These laws were essentially designed to finally close loopholes and enforce the 14th and 15th Constitutional Amendments which provided citizenship and voting rights for native-born and naturalized African-Americans a century before.

Senator Russell voted against all four of those key acts of Congress.

Russell was selected to serve as Chairman of the Senate Appropriations Committee and President pro temporare of the Senate in 1969, he died in 1971, and the Senate Office Building was named for him in 1972.

So, at a time when there is an indiscriminate rush to topple confederate statues and monuments whether they were associated with the South's Jim Crow past or not, here we have a federal government building that is named for a dedicated segregationist who did everything he could throughout his lengthy career in public office to defeat the civil rights laws that were intended to reverse 100 years of institutional racism, even after slavery had been abolished by the 13th Amendment.

Some have explained Russell's actions as simply a matter of him being a product of his environment and times. History is replete with examples where that is true of others, but in this case, there was a century of legal authority that Russell and others before him dedicated their lives to defying. If Russell were merely a man - a regular citizen - in that time and place, that would be one thing, albeit still racist. However, Russell spent his adult life as the leader of a movement and as a leader and mentor in the United States Senate; in that context, he had a duty to rise above his time and place and lead righteously.

The decision to name the Russell Senate Office Building after Senator McCain is a no-brainer.  It should have never been named for Russell in the first place.
Posted by Rob Doss at 4:03 PM
Email ThisBlogThis!Share to TwitterShare to FacebookShare to Pinterest