Let Merit Be the New Reality

I just finished watching the video of the February 21st Escambia County Commission's discussion of Commissioner Robert Bender's suggestion and subsequent successful motion to convene a committee to explore courses of action for naming the new Pensacola Bay Bridge. 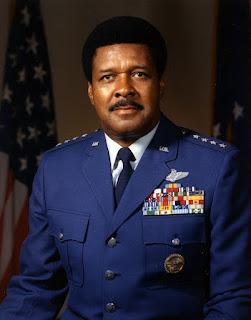 In spite of the Commission’s 3-2 vote to convene the committee, the issue has already been drawn out enough that several commissioners already know where they stand.  On one side, there are those who believe that the naming of the current bridge in memory of Senator Philip D. Beall, Sr. should pass on to the bridge that is being built in its place.  On the other side, there are those who believe that the new bridge should be named to honor the memory of Pensacola native General Chappie James.

After several citizens spoke on the matter, some of them veterans who supported naming the bridge in honor of General James, Commissioner Bergosh was the first to speak from the dais.

He went to great lengths to tell the audience that he is not anti-military.  In doing so, he talked about his family members who served or are serving in the military, but then he strayed off and essentially undermined his own assertion by insulting the veterans he said he supported.  He should have just said that he's a huge supporter of the military and veterans and let it go at that.

Then, Commissioner Bergosh went on to discuss the record of Senator Beall, Sr.  He said that he found it "disingenuous" and "disgusting" that those who had unveiled disturbing aspects of Senator Beall, Sr.'s record were dragging the Beall family's name through the mud "out of convenience or faux outrage of today's values juxtaposed against the historical realities of 200, 300, 400 years ago."

They refer in part to the fact that in 1935, Senator Beall authored a bill that ultimately became one of the now-infamous Jim Crow Laws that excluded African Americans from voting in Florida Democratic primaries.  That's not dragging his name through the mud; that's a fact of history and when he did it, the 15th Amendment of United States Constitution, ratified in 1870, forbade the denial of African Americans the right to vote.  The 15th Amendment declares, "the right of citizens of the United States to vote shall not be denied or abridged by the United States or by any state on account of race, color, or previous condition of servitude."

For context, state legislatures and courts throughout the South worked persistently for decades to circumvent the 15th Amendment.  The entrenchment of Southern society in the supremacy of whites and the fixation that Democrats had on preventing Republicans from diluting the political influence of Southern whites by permitting African Americans to vote was clear and pervasive.  When Senator Beall submitted his bill to exclude African Americans from voting in Democratic primaries, the Pensacola News Journal published an editorial that endorsed that effort:  "Pensacola is a city of white folks.  Negroes have their place.  A great majority of them are good citizens.  But, when we are selecting men who are to govern us, we do not want any balance of power to be in the hands of the colored people."

So, the question is whether we should hold Senator Beall's political actions in the 1930s against him in 2019.  In my view, he was part of the problem in the South where as a leader,  he permitted the racist attitudes that prevailed in the South before the Civil War to persist and undermine efforts to provide full rights of citizenship to African Americans after the Civil War.  It should be no real surprise that within the "rank-and-file" citizenry at the time, the Jim Crow Laws like the one that Senator Beall wrote would be well-received.  As we remember that Senator Beall didn't merely vote for a Jim Crow Law, he wrote one, we also must acknowledge that leaders of courage change flawed and immoral paradigms; they don't perpetuate them.  What Senator Beall did might have been good politics in Pensacola in 1935, but it wasn't courageous leadership.  We can't excuse that kind of leadership today simply on the basis that it was the going rate at the time.

With respect to memorializing figures in history, Commissioner May said, "Symbols do mean things.  There's no place to ever to think that monuments and things that happened don't affect our daily life today."

There is no prism of “today’s values” in the scrutiny of Senator Beall's record.  History has demonstrated that it was wrong for southern state legislatures to circumvent the Constitution in order to continue the institutional discrimination against African Americans.  Period.

Senator Beall, Sr. passed away in 1943, 8 years after he took office as a senator.  Commissioner Bergosh informed the public that Philip Beall, Jr. who succeeded his father in office after his death distinguished himself during World War II and had been held in a German POW camp after being shot down.

What Commissioner Bergosh didn't tell the audience was that Senator Beall, Jr., having served with distinction during the war which ended in 1945 and succeeded his father in the senate in 1947, was a member of the infamous “Pork Chop Gang” that worked vigorously to preserve segregation in the 1950s and 1960s in the midst of the Civil Rights Movement.

I can't help but contrast that record with General James' record.  He was the first African American four-star general in the armed forces, having flown combat missions and been decorated several times for valor in the Korean and Vietnam Wars as evidenced by his three Distinguished Flying Crosses and twenty-two Air Medals.  (So yes, he too was a combat veteran.)  As for his family, he, like Senator Beall had a son who followed in his footsteps.  One of General James' sons joined the Air Force and became a three-star general.

And General James was a great American:

"I'm a citizen of the United States of America and I'm no second-class citizen either and no man here is, unless he thinks like one and reasons like one and performs like one.  This is my country and I believe in her, and I will serve her, and I'll contribute to her welfare whenever and however I can. If she has any ills, I'll stand by her until in God's given time, through her wisdom and her consideration for the welfare of the entire nation, she will put them right."   - General Chappie James speaking to members of the Air Force Officers Association in the aftermath of the assassination of Rev. Martin Luther King

I believe the decision-making on the naming of the new bridge should be deliberate and deliberative, but it shouldn’t be unnecessarily drawn out.  I don’t see that engaging a committee to arrive at a conclusion that it appears most of the commissioners already have is necessary.  As Commissioner Underhill said at the meeting, "I don't need a committee to tell me what other courses of action there might be.  This (naming the new bridge in honor of General James) is the right course of action."

And there's a flaw in the premise that this issue must be discussed with all of the “communities,” identified at the Commission meeting as African-Americans and other minorities, and military members, etc.  As Commissioner May said at the meeting, "Chappie James wouldn't want a bridge named after him because he's an African American; he'd want a bridge named after him because he's a Great American."  So, to position the matter properly, the decision whether to name the bridge in honor of General James is not about simply honoring an African American or a military person, it’s about honoring a Great American who served his country with extraordinary distinction.

It's worth saying here that Commissioners May and Underhill clearly and eloquently stated positions in support of naming the new bridge in honor of General James.  Both staked out compelling positions that our symbols and memorials are meaningful in our daily lives and that "merit" should be the standard by this these things are determined.

To that end, Commissioner Underhill said, "I often hear in civilian life that rank has its privileges, but that's not how we do it in the meritocracy of the military.  Rank doesn't have its privileges; we call it a burden.  And it is a burden so immense that there really are no words that I can use to explain it."

It's my belief that the manner in which these two men, Senator Philip Beall, Sr. and General Chappie James handled the burden of leadership in their times is important to our community and that honor and merit should be the new "reality" by which they are recognized and revered.

I also believe that the public monuments and memorials that we erect today should represent the best among us:  our best people, our most-esteemed principles, and our fundamental core values.  That is how these structures can best and most positively affect the daily lives of people today.