Britannica Owes Us One

I mentioned in my first posting that my brother, Michael, recently learned that he had Chronic Myelogenous Leukemia (CML). Before this, I didn't know one kind of leukemia from another, but now I have some sense of at least one kind of it. I wish I never had a reason to know as much as I now do.

Michael told me about his cancer after a high school baseball game I was coaching ended. On reflection, that was probably the best time and place for him to tell me because it wasn't exactly the best time and place to spend a lot of time talking about it. I wasn't ready to discuss it much because I wasn't even really ready to HEAR about it. I made up for it the next day when we spoke again.

Michael and I grew up very close. We were a year and a half apart in age (I'm slightly older). I look a little older 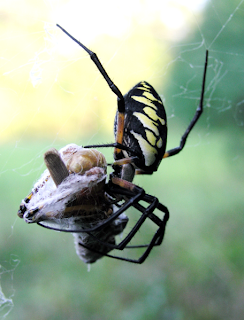 than he does, but I make up for it by being more immature than he is. Until high school, Michael and I did everything together. We roamed the woods looking for hideouts and new life forms. I remember one occasion when I was about 11 years old when we found this HUGE spider that neither of us had ever seen. Its abdomen had a pattern that looked like a yellow and black brain. In a stroke of profound genius, we named our discovery the "brain spider." We returned home and searched through our new Encyclopedia Britannica to confirm that ours was a new discovery. It turns out someone had already discovered the "orb weaver."

Encyclopedia Britannica was a source of much disappointment to us. On another occasion, it supported my father's ridiculous assertion that the "tadpoles" Michael and I had spent the day collecting were actually mosquito larvae.

On yet another occasion, my father referred us to our Encyclopedia Britannica to confirm that there was actually such a thing as a "snipe" before he left us at the far end of a corn field in the neighboring county in the middle of the night with a gunny sack (burlap bag) and a flashlight waiting for him and our godfather to drive snipe to us. There was another boy - a relative of our godfather - out there with us, and after a few hours, he decided to walk to our godfather's house to see what was going on. After seeing what there was to see, he walked all the way back out to the field to us and told us that they were back at the house playing cards. I didn't believe him; in fact, I told him, "My dad would never do that to us." I was wrong. We finally all headed back to the house where we found them playing cards as the other kid said they were. Britannica let us down again, this time colluding with my father and godfather in their terrible plot against us.

One day, though, while my parents were out of town for the weekend, leaving us in the care of my great grandmother who was visiting from California, there was a terrible accident at our house. It was August 31, 1969, so I had just turned 12 years old and Michael was 10. I remember the date because as I watched the news that night, the newscaster announced that boxing great Rocky Marciano died in a plane crash that night in Newton, Iowa. (We lived in Newton, Illinois.)

Michael, our sister, and a neighbor were in our garage, and as Michael went to hit the handle on the door to go outside, he plowed hand and arm first through the storm glass door. He fell through the door and as he did, a jagged piece of glass severed the artery in his right arm pit.

I was inside the house when my sister ran inside for help, excitedly saying that Michael had cut himself on the window. We ran outside and found Michael bleeding profusely and slipping into shock (although I didn't know what that was at the time). I had never seen or imagined anything like it in my life. He was obviously in a very bad way. As his heart was pumping blood out of his arm pit as fast as it could, he was trying to get up but couldn't quite do it. Finally, we got him to just lie down and he laid there in the grass groggy and wavering. That was unforgettable.

My great grandmother told me to run inside and get some towels. I suppose I was hoping his injury would be something we could just patch up and everything would be okay, so I returned with some small towels that clearly were not equal to the task. Seeing they weren't nearly enough, I ran back inside and grabbed every large bath towel in the house. The towels were really not doing anything to help him because he just kept bleeding until a neighbor ran over and pinched off his artery to stop the bleeding. The ambulance arrived and took Michael to the hospital about 20 miles away. I imagine he arrived at the hospital some 40-45 minutes after falling through the window; he was only a few minutes from losing his life. In fact, he was actually dead on arrival at the hospital. Had our neighbor not come to pinch Michael's artery when he did, we would have lost him for good right there in the yard.

My great grandmother traveled with Michael to the hospital and I stayed at home with my 9-year old sister and 5-year old brother. I threw the used towels into our outside trash and hosed down the blood-soaked lawn just outside our back door. I didn't know how much blood a person had in him, but I was intuitively aware enough of the situation, I guess, to know that the combination of Michael's delirium and all of the blood that was in the lawn meant he was in grave danger. As I tried in vain to wash the blood away, I was overcome with the realization that I might not see my brother alive again. That was tough.

In the meantime, State Police in Illinois and Indiana were trying to track my parents down as they were on their weekend getaway in neighboring Indiana. My parents arrived at home at around noon the following day. I met them at the car and I quickly realized the police had not found them and sent them home, so they were unaware of Michael's accident. Thus, the unenviable task of informing them fell onto my 12-year old shoulders. That was tough too. My mother nearly collapsed, but my father supported her, got her into the car, and they sped off to the hospital.

My brother nearly lost his life in that accident, and then he nearly lost his arm in the aftermath. He underwent a good number of major surgeries on his arm over several years to repair its workings so he could regain use of a limb that was in danger of atrophy. He and I roomed together when he wasn't in the hospital and I was part of the team whose responsiblity it was to remind him to "work his hand" to help him regain some mobility in it. (He LOVED being nagged about that.)

The truly amazing thing is that the following year, Michael was back to playing second base on our little league baseball team. He would field the ball with his gloved left hand, remove his glove, and throw the ball with his left hand. Ultimately, my father made him throw with his right hand, and he did.

He suffered quite a lot as a boy, but he never used his injury as an alibi for anything. He played baseball up through Pony League, then he played football (center and nose guard) in high school. Then he went off to Chiropractic College where he graduated with distinction and was his class president. He established a very successful practice, but had to finally retire from it because as the bones in his right arm became increasingly brittle, he was injuring himself every time he treated a patient.

I write all of that to get to this point...

My brother has had the dirty end of the stick more times than Dirty Harry did (if you haven't watched the Dirty Harry movies, you didn't get that). When it comes to "the challenge of a lifetime," he's had enough for several lifetimes. I've never known him to pity himself or to accept it from others, although as an empathetic person himself, he values expressions of empathy from others. He has always been the picture of courage in the face of agony and adversity.

So, I have no doubt he will meet his new challenge with grace and courage. It's my hope that he will bear up well under treatment and that the intervening years will reveal something that I know we won't find in the Encyclopedia Britannica today - a cure for his cancer. Maybe in the coming years, we'll find one in there. After letting us down so many times, Britannica owes us one.

Posted by Rob Doss at 5:01 PM
Email ThisBlogThis!Share to TwitterShare to FacebookShare to Pinterest

When my brother was diagnosed with leukemia a few weeks ago and decided to blog about his battle with the cancer, I saw what a great way it was to record thoughts and induce a little discussion. I do like to write and I do have one or two opinions about things, so it seems like the thing to do.

I have titled this blog "Blithering On."

Well, to be honest, I don't intend to waste either my time or anyone who decides to follow this blog's time with nonsense (if I can help it) and I'm not sure that I have an indecisive bone in my body. However, it is very likely that I'll post a thing or two after having been moved to a state of agitation. So, when it gets right down to it, the name "Blithering On" is a combination half-hearted disclaimer and a touch of false modesty. I hope that what I write proves the blog title to, in fact, be false modesty and not a confession.

Posted by Rob Doss at 1:01 PM
Email ThisBlogThis!Share to TwitterShare to FacebookShare to Pinterest