"I know the difference between right and wrong, and I can tell good from bad. But I also know that the more difficult decisions come when we have to choose between good and better. The toughest calls of all are those we have to make between bad and worse.”

In the summer of 1978, I met the man who, a decade later, would write those words. I was a sergeant and had just been transferred to K Company, 3rd Battalion, 8th Marine Regiment (K Co., 3/8), about to turn 21 years old. Since I was nearing the end of my enlistment, it didn't make sense to put me in charge of another squad only to leave again in a few months, so my new company commander asked me to manage the company training program.

That meant, in part, that I wrote our training schedules and firing range and ammunition requests and delivered them to the battalion headquarters about once or twice a week. About every other trip over there, the operations officer, a major and the man whose statement about making tough decisions begins this article, stopped me as I walked past his office and shot the breeze with me about a variety of things, sometimes, not surprisingly, about leadership and the state of the Marine Corps. We weren’t getting to be good buddies or anything; he was just being a good officer and mentor by picking my brain and sharing his thoughts with me.

One day, he asked me what my career plans were. I told him that I had applied for a commissioning program the year before but didn’t quite make the cut, so I was going to leave the Marine Corps when my enlistment was up. I told him that I had thought about reapplying, but that I had been told that my high school grades weren't good enough and that I shouldn't bother. Since I wasn't too impressed with those grades either, I understood.

He told me to forget that and to get to work on that application. My academic record was weak, but my record as a Marine was solid, so he believed that I had a decent chance of being selected for the program. He said that he'd be one of the three officers who would sit on my battalion screening board. The screening board interviewed me and came away recommending that I be selected for the program. Then, he called me to his office and gave me a lot of good advice, including a suggestion that I hand-carry my application to every colonel and general whose endorsements I needed and offer to be personally interviewed by them so they could confidently write a good recommendation for me.

A few months later, the Marine Corps published the list of Marines who were selected for the commissioning and education program, and my name was on it. Then, four years after that, I had a bachelors degree and a commission as a Marine second lieutenant.

Three years after I was commissioned, I saw a November 17, 1986 Newsweek article titled “The White House Swashbuckler-in-Chief,” that reported on a secretive member of the Reagan administration, Oliver North, who had roles in the release of hostages in the Middle East, the capture of the terrorists who killed an American on the cruise ship Achille Lauro, the invasion of Grenada, and negotiations with Iran during the Iran-Iraq War. Oliver North had been my operations officer from 3rd Battalion, 8th Marines in 1978, the man who encouraged me to become an officer. By 1986, he was a lieutenant colonel working as a member of President Reagan's National Security Council.

He went on to become very well known as a central figure in the Iran-Contra affair before he entered into politics and became a prolific author and a sought-after political and military analyst.

He came to Pensacola in 1991 on a signing tour for his book, "Under Fire," from which the passage that opened this article came. By then, I was a captain, having recently returned to the States and transferred to Pensacola after Operation Desert Storm. I stood in line to have him autograph my copy of the book.

When I finally reached the front of the line, I re-introduced myself to him, but after thirteen years, he didn’t remember me from Adam’s housecat. Still, he was quite gracious in trying to place me in his memory. After our brief conversation, he signed my copy of his book, “Rob–Semper fi–Oliver North,” then he shook my hand and wished me well before I went on my way.

Although my acquaintance with Oliver North didn't stand out in his memory, he was one of many Marines that I served with whose insights, advice, and leadership example were crucial to my development as a leader.

On a personal level, his advice and assistance were instrumental in encouraging me to apply for an education and a commission, and in getting me to follow through to see that my application received the consideration that it needed. I can't help but appreciate that all of the things that have happened in my life since then were made possible because of what he did for me.

On a larger and more professional level, his leadership example reinforced in me the importance of caring enough about your people to challenge them to be better, and sometimes, to challenge them to be better than they think they are. Some people have more potential than they realize. Sometimes it seems that hearing ourselves wonder if we have what it takes is a good reason to wade in and find out.

Posted by Rob Doss at 10:20 AM
Email ThisBlogThis!Share to TwitterShare to FacebookShare to Pinterest

A Convergence of Heroes 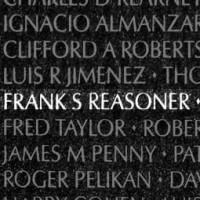 I wrote the other day about serving with Staff Sergeant B.C. Collins and the impact he had on my life and career in the Marine Corps, so I thought I'd write about two other Marines who put themselves on that same battlefield in Vietnam with B.C. Collins that day, one of whom was also a great influence on me.
First, a little background...
First Lieutenant Frank Reasoner was a former enlisted Marine, a "mustang." Reasoner was a sergeant when he attended the Naval Academy Preparatory School in 1957, but he couldn't get into the Naval Academy. Undeterred, he walked up to Capitol Hill to the office of Senator Henry Dvorshak of Idaho and told him that he needed an appointment to the U.S. Military Academy at West Point. The Senator must have been impressed with Sergeant Reasoner because he awarded him the academy appointment he wanted. Reasoner successfully completed his education at West Point and was commissioned as a Marine second lieutenant in 1962.
Reasoner was an infantryman when he was an enlisted man and he wanted to return to the infantry once he became an officer. As a first lieutenant, he commanded A Company, 3rd Reconnaissance Battalion in Vietnam.
Then on July 12, 1965, First Lieutenant Reasoner led a recon patrol deep in Viet Cong territory when the patrol was suddenly engaged by machineguns and other automatic weapons from an estimated 50 to 100 enemy soldiers. The patrol's point man, Corporal B.C. Collins immediately returned fire, killing three enemy soldiers before withdrawing to the advance party where Lieutenant Reasoner and three other Marines were.

With his commander dead, Corporal Collins took charge of the situation and silenced the enemy machinegun with an M79 grenade launcher while exposing himself to heavy fire. He bandaged one wounded Marine then laid down covering fire so the wounded Marine could crawl out of the range of enemy fire. Then, Collins carried the remaining wounded Marine to cover before personally carrying Lieutenant Reasoner's body 100 yards back to the main body, again exposing himself to enemy fire from the flanks.
As nightfall settled on the patrol, the call came in to Marine Medium Helicopter Squadron 365 (HMM-365) informing them that Lieutenant Reasoner's patrol had been ambushed, was surrounded, and needed an emergency medical evacuation and extraction.
Major Si Kittler, a 1953 graduate of the U.S. Naval Academy, was a Sikorsky UH-34D "Choctaw" helicopter pilot with HMM-365 and he answered the call. Major Kittler flew his UH-34 helicopter out to get the patrol. The official account recalled that "The landing zone, surrounded by Viet Cong, was under a crossfire from three automatic weapons, which made it virtually untenable. In spite of heavy enemy ground fire, unknown landing zone conditions and a lack of visibility due to darkness, (Major Kittler) ... landed and assisted in the evacuation of the patrol," saving eighteen lives in the process. In addition to the eighteen members of the patrol, he successfully evacuated Lieutenant Reasoner's body as well.
Thirteen years after his patrol was ambushed in Vietnam, Staff Sergeant B.C. Collins reported to G Company, 2nd Battalion, 8th Marine Regiment (2/8) at Camp Geiger, North Carolina to be my platoon sergeant. Then, four years after I served with Staff Sergeant Collins, I married Si Kittler's daughter, Christina, both of us unaware of the other's connection to Staff Sergeant Collins. Then, after I was commissioned in 1983, I was transferred to The Basic School in Quantico, Virginia where I attended classes in Reasoner Hall named in Lieutenant Reasoner's honor, and two years later–almost exactly 20 years after the ambush of Reasoner's patrol–I was a helicopter pilot in HMM-365, the same squadron that Si Kittler served with in Vietnam when he rescued the Reasoner patrol.

For their actions that day, First Lieutenant Reasoner was awarded the Medal of Honor posthumously, Corporal Collins was awarded the Navy Cross Medal, our nation's second highest award for valor, and my father-in-law was awarded the Distinguished Flying Cross Medal for valor.
As gruff and larger-than-life as Staff Sergeant Collins was, Colonel Kittler was just as low-key, although he exuded a compelling presence and upright bearing. His leadership style was patient and diplomatic, but he was also committed to maintaining high standards and the traditions and ethos of the Marine Corps. As different as these two men were, they both shared a keen sense of humor and were both extraordinarily humble about their heroism.
Each man's story is remarkable, made even more so by the fact that they are woven together forever in history. It's an honor to have served with and known two of these three great Marines.