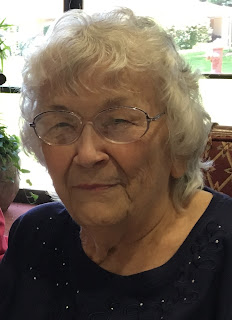 At a little after 4:00 this morning, I woke up and checked my phone to see if I had missed any calls or had any messages. For the past few days, we knew that Mom was fading and wouldn't be with us much longer. There were no missed calls and no messages on my phone so I got up to get a drink of water before I returned to bed. In a few hours, I'd get up and visit Mom at the healthcare facility where she was staying.

I got my drink and started back toward the bedroom when my phone rang. I walked to the bedside stand and picked up my phone. I didn't really need to see who was calling or answer it to know the reason for the call. Not at that hour, and not under the current circumstances. My suspicion was quickly confirmed when my brother spoke from the other end of the line. He told me that Mom drew her last breath and passed away at 4:11 am, at about the same time that I woke and checked my messages.

I got dressed and headed for the healthcare facility. On the way, I called my sister who was sitting with Mom when she passed away. I asked her how it was for Mom at the end and she told me that Mom passed away peacefully. That was a relief. Mom had been in a good deal of pain so it was comforting to know that her transition to a pain-free eternity was a gentle one.

She was 83 years old which, the older I get, increasingly seems to be a fairly young age. Still, she had a long and good life, and she made the most of her years.

She was born in Lead, South Dakota on October 28, 1937, the daughter of a gold miner in a family of Italian immigrant miners. The lineage of miners lasted until the Japanese attacked Pearl Harbor and drew the men of her family away to serve their country. Meanwhile, her mother packed up her four young kids and drove from South Dakota to take up residence in Mom's grandmother's basement in San Diego, California to be closer to Mom's father who was part of the rebuilding effort in Hawaii. When her father returned home, the family moved into the projects in Oakland until her parents earned and saved enough money to afford a home.

Mom's parents had just purchased a home in Oakland and she was working as a waitress at Zerikote’s Lake Merritt Dining Room when she met a young U.S. Marine sergeant who had just returned from service in Korea. He was staying with the family of one of Mom’s co-workers when they started dating. After a whirlwind romance, Mom married my Dad on November 25, 1955 in Kingman, Arizona.

After Dad was discharged from the Marine Corps, he entered college in the Chicago area where they both worked while Dad attended college. Mom worked as a clerk-typist for Remington Rand. Then after my brother and I were born, she went to work as an IBM key punch operator and bill clerk for the Chicago, Burlington and Quincy Railroad.

After my sister was born, our young family moved to southern Illinois where Mom was active in the PTA, became the chapter president, and gave birth to my youngest brother. Mom worked off and on as my Dad's assistant in his office for a few years before deciding to pursue a career in education. To realize that goal, she commuted to Charleston, Illinois and earned her bachelor’s degree at Eastern Illinois University.

When Dad's health led them to move to Bullhead City, Arizona, Mom got a job at Mohave High School to teach business education and supervise the school’s cooperative education program. Soon afterward, she earned her master’s degree from Northern Arizona University and her supervisor, principal, and superintendent certifications from the state of Arizona. As if she didn't already have enough to do, she taught evening classes at Mohave Valley Community College and Northern Arizona University in addition to her regular high school teaching duties. She later became a school district administrator as Director of Special Projects and Vocational Education where she wrote grants and administered the programs they funded.

When she retired from education in 1996, she moved to Cantonment, Florida to be near her family. The move also gave her the opportunity to pursue another passion as she served as a USO volunteer in Pensacola. In 2009, she was named USO Volunteer of the Year and was saluted as an “Angel in Our Midst” on WEAR-TV 3 for her selfless service as a USO volunteer.

Mom was also an extraordinary creative talent. She played the piano, quilted, and sewed, but she really blossomed when she took up doll-making in her later years. She built them from scratch. She fired them, painted them, put them together, and she even created their costumes from bolts of fabric using her sewing machine. She did all of that with amazing skill despite painful arthritic hands and poor eyesight. As difficult as it was for her, she stayed at it because she loved doing it. And she was very good at it.

Mom's childhood was heavily influenced by hard work and the perseverance of a family that scratched and sacrificed for everything it had. She married young and worked tirelessly to help her husband succeed while she helped feed, clothe, house, and raise their children, which she did with great devotion. Then, she proved that a person could accomplish all of those things then still find the energy, drive, and initiative to carve out and find success in her own professional career.

I'm fortunate to have been raised by such a woman, and my family is fortunate to have had her in their lives. Mom provided an excellent example for all of us through her courage, her determined spirit, and her unflinching faith in God, all of which she held onto until she drew her last breath.

I will miss her.

Posted by Rob Doss at 11:07 PM
Email ThisBlogThis!Share to TwitterShare to FacebookShare to Pinterest