Comin' Around to Bite You

I went in to Best Buy the other day to shop for a new laptop computer. 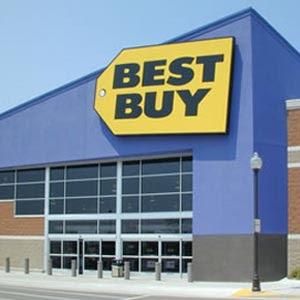 The Circuit City store that we had in town was a casualty of that company's recent bankruptcy, so it closed and left us really with just one major electronics store in Pensacola. Although I generally shopped at Best Buy when the Circuit City store was open, the advantage of having both nearby was a benefit to me as a consumer.

I tend to be very deliberative when buying "big ticket" items like computers. I want to get the right one for the job and I don't want to regret having bought the item, either because I didn't need it after all or I should have purchased a different one. So, I tend to ask questions and compare items, then I'll frequently go home and sleep on it.

So, while I was in the "shopping" phase, I approached a sales clerk and asked him what he thought the best multi-tasking llaptop computer manufacturer they carried was and he told me as he breezed past me. Then, he paused, turned part of the way around and said, "just like I told you before." Not that it mtters, but I hadn't asked this question before, but apparently someone had. To make a long story short, I told him and his supervisor that those kinds of remarks are unnecessary. The clerk didn't get it; in fact, he didn't want to hear it at all (which is why I ended up talking to his supervisor). I'm not sure the supervisor really got it either because he didn't give me any sense that he found the clerk's remarks inappropriate.

I returned to the store the following day and bought the computer anyway. If I had had the sense that this was an institutional cultural failing, I probably would have found another way to buy the computer, even if it meant shopping online. My experiences the following day will probably now move me in that direction.

So, I bought the computer and took it home. I pulled it out of the box and started setting it up. As I laid my hands on the keys, my forefingers rested on the two keys with the raised reference knobs and I starting typing to set the computer up. I looked at what I had typed and there were all kinds of typos. I tried it again and got the same result. I looked down at the keyboard to see what my problem was and found that the raised knob that was supposed to be on the "j" key was on the "k" key. 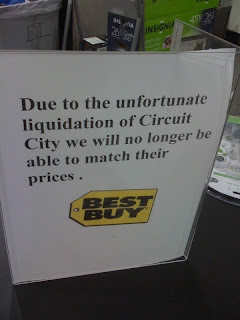 I called the Best Buy Geek Squad (their resident technology experts) at the local store and told the guy what I discovered. After I described the problem, he said "okay...", I guess waiting for me to explain why that was a problem. I explained it to him and he said, "they've changed the typing rules." Let me say that again. He said, "they've changed the typing rules," which means he wanted me to believe that the reason my reference knobs were on the wrong keys was because the Lords of Typing had gotten together and decided to change how a person rests his hands on the keyboard and had thus influenced Toshiba to change their keyboard accordingly.

Well, I had test-driven one of these in the store, so I was pretty sure he was mistaken. After being patched through to the sales floor, I was able to confirm that my machine was an anomaly - no change to the typing rules.

I write all of that to say that it is possible that Best Buy is becoming complacent in light of the failure of its primary competitor. If that trend is institutional, Best Buy will go the way that Circuit City did once a new competitor shows up in the marketplace. It might not be for another 10-15 years, but poor customer service is a very good motivator for new enterprise.

Here's an example. We have a Home Depot near our home and the service there was TERRIBLE. About a year or so ago, Lowe's opened a store right next door to it and they're knocking the business stiff. You can't hardly take a step in a department there without having someone greet you or ask you if you need help. Service works. 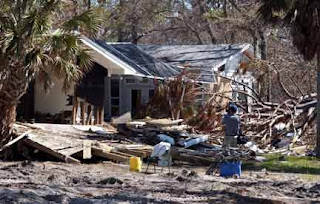 I remember after our last big hurricane (Ivan), there was a lot of tree clearing and roof work that needed to be done all throughout the area. There was a lot of business to be had if you were in the business and ready to do the business. Unfortunately, a good number of these businesses didn't see the business for what it was and saw it instead as a windfall that made them complacent with regard to returning phone calls, bidding reasonably, and so on. Well, the roofs are fixed and the trees are cleaned up now and what these companies have discovered is that the roofers did about 15 years of business (because that's how long a roof lasts, generally) in 6 months and the tree trimmers did about 5 years of business in the same period of time. There was no windfall; it was simply an advance on business. Many of them behaved as though they had a windfall and behaved like they were high rollers and divas. Now, we're in tougher economic times and the bite is particularly hard for them. 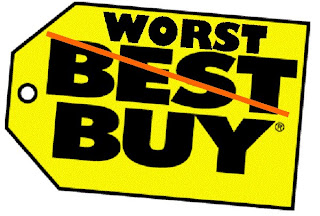 The moral is that business cycles are unpredictable, and specific consumer reactions to customer service tend to vary with these business cycles. However, one thing that doesn't change is consumer memory. When the marketplace presents options - which it always does in a market economy - consumer memory of past experiences plays a significant role in determining consumer behavior.

For businesses, another way of understanding the business cycle from a productivity standpoint is to remember these words: "what goes around, comes around." My advice to Best Buy and other businesses today is not to allow yourself to become complacent in our current economic climate, and to take care that your actions and attitudes today don't come around to bite you later.
Posted by Rob Doss at 12:11 PM
Email ThisBlogThis!Share to TwitterShare to FacebookShare to Pinterest