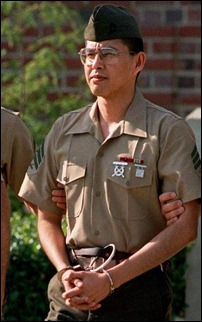 Clayton Lonetree was a Marine sergeant serving as a security guard at the United States Embassy in Moscow in the early 1980s. It was a particularly sensitive post during the Cold War, one the Marine Corps exercised a good amount of care in filling.

As one might expect, being an embassy security guard in the Soviet Union in those days was an isolated and difficult position, especially for a young 25-year old.

But Sergeant Lonetree was up to the task when he was selected for it, and he remained good for it right up to the point that he met a Russian woman while on liberty. He probably didn’t realize she had noticed him long before he noticed her.

Although Sergeant Lonetree had been warned about situations like these, he couldn’t believe the warmth and companionship he found in the Russian woman was a ruse. She seduced him, then she blackmailed him, sending his life and his aspirations into a sudden and dramatic tailspin. Before it was over, Sergeant Lonetree had sold blueprints of the embassies in Moscow and Vienna and revealed the names of intelligence agents working in the Soviet Union.

He sold out his country, not because he dreamed of being a spy or because he set out to betray the nation he served. He did it because he was duped, sucked in, ensnared by a female Soviet agent who understood that all she had to do was establish a forbidden relationship with the young Marine and turn it against him.

Such a relationship was forbidden, not because the U. S. government had something against young Russian women or because it wanted to meddle in the private love lives of its Marines. It was forbidden because the government understood how minor indiscretions by people in sensitive positions are easily leveraged against them and against the interests they’re supposed to protect.

It was a well-worn caution for everyone who served on active duty in those days not to allow yourself to become compromised. One’s integrity was guarded not only for reasons of character, but also because agents have a way of exploiting small indiscretions and threatening to turn them into humiliating revelations if not kept quiet by “small” favors that ultimately crescendo into larger ones. It worked on Sergeant Lonetree.

Ultimately, he was caught, then he was court-martialed and convicted of espionage. He was sentenced to 30 years in Leavenworth, reduced in rank to private, awarded a dishonorable discharge, and fined $5,000.

The Commandant of the Marine Corps petitioned the Secretary of the Navy for some leniency because the impact of his betrayal was relatively low and because he was not a traitor but a young man caught up in “the lovesick response of a naïve, young, immature and lonely troop in a lonely and hostile environment.”

Ultimately, Lonetree’s sentence was reduced to 15 years. In the end, he was released after serving 9 years, but the scar of the dishonorable discharge and the brand of “traitor” persist.

I remember the Lonetree case because I was a Marine while he was on trial, and the whole thing was an embarrassment to all of us. His betrayal of our country was an affront to our Marine Corps culture and all that we stood for. Still, though, we understood how wicked the trap he was caught up in was. No one believes it can happen to them until it does.

I think of him every time officials of our government get caught up in sex scandals and I hear the media, pundits, and citizens defend them on the grounds that their sex lives are “private matters.”

I do think about how they’ve disappointed thousands of people who expected and deserved better of their elected representatives.

But I think most about Sergeant Lonetree and how easily he was compromised with so little to be bartered and used against him by the spies who “owned” him. He wasn’t wealthy, he wasn’t married, and he didn’t have property or a famous name. He was a simple Marine. He was quite unlike our sophisticated millionaire politicians who seem to have so much more to lose than he did, but then again, in some ways he seems very similar to them.

I think of Sergeant Lonetree, then I consider how easily compromised a politician with access to secrets, a vote, and a microphone with which to sway others would be if he was to be dumb, arrogant, and careless enough to e-mail nude photographs of himself to women he’s never met. It would be a cinch to turn that kind of guy, almost too easy.

I think about how easy it would be to get to such a politician if he was foolish enough to make a “pass” at someone under a bathroom stall door, or have sex with an intern in his office or a House page in his apartment, or patronize high-class escort and prostitution services.

What would such a politician give in exchange for a well-kept secret? And once the blackmail is taken, what would he give to keep two secrets quiet? At what point does it stop being a question for him and start becoming a process, a normal way of doing business?

I don’t care what these guys do in their private lives, but I do care about how easily compromised they are and how oblivious they seem to be – or would like us to believe they are – about the prospect of it. Moreover, sex isn’t the only way our officials become exposed to blackmail, and our foreign enemies aren’t the only ones they have to worry about doing it to them.

It doesn’t take much for a compromised official to become corrupt beyond repair (and counseling). Until we realize what these “private” issues and poor choices really mean to us, we’ll continue to deserve the government we get.

I hope we catch on soon.

Posted by Rob Doss at 8:53 PM
Email ThisBlogThis!Share to TwitterShare to FacebookShare to Pinterest 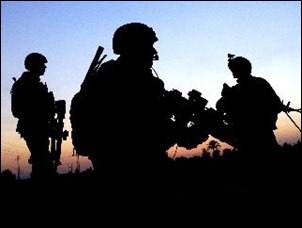 There’s a piece posted on foxnews.com, originally broadcast on the Fox News Channel the other day, about a military father who’s facing foreclosure on his home (“Hero Faces Foreclosure”). The story begins with the words, “All he wants to do is welcome his son home from a tour of duty in Iraq.”

To be clear, there is nothing about his military son’s service, his experiences in Iraq, his financial contribution to his father’s domicile – nothing – that links his service to his father’s financial position. The story was clearly an attempt to leverage for sympathy the military tour of duty of the son of a guy who’s enduring a foreclosure experience he shares with thousands of other Americans.

The father has been fighting with his bank over his attempt to take advantage of the government’s home mortgage modification plan. Somehow, his son’s military service – which has no bearing on the issue – has become woven into the story.

For the benefit of those who might read this and not know, let me make a disclosure, lest they think I’m being cold-hearted about what I’m going to write here.

I retired from the Marine Corps after 24 years and served combat tours in four different conflicts. Both of my sons are Marines. The oldest has deployed overseas twice and his brother deploys in the fall. I understand what I’m going to write about as both, a service member and a father of service members.

With that out of the way, let me say that there is absolutely nothing about being the father of a deployed military person that should suggest your responsibility to meet your debt obligations are different from everyone else’s.

Let me take it a step further. Unless a military person’s deployment causes him or her to fail to meet an obligation, he or she shouldn’t expect to be excused from it. The military hierarchy itself expects its members to be financially responsible. When there are extenuating circumstances that arise beyond the service members’ control due to their service, the military hierarchy does a pretty good job of advocating for them, but it otherwise expects members to stand on their own feet and meet their obligations.

There are also a number of excellent laws in place to protect vulnerable military members such as the Soldiers and Sailors Civil Relief Act. While not perfect and complete, the government does a pretty good job of keeping deployed military people from being exploited.

I don’t care much for well-intended efforts in the media and among politicians to take up for military members when it wasn’t the military person’s service itself that caused the hardship. Doing so makes our military people seem whiny and inept, and the vast majority of them are not. It also has the potential to diminish the public’s perception of the military person’s ability to balance military duties with everyday civilian issues and challenges when the vast majority are more than capable of handling them.

I would advise military members and parents of military members who complain too much about not being appreciated at home that their complaints are really off target today. Today’s military members are not fighting the “Forgotten War” that our Korean War veterans fought, and they’re not being mistreated when they return home like many of our Vietnam veterans were. Americans have come a long way in that regard.

Especially considering today’s climate at home, I would also counsel military members and their parents that too many complaints about not being appreciated is unbecoming of a person who truly understands the nobility of service and sacrifice. Fussing too much about one’s service (and giving) tends to diminish the sense of good in what’s been done. Parents should also understand that complaining about their service member’s circumstances – whatever they are – detracts from the virtue of what their children have done.

Service is what it is, and it is valuable in and of itself whether it’s appreciated or not. The only things that can diminish the good in service are actions that make it cease to be selfless.

Posted by Rob Doss at 9:59 AM
Email ThisBlogThis!Share to TwitterShare to FacebookShare to Pinterest