The Axis of Naïveté 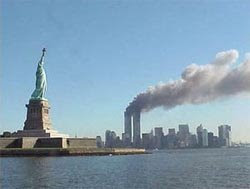 Some political pundits who are trying to help us find a way to appreciate the tepid U. S. response to the democratic crisis in Iran are saying that the American response is best appreciated when contrasted to the previous Administration's reckless "Axis of Evil" references in the aftermath of the 9/11 attacks.
We have unfortunately forgotten much about that day in 2001 and the events leading up to that day. Let's remember that the World Trade Center was attacked on the morning of September 11, 2001 in which 2,974 people were killed in New York City. This attack had been preceded by the 1993 bombing of the World Trade Center in New York, the 1996 bombing of the Khobar Towers in Saudi Arabia, the 1998 bombings of the U. S. Embassies in Tanzania and Kenya, and the October 2000 attack on the USS Cole in Yemen.
George W. Bush was inaugurated in January of 2001 and in September, the World Trade Center was attacked and toppled. Almost immediately, President Bush announced the Global War on Terror and made sweeping announcements about the United States' intention to root out terror in the world. Troops were committed to Afghanistan in an intial attempt to rout the influence of al-Qaeda and the Taliban in Afghanistan. Four months later, he delivered his first State of the Union Address. It was in that address that he made the troublesome reference to "The Axis of Evil."

[Our second goal] is to prevent regimes (terrorist) that sponsor terror from threatening America or our friends and allies with weapons of mass destruction. Some of these regimes have been pretty quiet since September the 11th. But we know their true nature. North Korea is a regime arming with missiles and weapons of mass destruction, while starving its citizens. Iran aggressively pursues these weapons and exports terror, while an unelected few repress the Iranian people's hope for freedom. Iraq continues to flaunt its hostility toward America and to support terror. The Iraqi regime has plotted to develop anthrax, and nerve gas, and nuclear weapons for over a decade. This is a regime that has already used poison gas to murder thousands of its own citizens—leaving the bodies of mothers huddled over their dead children. This is a regime that agreed to international inspections—then kicked out the inspectors. This is a regime that has something to hide from the civilized world. States like these, and their terrorist allies, constitute an axis of evil, arming to threaten the peace of the world. By seeking weapons of mass destruction, these regimes pose a grave and growing danger. They could provide these arms to terrorists, giving them the means to match their hatred. They could attack our allies or attempt to blackmail the United States. In any of these cases, the price of indifference would be catastrophic.

I thought about rehashing all that Iraq, Iran, and North Korea had been involved in that brought them to light during that address, but I don't think it's really necessary at this point. 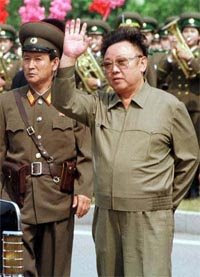 Let's do this instead. Let's think of the events and incidents that have occurred in Iran and North Korea since January of this year. It's been since January that we have attempted to implement a foreign policy approach that engages these despotic regimes without precondition and without the hint of a suggestion that the Axis of Evil reference was really ever accurate.
Suddenly, though, we can't engage them in any kind of positive manner because these two nations have become so provocative and so antithetical to meaningful diplomatic discourse that diplomacy has now been reduced to squabbling in the press. They say we're interfering, and we say they're not to be taken seriously...
We have gone to great lengths over the past six months not to offend and it's getting us nowhere. In President Obama's inaugural address, he avoided references to terrorism and instead spoke of our "war against a far-reaching network of violence and hatred."
By March, the Defense Department officially changed the name of the military operation our troops had been engaged in since 2001 from the "Global War on Terror" to the "Overseas Contingency Operation." Meanwhile, the terrorists are still at work.
Again, let's think about all that these two nations that President Bush designated as two of the players in the Axis of Evil have done over the past several months. Did Bush's 2002 State of the Union Address have these two nations right? If it did, are we now behaving as though we're fairly indifferent to it all, and are these two nations exploiting the change?
Former President Bush warned that "the price of indifference could be catastrophic." Indeed, if we get this wrong, we might one day find ourselves pointing the finger at our own Axis of Naïveté. Let's hope we pull it together before that happens.
Posted by Rob Doss at 8:30 AM
Email ThisBlogThis!Share to TwitterShare to FacebookShare to Pinterest