The Henry Letters: A Case for Impeachment? 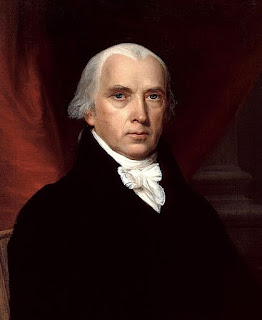 Founding Father James Madison is sometimes called the "Father of the Constitution," and rightfully so. He authored 29 of the 85 articles that comprise the Federalist Papers, written to argue the case for a constitutional form of government. After nearly four months of strenuous debate, deliberation, and compromise, Madison sat down and drafted the U. S. Constitution to replace the Articles of Confederation which many considered inadequate and a confederacy to be a weak structure for the newly independent United States.

His words live on today as his name was mentioned 17 times during the testimony of three Constitutional experts before the House Judiciary Committee hearing on the impeachment of President Trump on December 4, 2019.

One of those experts reminded us of a speech that Madison delivered at the Constitutional Convention on July 20, 1787 when he said that impeachment was "indispensable" “for defending … ag[ain]st the incapacity, negligence, or perfidy of the Chief Magistrate.” Madison told the assembled delegates to the Convention that an American president might "pervert his administration into a scheme ... or ... betray his trust to foreign powers," warranting consideration for impeachment.

As Madison contemplated the impeachment of a future president while he drafted the Constitution, maybe he imagined a scenario where a president might find himself in a desperate struggle in a domestic and foreign crisis and then might resort to dramatic means to achieve his objectives on behalf of the nation. Maybe he foresaw a scenario involving the offensive trade practices of a powerful nation or a foreign nation's arousal of unrest and even treasonous impulses in the  American countryside.

In that scenario, Madison might have envisioned that events could develop where American ships, cargo, and crew would be seized, as was entirely realistic in those days, and that in response, the United States might unsuccessfully attempt political solutions and embargoes to stop it. But then, let's say that the embargoes hurt American businesses more than they damaged the nations they targeted which deepened the divisions among Americans and made an easy solution even more challenging for the president. Let's assume that Madison contemplated that eventually, the president might decide that war would be the only effective solution but that gaining approval from Congress to go to war would be a difficult sell among partisans who believed that the president had ulterior motives.

Then, let's say that Madison imagined a situation where a president in his political frustration might eventually come to rely on a former foreign spy at the encouragement of an official of yet another nation to provide him evidence of treason among his political opponents that included a dramatic plan for several states to secede and align with the enemy.

But what if the president failed to confirm the motives and the validity of the evidence that the spy provided him? What if the president took that evidence and used it to go to Congress to solidify his allies and stir up anxiety to help make the case for going to war and undermine his political opponents? What if the evidence that the spy provided him turned out to be fraudulent? What if only a few months after providing Congress that evidence, he succeeded in getting Congressional approval for a declaration of war?

Then, what if that war made its way to American soil as it did during the War of 1812, a mere 25 years after Madison delivered his Constitutional Convention speech and, as in the War of 1812, what if enemy forces attacked American settlements throughout the countryside and then burned Washington - the White House, the Capitol building, and other government buildings - to the ground? In Madison's time, that was certainly a possibility. How would Americans and the Congress view a president's drive to go to war in light of that disaster?

Is that the kind of scenario that Madison would have anticipated would rise to the level of an impeachable offense committed by a president? At what point would a president's reliance on the unvetted documents from a former foreign spy that alleged a broad conspiracy designed to tip the scales toward war amount to "negligence or perfidy" (untrustworthiness) or a "scheme" to "betray his trust to foreign powers" as Madison described it in his speech to the Constitutional Convention?

Madison might not have actually anticipated a scenario such as that when he was drafting the Constitution and while he was making the case for congressional impeachment powers because if he had, he might have foreseen those very events occurring during his own presidency 25 years later.

As the calendar turned to the year 1812, President Madison and his party generally came to lean toward declaring war against the British because political solutions and embargoes designed to halt their practice of capturing American ships and cargo and pressing American sailors into service weren't working. The President's political opponents, the Federalists, had opposed the Embargo of 1807 during Jefferson's administration and wanted no part of the growing interest in going to war with Britain, even as the British were alleged to have been stirring up Indian unrest on the frontier.

The embargoes lacked bipartisan support and were losing steam among the American people, in large part because they hurt American commerce more than they damaged the British. The embargoes were devastating domestically at a time when the New England states were establishing themselves as ports and centers of trade and while American pioneers settling in the Ohio Valley relied on that commerce for survival. War seemed to President Madison and his political allies to be the only answer, but his opponents believed that war would damage the fragile American economy even worse than British aggression toward American shipping and the American embargoes had.

Meanwhile, a man by the name of John Henry had completed service as an American military officer and had begun writing articles as a propagandist for the Federalist Party that were critical of the American republican form of government. We remember that in first quarter of the 19th century, the debate over the adoption of the Constitution was still fresh and there was still a belief among fiercely independent Americans that the United States should have remained a confederation rather than a constitutional republic. They feared and distrusted a strong federal government.

In time, Henry's writing came to the attention of Sir James Craig who was a British military officer and the Canadian Governor-General. The British and their representatives in Canada were concerned about Jefferson's and Madison's ambitions with regard to Canada at that time. Seeing an opportunity amid rising tensions, Sir Craig hired Henry as a spy to determine the extent to which other Americans shared his dissatisfaction with the American government. Henry reported to Craig frequently and at one point wrote that if there was war between the United States and Britain, the New England states, in alignment with Federalist sympathies, would break away and join the fight against the Union. As a reward for his work on Britain's behalf, Craig promised Henry that he would be named to an office in Canada once his work was finished. Henry continued to gather and provide information, but then Craig died before he could deliver on his promise to Henry.

Undeterred, John Henry traveled to Britain to petition the crown for his reward, but he was unsuccessful so he left for home feeling deceived and abandoned by the British government. On his return trip to the United States from London, he happened to meet a French count, Edouard, Comte de Crillon, to whom he told the whole story. Crillon was apparently moved and suggested that Henry sell his documents to the American government. Henry agreed so Crillon approached the American Secretary of State James Monroe on Henry's behalf with a proposition to sell the documents to the Madison administration.

The documents included the secret instructions that Henry had received from Sir Craig and copies of the letters that Henry wrote in the performance of his spying mission. However, Henry had doctored the documents to omit names of his Federalist friends and he deleted other entries. He also added material that indicated that Henry had become aware of plots for states to secede from the Union.

President Madison agreed to purchase Henry's documents - "The Henry Letters" - for $50,000, the entire budget that Congress had approved to fund the secret service. Crillon agreed to compensate Henry further by granting him his ancestral estate in France. Then after the sale, Henry secured transportation on an American warship out of the country to France so he could claim his newly acquired estate.

On March 9, 1812, President Madison took Henry's papers which made the scandalous allegations against the Federalists and Great Britain and delivered them in a special message to Congress. He claimed that while the United States was negotiating in good faith with the British, they were secretly using a spy to destroy the Union.

Many believed that the allegations were false while others became quite agitated and concerned over them. Ultimately, the Henry Letters were found to be fraudulent and Madison's strategy failed. Nonetheless, three months later the United States was at war with Britain in a war declaration that was and remains the most narrowly decided in American history.

President Madison was later heavily criticized for not vetting the fraudulent documents that Henry sold him before using them to steer the Congress and the American people toward war.

John Henry came out on the short end of things as well. It turns out that the French count who encouraged him to sell his documents to the President and from whom he acquired the estate in France was a fraud. He wasn't a French count and there was no estate. It was suspected but not proven that the "count" worked for Napolean who used the scheme to distract the British with involvement in a war with the United States while Napolean invaded Russia. Crillon had not only duped Henry but also President Madison and Secretary of State Monroe.

We often look to the words of historical figures to provide us insights relevant to current events, but we frequently fail to recognize that history is much more than snippets and quotations. It's a story that involves real people who make real and imperfect decisions and choices. Those imperfections should inform us that the snippets and quotations are meaningful guideposts and aspirations, but they can also imprison us in destructively narrow thinking when we mischaracterize them or fail to consider their context and design.

I wonder how Madison himself would have fared as president today.
Posted by Rob Doss at 8:40 AM
Email ThisBlogThis!Share to TwitterShare to FacebookShare to Pinterest