A Visit with Dad 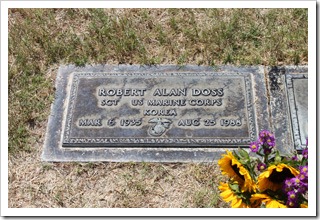 I’m in Arizona today with my brother, Michael, to visit our father’s grave site. Not everyone would understand why we would make such a long trip to the desert to do that, and I’m not sure if I can do a great job of explaining it, but I’ll give it a shot.

I was on a deployment to the Mediterranean aboard the USS Guam in early 1988 when I received a Red Cross message letting me know that Dad had been diagnosed with terminal cancer and that his prognosis didn’t see him surviving the duration of my deployment. My squadron commander didn’t hesitate to let me to go ashore in Italy to catch a hop to Rota, Spain in order to catch another aircraft to the United States so I could fly to Arizona to see him.

It was about Easter time and all of his kids and young grandkids were there to visit as well. It was nice.

He had served in the Marine Corps during Korea for three years before leaving to go to college. He always lamented not staying in the Marine Corps, but I think he was able to sort of experience a Marine Corps career vicariously through me, though. Celebrating my career’s conclusion was going to be special for him.

As my visit with him was drawing to a close and I needed to get back to Europe, I knew that I probably would never see him alive again. I had four months left to go on that deployment. I put my uniform on for the trip back then grabbed my things to leave my parents' home for the airport. As we stood toe-to-toe for a final hug goodbye, he reminded me that he had always said that it wasn’t fair for a dying person to make deathbed requests, but that he had one to make of me anyhow.

Of course, I stepped up to it and he told me what it was. He asked if, once I retired, I would put my dress blue uniform on, visit his gravesite, and drink the whiskey from that decanter with him. I didn’t say anything…because I couldn’t. I stood there in his house in my uniform and I was afraid that if I said anything, I’d start bawling. That wouldn’t do. Instead, I hugged him long and hard until I was sure that I had it together.

When we separated from the hug, he stepped back and studied me from head-to-toe then back up again as though he was trying to memorize every inch and feature. Then, he looked me in the eye entirely composed, came to attention, and snapped a Marine-perfect salute to me. Well, Marines don’t salute indoors unless they’re “under arms” (with a weapon or on duty), but with him standing there holding his salute, I carefully placed my cover (cap) on my head and returned his salute.

We hugged again and I walked out through the door to the car. I watched him for the last time as we drove away.

I made my way back to Europe and rejoined my squadron. We performed a number of exercises in Italy, Sicily, Sardinia, Tunisia, Spain, and Israel and then it was time to head back to the States. As we traveled back across the Atlantic and approached Bermuda, I received another Red Cross message, this one advising me that my Dad had passed away. We were only two days from getting off of the ship.

My CO asked me if I wanted to get off at Bermuda or stay with the squadron to North Carolina. I knew that I wouldn’t get to Arizona much sooner via Bermuda than if I waited an extra day, so I told him that I’d like to stay with the squadron on board the ship. Normally, a pilot who has experienced a death in his immediate family is promptly removed from the flight schedule because his focus isn’t quite balanced, but my CO asked me if I’d like to fly a helicopter off the ship on the fly-off day as I normally would. I thanked him for the consideration and told him that I would really like to stay in the mix and fly one off the ship. So, I did.

I rejoined my family and we flew to Arizona the following day for Dad’s visitation and funeral.

Another ten years passed before I finally retired from the Marine Corps. Once I retired, I purchased a business services franchise and that involved some training in San Diego. I decided that while I was in San Diego, I’d travel to Bullhead City, Arizona to close the loop with my Dad.

Dressed in my dress blues and carrying a little camping stool and that Tun Tavern whiskey decanter, I found my Dad’s grave site where I sat and drank that whiskey with him. Once we had our time together, I said my goodbyes, got back into the rental car, and drove off to the local VFW (Veterans of Foreign Wars) post. A detachment from that post had graciously served as ceremonial escorts and pall bearers for my Dad’s burial ten years earlier.

I walked in – it was a Saturday night so the place was full of people – and I sat at the bar there in my uniform. I drank a beer and made a little small talk with patrons who weren’t used to seeing a Marine officer’s uniform in the middle of Arizona. Then, I took my metal “life member” VFW membership card out of my wallet on plunked on it on the bar. Everyone within earshot recognized the sound; it meant that someone was buying a round of drinks. The bartender asked if I was aware of what that meant and I said that I was. I bought everyone a round of drinks and when they had their drinks, I offered a toast to them and to my Dad. The band that was in there that night got involved and played a countryfide version of the Marine’s Hymn. What a day and what a memory that was.

My visit with Dad today wasn’t quite the same as that because the earlier visit was a very unique and special occasion. I doubt that I’ve offered a very good explanation of why I felt compelled to travel to Arizona with my brother to visit his gravesite today, but maybe you have a sense of the depth of the relationship my Dad had with his family. That relationship has still not ended. Maybe that’s the explanation I’m looking for.

Posted by Rob Doss at 7:10 PM
Email ThisBlogThis!Share to TwitterShare to FacebookShare to Pinterest