In Such Cunning Disguise

"History repeats itself, but in such cunning disguise that we never detect the resemblance until the damage is done." —Sydney J. Harris

Inflation, the U.S. dollar’s volatility, unemployment, and an increase in the U.S. money supply...

In spite of the concerns we have when we watch the morning news, we Americans tend to believe that our long-term outlook is good because, as we interpret our relatively brief history, we're Americans and we always come out on top. But the history of the world has many examples of great empires and nations whose leaders felt the same way, but turned out to be wrong.

We can look, for instance, to the Roman Empire which enjoyed 200 years of prosperity until it collapsed over the course of the next 300 years. But the machinery of the collapse didn’t begin during the final 300 years of the Empire. It started long before with sometimes short-sighted economic and monetary policies and practices. Then, incrementally, their excesses, the border incursions, and the need to defend the Empire's vast territorial interests set the table for rougher times ahead.

The Roman Empire was born with Octavian’s defeat of Antony and Cleopatra at the Battle of Actium in 31 BC. The victory cleared the way for Octavian to become Rome’s first emperor (27 BC-14 AD) and for him to be awarded the title “Augustus” by the Senate and the People of Rome. It also heralded a period of financial stability after centuries of turmoil and a loss of confidence in the government and the economy under the Roman Republic. Money that had been hoarded returned to circulation, coinage molded from precious metals from conquered Egypt was minted and circulated, and property rights were restored and protected. With that prosperity came the liquidation of debt and a decrease in interest rates.[1] The early Roman Empire was also able to improve the roads throughout Italy, and build aqueducts, public buildings, and temples. It was the Pax Romana, Rome's golden age.

However, even during that period of good feeling, after Augustus died and his stepson Tiberius became emperor (14-37 AD), Augustus’ public works program was reduced which stalled the circulation of cash in the Roman economy, leading to a financial crisis and a severe shortage of money in 33 AD. The financial crisis persisted until the government issued large loans at zero percent interest in order to get money flowing through the economy again.[2] 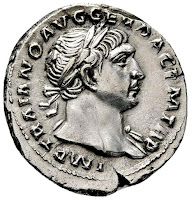 Then under Nero (54-68 AD), the economy slowed while the cost of maintaining the army and the government increased, so rather than increase the amount of money in the economy by raising taxes, he debased the denarius instead.[3] Debasing the currency by reducing the silver content in the coinage enabled the government to use the same amount of silver to introduce more currency into the economy.

The result brings to mind Gresham’s Law, an economic principle that says that “bad money drives out good.” For the sake of this discussion, it means that money that has high "real" value—for instance, coinage that hasn’t been debased by reducing its valuable content—will be hoarded and disappear from circulation while debased coinage of the same face value is traded in the economy.[4]

With the purging of the high-value currency from the marketplace, it was the debased currency that made its way back into the treasury when taxes were collected. People would pay their taxes with the currency that contained the lower silver content[5] which meant that the government’s “real” tax revenues were lower than the value of the currency it received.

Still, there are many economists who believe that the purity of the denarius was largely irrelevant in and of itself as long as people still traded the debased coin as "the real thing."[6] The essential issue with debasement arose in the decision to increase the money supply as a result of debasement. That contributed to inflation which is what did the real harm to the Roman economy.

Today, we essentially accomplish debasement by printing more money than the marketplace warrants, which has many of the same effects on our economy as traditional debasement. The increase in currency drives up demand for goods and services and when the availability of the goods and services and the availability of labor to deliver them is limited, prices go up. As the Romans saw, the result is that although there is more currency in circulation, consumer purchasing power decreases, resulting in inflation.

Real pressure on the Roman economy increased with the end of Trajan’s reign (98-117 AD) which also marked the end of Rome’s territorial expansion.[7] For Rome’s economy, that meant that it could no longer depend on increasing revenue from new territorial acquisitions for its stimulation. The Empire would have to begin paying its own way without the benefit of new revenue from the outside. 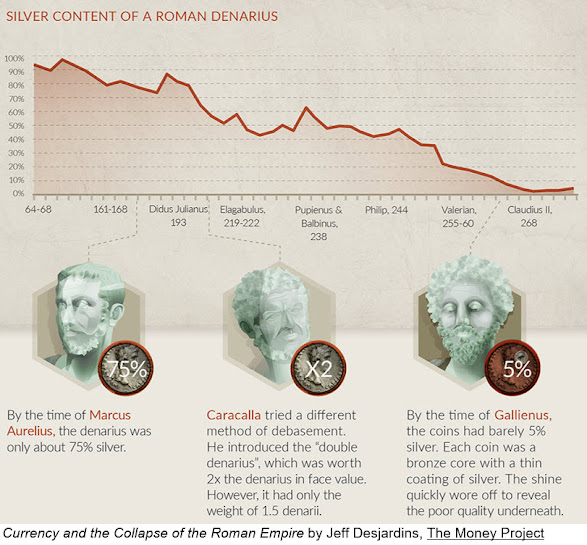 The government also tried to generate revenue by raising taxes on the wealthy and expanding citizenship to create more taxpayers. However, as more and more private wealth within the Roman Empire was confiscated through taxation of the wealthy, economic expansion suffered even more.[9] Then, when the wealthy couldn’t pay enough taxes to fund the government, the tax burden shifted to the lower classes.[10]

Thin on options, the government began accepting in-kind tax payments: cattle, grain, and other goods from farmers, for example. The government needed people to produce so they were often required to work and remain in their occupations, and farmers were tied to their land so they could continue to produce agricultural goods.[11] Not surprisingly, the wealthy did what they could to conceal their wealth from the Empire and appear to be as poor as they could so the government wouldn’t confiscate what they had.[12]

As the government failed to effectively control the economy through its manipulation of the currency, markets, and citizen rights, government revenue shrank further, tax rates increased, tax revenues fell, and inflation took its toll as growth slowed further while the treasury couldn’t adequately pay and equip the army.[13]

Citizens eventually began to move into the countryside and engage in simple subsistence farming so they could provide for their own needs and stay out of the marketplace altogether.[14]

Finally, many small landowners collapsed under their tax burden and went to work for large landowners as tenant farmers or as slaves since slaves paid no taxes. The practice of resigning oneself to slavery became so harmful to the Empire’s treasury that Emperor Valens declared it illegal to renounce one’s freedom to enter into slavery.[15]