Most polls have Congress' approval rating hovering below 25% and its disapproval rating somewhere around 70%. I believe those marks are representative of two general sentiments: first, of those who pay attention and really don't like the job Congress is doing, and second, of those who don't have a clue and chime in against Congress because it seems to be the thing to do. 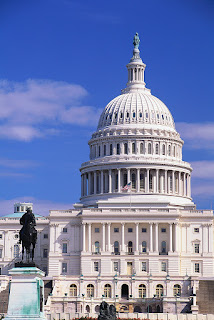 For those of us who are paying attention, we need to continue to vote our representatives out of office if they fail to represent us as they should. We ought to set high expectations and take our representatives to task when they don't meet those expectations.
For those who aren't paying attention and just like to bellow about Congress, I don't know what to say except this is a great time to start paying attention.
In the past two years, we've seen the Executive Branch move on its agenda at a feverish pace with barely a hint of dialogue and debate in the halls of government. Sure, the media has had its day with most of the issues, but we haven't seen the classic struggle of ideas or the clash of philosophies between branches of government that the Founders envisioned when they structured our system of separation of powers.

In my mind, policy change that happens too fast for the Congress to comprehend also happens too fast to be properly assimilated into the culture of the nation. When the Executive moves too fast and fails to collaborate with the Congress, our representatives have no choice but to either rubber stamp "yes," or to pound the table with a persistent "no." Even a speedy compromise discredits the Congress because it lacks the struggle of ideologies and values that makes representative republics work. I much prefer gridlock and inaction over rule by decree, and the last midterm election indicates most Americans agree.

In the last election, people essentially became disgruntled with the "Party of Yes," while the Executive bemoaned the "Party of No." I think most of us want both to be parties of participation and engagement within limits of the Constitution whether they agree with each other or not. When our elected representatives become irrelevant in deference to the Executive, the people become irrelevant. We aren't going to be satisfied with that.
Posted by Rob Doss at 7:00 PM
Email ThisBlogThis!Share to TwitterShare to FacebookShare to Pinterest