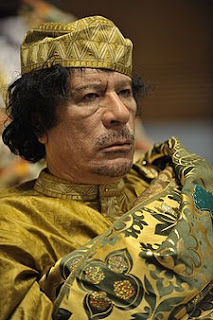 Muammar Qaddafi is a terrorist and he has been one from the day his regime began 40 years ago. He had his hands all over the Lockerbie Pam Am Flight 103 bombing in 1988, and we should have taken him out as soon as it occurred to us that he had a role in it.
When Qaddafi started clamping down on insurrectionists in his country, we attempted to strong-arm him into stepping aside by suggesting we might re-open the Lockerbie investigation and bring charges of crimes against humanity against him. The idea was that we had the goods on Qaddafi and if he didn't back away from defending his regime against the rebels, we would go after him in international court. That not only made us look weak, it showed us to be hypocrites in our outrage over the atrocity on Pan Am 103. How in the world do we withhold our vengeance over the murders of Americans over Lockerbie until - and only until - Qaddafi compounds the crime by killing his own people? That made us look so obviously unprincipled. I don't get it.
If we were going to re-open the Lockerbie investigation, we should have done it LONG before this latest unrest in Libya. Qaddafi read our weakness correctly. He didn't buy the not-so-veiled threat, and he didn't cave in. In fact, he ramped up his operations against his opponents until they were nearly on the ropes.
We continue to say he MUST step aside, but he hasn't. We put strong words out there, but everyone knows we're not going to commit the resources to seeing it through. Finally, when Qaddafi put aircraft in the air against his opponents, the Europeans took the initiative to limit his ability to do that. That's where the no-fly zone came from.
So finally, the President went to the UN to get a resolution for military action, but didn't go to our own Congress. We feel better about bombing Libya because the Arab League called for action, but we didn't check to see what our own Congress thought about it. To be clear, I think the War Powers Act might not survive a Constitutional challenge and I'd support a President testing those waters sometime. However, I will NEVER support the idea of a President consulting with everyone BUT our Congress. There's something wrong with that. Why is he playing the populist with the Europeans and the Arab League, but can't bring himself to take the issue to the people's House in his own country?
So, before the first Tomahawk missile took flight, Qaddafi took cover. He'll stay under cover until the bombings stop. In the meantime, his forces will continue to fight the rebels and he'll survive unless we get lucky and happen to drop a bomb in his pocket. If he lays low, he'll probably outlive our interest in the bombing campaign.
The reason we found Saddam Hussein in his hidie hole was because we had people on the ground blanketing the area. Still, they were lucky to find him. The reason we haven't found Osama bin Laden is because it doesn't matter how many people we put on the ground, there are endless places for him to hide. The reason Qaddafi will probably survive is that we won't go in after him. I don't want to put troops on the ground in Libya, but I think I'd like Qaddafi to wonder if we might. Why do we feel so compelled to tell him how far we're willing to go?
If we want to go after someone, I would rather we just did it rather than think up a reason to do it that we might never be willing to use again in a similar scenario. We have plenty of reason to go after him without it. If the reason we're bombing Libya is that Qaddafi is taking brutal military action against Libyan citizens, would we take the same action against Iran, the Sudan, Somalia, China, or North Korea?
I also think we need ask ourselves how far we would be willing to go in our own country if we were besieged by a highly effective, well-armed and organized insurrection here. Wouldn't we put our jets in the air and bomb our domestic enemies if that's what it took? I think - and hope - we would. Every federal political and military official in our country has sworn an oath "to support and defend the Constitution of the United States against all enemies, foreign and domestic." What do we think that really means? Qaddafi's war with a mortal enemy is not the reason I would have used to go after him. We should remember it's been only 140 years since the Battle of Gettysburg in the Pennsylvania countryside.
We are now participating in a massive bombing campaign, but we say we're not doing it because we want regime change. Ironically, we're bombing him so he'll stop bombing his enemies. That logic doesn't sound entirely congruent. We want regime change, but we say we're not going to try to get regime change by bombing him. What?! That doesn't sound very congruent either. We can't seem to consistently define our principles, mission, or objectives.

Again, I don't have a problem with going after Qaddafi, but I don't agree with how and why we say we're doing it.
Posted by Rob Doss at 9:00 PM
Email ThisBlogThis!Share to TwitterShare to FacebookShare to Pinterest