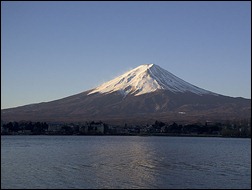 I was talking with one of my sons today and we ended up discussing things you do that don’t seem like much when you do them, but they’re things you’re glad you did later in life. It would be nice if you could see them coming.

As we were talking, I remembered the time I climbed Mount Fuji in Japan with a group of other Marines. We were deployed there from Okinawa and had been operating at the base of the mountain. It was July 4, 1976 and we thought it would be cool to climb it to celebrate the day.

Mount Fuji isn’t a difficult mountain to climb, there’s just a lot of it: a little more than 12,000 feet of it. A lot of Japanese successfully make a pilgrimage of the climb every year. You can climb it in about eight hours if you follow a trail. It’s certainly no Denali. 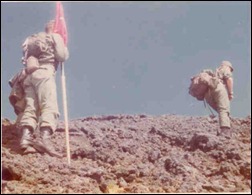 We didn’t want to follow a trail, so we just started from our camp and walked straight up. We started early in the morning and climbed up the cinders all day long. As the end of the day approached, we ran into some weather; it was mostly hail, rain, and wind and it pounded down into our faces as we looked up to climb.

We didn’t quite have a plan for that. About half of our group decided to head back down the mountain, but the rest of us continued on. Not long after we split up, we came across an abandoned building that appeared to be intended as a shelter. It had three walls and, of course, the one that was missing was the one the weather was coming through. 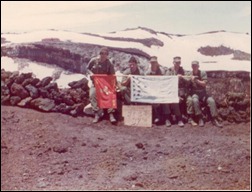 There was an elevated platform inside that seemed to have been designed for sleeping on so we huddled up on that.. We didn’t have blankets so we slept in the cold and wind. It was just cold and windy enough to make sleeping difficult, but it was better than being outside.

We woke up early the next morning and continued the climb as the cinders turned to a little bit of snow resting on top of the cinders. We reached the summit – the crater – at about mid-morning. Looking back down on Japan on that clear day was quite a sight. We walked around and took some photos before heading back down. The trip down was much faster. 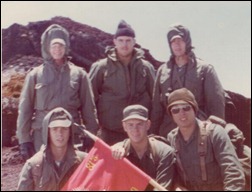 Like I said, the climb wasn’t a major feat, but it was one of those things you don’t get many chances to do. I’m glad we did it. More importantly, I’m glad we didn’t turn around and head back down the mountain when we ran into the bad weather. If we had, that might have been the last time I ever talked about Mount Fuji. It doesn’t seem likely I would have been fond of remembering the time I climbed half a mountain and gave up on the other half.

I suppose avoiding regrets like that has been a big motivator for me in negotiating the challenges and obstacles I’ve encountered over the years.  I think I’ve recognized for a long time that failure sometimes comes with taking risks, so I’ve not spent as much time worrying about or fearing failure as I’ve thought of ways to overcome those challenges and obstacles. I think I’ve been more afraid of quitting or giving up, and what it might turn me into if I headed down that road.

There’s a lot to be said for climbing the other half of the mountain. We do it – or face the decision to do it – all the time. Oftentimes, the consequences that lay beyond the decision not to press on are more lasting than the effects of having tried and failed.

Posted by Rob Doss at 10:34 PM
Email ThisBlogThis!Share to TwitterShare to FacebookShare to Pinterest