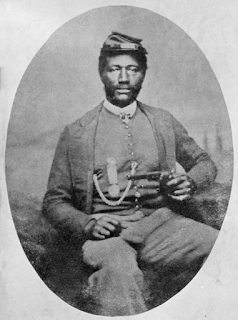 James Henry Harris was born near Creedmoor in Granville County, North Carolina in 1832. He apprenticed as a carpenter as a young man before starting his own business in Raleigh. When laws in North Carolina regarding free people of color became more aggressive in the 1840s, he moved to Ohio[1] where he attended school for two years. Within a decade, he traveled to and taught in Liberia and Sierra Leone where over the previous twenty years, thousands of freed slaves from the United States had resettled.

Harris then moved to Terre Haute, Indiana where, in 1863, he was asked by Indiana Governor Levi Morton to help raise a regiment of U. S. Colored Troops for service in the Civil War.  After the war, he returned to North Carolina where he became a teacher for the New England Freedmen's Aid Society.[2]

Harris soon saw a need to ensure that freedom for blacks included legal and political equality, so he entered politics. In 1865, he was elected to the North Carolina Freedmen's Convention where he advocated moderation and reconciliation with whites and education for blacks. That same year, he became vice president of the National Equal Rights Convention. By the time he became president of the Freedman's Convention the following year, he had become increasingly more forceful in his insistence on equal rights for blacks.[3]

In 1870, while he was a member of the North Carolina legislature, Harris joined with 11 other legislators led by Senator John Pool and met with Governor William W. Holden to devise a plan to suppress the Ku Klux Klan which had been on a terror campaign to keep recently freed slaves from exercising their right to vote by intimidating them and white Republican officials. They decided to form a militia to stop the Klan; that move resulted in the Holden-Kirk War. After several bloody clashes with the Klan, Governor Holden disbanded the militia. Later that year, however, the Democrats gained the majority in the North Carolina legislature and impeached Governor Holden on a straight party-line vote. (140 years later, in 2011, the North Carolina Senate voted unanimously to pardon Governor Holden.)[5]

In the 1880s Harris edited and published the North Carolina Republican, whose slogan was “Firm in the Right,”[6] and whose work was focused "in behalf of the Republican party and the advancement of the negro.”[7]

During his career, Harris was an advocate for education for blacks, prison reform, aid to laborers, protection for women and debtors, and care for orphans. He also helped create and became one of the first trustees of the Colored Institution for the Deaf, Dumb, and Blind in Raleigh. Since even before he began his political career, Harris believed that white and black interests were interwoven, but along the way he maintained his insistence that blacks fight to keep their political rights and to gain equality before the law.”[8]

The end of Reconstruction brought about a persistent erosion of the progress that had been made toward equality among the races after the Civil War. Within two decades, political control had shifted and Jim Crow laws gave legal sanction to segregation and discrimination in the South. Finally, 1901 saw the return of Democratic control in the North Carolina legislature and an end to representation by black North Carolinians in the United States Congress, which had seen 22 black men among its membership over the previous 30 years. It would be another 28 years before another African-American was elected to the U. S. Congress from the state of North Carolina.[9]
James H. Harris' work is largely unknown today and his legacy is elusive, but the contributions that he and many others made to the advancement of African-American interests before the Civil War and during Reconstruction were noteworthy and courageous. Although, many of their initiatives could not withstand the Jim Crow era, their legacy is that although it is easier to throw up one’s hands on racial tension, bias, and bigotry today as if it has never been worse and there is no hope of improvement, the fact is that energetic and courageous Americans can make a real difference with real action, if they're willing. "Real action" includes not turning a deaf and indifferent ear to discrimination in our communities and ensuring that our elected officials back up their campaign rhetoric with tangible action. In order to do that, we have to pay attention and rely on facts and substance rather than fall for the partisanship that favors politicians, not the people and principles they're supposed to represent.
1 Ijames, Earl “Constitutional Convention, 1868: ‘Black Caucus’.” NCPedia. Reprinted from the Tar Heel Junior Historian Fall 2008. https://www.ncpedia.org/history/cw-1900/black-caucus
2 Alexander, Roberta Sue “Harris, James Henry.” NCPedia. 1988. https://www.ncpedia.org/biography/harris-james-henry
3 Ibid.
4 Ibid.
5 Barnett, Ned “N.C. state senate pardons governor who stood up to Klan.” Reuters. April 12, 2011. https://www.reuters.com/article/us-northcarolina-pardon/n-c-state-senate-pardons-governor-who-stood-up-to-klan-idUSTRE73B80V20110412?feedType=RSS&feedName=domesticNews
6 Ijames, “Constitutional Convention, 1868: ‘Black Caucus’.”
7 Alexander, Roberta Sue “Harris, James Henry.”
8 Ibid.
9 “Representative George White of North Carolina.” History, Art, and Archives, United States House of Representatives. http://history.house.gov/HistoricalHighlight/Detail/35244?ret=True

Posted by Rob Doss at 12:00 AM
Email ThisBlogThis!Share to TwitterShare to FacebookShare to Pinterest