My Money's on the Phillie

My nephew, David, was drafted the other day by the professional

baseball team, the Philadelphia Phillies. A Phillies representative will meet him at his parents' home here on Saturday where he will sign a contract to play baseball with the team. He will board a plane for Philadelphia on Monday.

It seems like a whirlwind tour for him, but it's one that he's been working for for some 17 years. For him, it's been more than a dream; it's been an aspiration wrapped in steady hard work. I coached him for the first time when he was 6 years old playing tee ball. Even at that age, David was head and shoulders better than everyone else. Several "experts" at the ball park back then used to go on and on about how that boy was going to be a pro baseball player some day. I guess they were right.

One of the greatest attributes David has shown all throughout his playing career so far is what I think has always set him apart from the others: he is simply prepared to out-work and out-think everyone else on the field. He's always played without pretention; he has never been 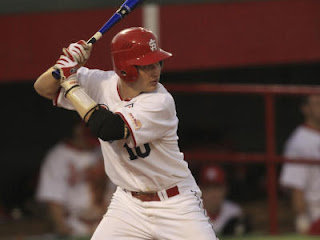 a flashy player either. He's just been making the plays and he has set the pace for the teams he has played on.

That humility has surfaced again. At a moment when all of the wheeler-dealer draftees are trying to hardball these pro teams for more money, David understands his bargaining position and power. Therefore, he's decided to do what has worked for him all of his life: take care of business on the baseball field. His mindset right now is refreshing - all he wants to do is get started with the Phillies so he can do what he's there for. He believes that if he does his job the way it's supposed to be done, the team can't afford to do anything but give him more and more opportunities. Ultimately, he believes it'll pay off. I believe he's right about that.

I believe the work will pay off for him just as it has his entire life so far. I'm pulling for him. My money's on this Phillie. 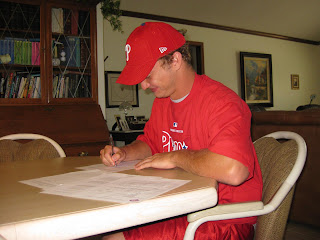 UPDATE: David signed a contract with the Philadelphia Phillies on Saturday, June 13, 2009. Congrats and good luck, David!
Posted by Rob Doss at 12:24 AM
Email ThisBlogThis!Share to TwitterShare to FacebookShare to Pinterest