I look at the language of our diplomatic initiatives today and wonder where these words have disappeared to: "We hold these Truths to be self-evident, that all Men are created equal, that they are endowed by their Creator with certain unalienable Rights, that among these are Life, Liberty, and the pursuit of Happiness."

These words aren't merely archaic expressions by some idealists who founded our nation. These are words that have formed the rationale for the expenditure of American lives and wealth at home and abroad for 200 years. They have literally 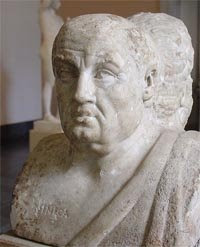 reflected the visceral character of America for two centuries and they have inspired uprisings in the name of liberty and toppled harsh regimes throughout the world.

The thoughts behind the words have been practically timeless in mankind's political discourse. They have centuries of history in the philosophy of the nature of man behind them.

The ancient Greek Stoics believed that the human nature yearns for freedom in spite of a person's physical environment. They believed that whatever the physical condition of man was, the intrinsic nature of man can not be constrained. The Roman Stoic philosopher Seneca wrote, "the body indeed is subjected and in the power of a master, but the mind is independent, and indeed is so free and wild, 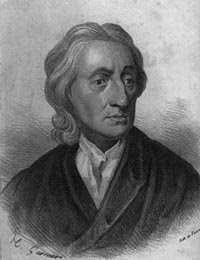 that it cannot be restrained even by this prison of the body, wherein it is confined."

Centuries have passed since the days of classical political thought, but the idea of the natural rights of man has persisted: the Magna Carta, the English Bill of Rights (1689), and many other documents are testaments to the durability of the idea that man has natural rights that should find expression in public law. English philosopher John Locke, who had a profound influence on the Founders, wrote that man's natural rights - life, liberty, and property - were inherent in people and could not be compromised by man's law.

So, when Thomas Jefferson laid pen to paper in our Declaration of Independence, he took the first 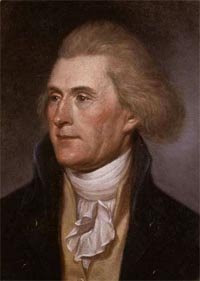 formal steps in establishing our acceptance of these rights as a nation - life, liberty, and the pursuit of happiness - as not only "natural" rights, but also as inherent rights that form a legitimate basis for action to claim them, even if those actions included revolution.

These are words that have inspired others since our independence. The motto "liberte, egalite, fraternite" (liberty, equality, fraternity) of the French Revolution and the Canadian motto "peace, order, and good government" are examples. These words can be found in Chapter III, Article 13 of the Constitution of Japan, and (believe it or not) Ho Chi Minh wrote these words into the Democratic Republic of Vietnam's declaration of independence after Japan's occupation ended there in 1945. 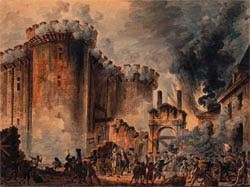 So, these words are more than a little bit of ink smeared on parchment. They have been the rationale for revolutions and the basis for our support of people seeking to exercise their natural rights throughout the world...

...except in Iran today.

When a friend of mine asked me the other day what I thought would happen in Iran in the aftermath of presidential elections there, I told her that I thought it could go one of two ways. On one hand, I thought the 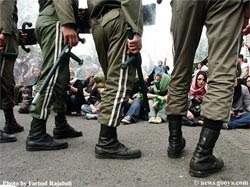 Iranian government's treatment of election protesters in the streets of Iran might be met by broad international condemnation and that America's legacy of standing loudly and decisively for the inalienable rights of mankind would find expression in a plainly-spoken diplomatic response by the United States. I thought we could give the kind of response that would sound familiar to our Founders and would give confidence and voice to the democratic movement in that country.

But I also thought that regardless of what we said, the Iranian government might not be impressed by the world's reaction and would continue its crackdown because, after all, it is a totalitarian regime that merely pretends to conduct democratic elections. In Iran, there is a difference between appearance and reality.

Either way, I thought it was important that the Iranian government realize that we are neither fooled nor impressed by their charade. We might not be able or willing to prevent the abuse, but we should be clear that we are not indifferent to it either.

Meanwhile, the United States has withdrawn its invitation to Iranian diplomats to attend Fourth of July celebrations at U. S. Embassies in less than two weeks (although the Iranians hadn't RSVP'd anyway). The offer in the first place was an outrageous affront to our founding principles and values, particularly in light of the face that recent events in Iran clearly demonstrate that snuggling up to the regime is not the answer.

So, the paramount effort right now is not to encourage and support the spontaneous democratization of totalitarian countries. It is now more important to normalize relations with nations that have responded with hostility to what they allege is past American hegemony in the region. Our new policy is to accept the characterization of our advocacy of the rights of man as "hegemony" and to essentially attempt to neutralize our enemies' hostility with confessions of guilt and apologies.

Our founding ideals are slipping. Our neutrality on a matter that has a uniquely American stamp on it is painfully significant to hopeful democrats around the world today. While the Iranian government continues its brutal crackdown on protesters in Iran, we are disgracefully fixated on other news today, and we will continue to be distracted over these next few critical days as the Iranian democratic movement stumbles and breaks down.

How weak and irregular is the pulse of these essential principles in us today...
Posted by Rob Doss at 9:00 AM
Email ThisBlogThis!Share to TwitterShare to FacebookShare to Pinterest