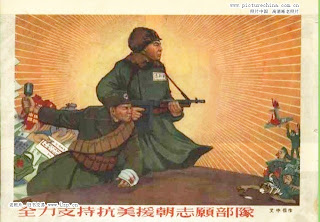 The largest and bloodiest battle in 1952 during the Korean War was the Battle of Triangle Hill. Chinese Communist forces in defensive positions on Triangle Hill and nearby Sniper Ridge fought back American and South Korean forces for 42 days as they attempted to seize the tactical advantage on the high ground and drive the Chinese army back.

While the Chinese suffered some 11,500 killed and wounded during the battle, compared to 1,500 U.S. and 4,500 South Korean casualties, the Chinese held the ground and the Americans and South Koreans ultimately retired from the battle without securing a victory. For the American and South Korean forces, the battle at the center of Operation Showdown was a failure in spite of the losses they inflicted on the Chinese because they failed to take the ground. The battle became a symbol of Chinese perseverance against the American imperialists to the Chinese faithful.
Although the Battle of Triangle Hill isn't exactly a household name among Americans today and wasn't even well known during the war, it's a much different story for the Chinese, even today. The battle, known in China as the Battle on Shangganling Mountain, became the subject of a number of major motion pictures in China and was memorialized in the theme song from one of those movies, "Battle on Shangganling Mountain." The song, originally titled "A Big River" came to be called "My Motherland," clearly in recognition of its rousing patriotic - and distinctly anti-American - lyrics and context in the movie.
The Chinese Communist Party used the movie and song as a rallying cry against America for several decades; while the movie has apparently faded in the Chinese memory, the song is still quite familiar throughout the country.
In advance of Chinese Chairman Hu Jintao's visit to Washington last week, Americans were witness to some jostling between the Americans and the Chinese. The Americans pressed for a level trading field, asking the Chinese to protect American trademarks and patents.  The Chinese trotted out their new stealth fighter that some experts believe was built on technology the Chinese lifted from an American F-117 stealth fighter that was shot down over Serbia in 1999 in order to flex a little muscle. The Chinese own a significant share of American debt and the U. S. government asked the Chinese government to stop overvaluing its currency which, in essence, drives up our debt and the cost of Chinese goods dramatically while driving down the value of American exports in China. China's response was that the world needs to go away from the U. S. dollar as a monetary basis and begin using the Chinese yuan instead.
So, that was the setting when Chairman Hu arrived in the United States and was treated to a rare and elaborate state dinner in his honor at the White House. To lend texture to the evening, the White House invited Chinese pianist Lang Lang to perform at the White House. Lang Lang isn't an American of Chinese descent, he's a Chinese citizen.
Lang Lang took to the keyboard at the White House and began his set before breaking into the theme from "Battle on Shangganling Mountain," "My Motherland." While the lyrics weren't sung, Chinese on the other side of the world knew them well: "When friends are here, there is fine wine / But if the jackal comes / What greets it is the hunting rifle." In the song, the "jackal" is the United States.
In 1951, U. S. General Douglas MacArthur quite publicly insisted on advancing the Korean War into China, but General Omar Bradley testified before Congress that the Joint Chiefs of Staff believed such a strategy would commit America to "the wrong war, at the wrong place, at the wrong time, and the wrong enemy." As Lang Lang's performance at the White House generates a buzz in China, more than one Chinese internetnick has written the performance was, "the right place, right time, right song!"
In the eyes of Chinese who watched Lang Lang's performance back in China, it was clearly a propaganda coup and an insult to the United States, even if Americans didn't catch on. After the performance, Lang Lang recorded in his blog, "Playing this song praising China to heads of state from around the world seems to tell them that our China is formidable, that our Chinese people are united; I feel deeply honored and proud."
So far, Americans are taking neither notice nor offense to the performance. Many who have noticed, particularly those in the media, maintain the performance wasn't a problem because the lyrics weren't sung and that as a piano piece, the significance of the words millions of Chinese have found anti-American inspiration in are diffused.
As our country flails in a fatal spiral of self-consciousness about American exceptionalism these days, uncertain of the belief that there is something about the United States that makes it unique and special, the Chinese are buoyed by their own ravenous nationalism.

Does it matter that Lang Lang performed the ballad that so many Chinese citizens know so well on the piano or sang it at the top of his lungs?
Would it matter if a person walked to the microphone at a Martin Luther King event and whistled "Dixie" if he didn't sing the words? Would it matter if a British guest of the Indian government hummed "God Save the Queen" at an independence commemoration? No words spoken, just the melody. Would it be okay if I boasted of the American victory at Iwo Jima in English to a Japanese veteran of that battle if he didn't speak English?
A moderate (and obviously anonymous) Chinese professor confessed some embarrassment over Lang Lang's performance, "Suppose for a moment that Obama was invited to a banquet in China, and he invited an American artist who had performed in China for many years to play an American war song against China, what kind of reaction do you think the Chinese government and people would have? ... I think the American government still doesn't know the background of this song -- if they knew, wouldn't they be offended?"
The professor seems to recognize that the performance wasn't okay. He seems to understand the measure of an offense isn't in the extent to which it is taken, it's in the extent to which it is given. Perhaps he knows that while we Americans remain oblivious to the offense and its implications, it's still there and quite meaningful to others who see our indifference as abject weakness.
The problem as I see it isn't simply that offense was given. The problem is that as Chinese nationalists gloat at our gullibility and the absence of our own nationalism, we are proving them right by our dull noncommittal and lack of savvy about the scene swirling around us. The problem is that as China sings and salutes its durability and courage in the face of its American adversary, we stand by politely and tap our foot to the tune.
The joke's on us. I hope we catch on soon.
Posted by Rob Doss at 9:18 PM
Email ThisBlogThis!Share to TwitterShare to FacebookShare to Pinterest