U. S. Navy Captain Owen Honors, recently skipper of the USS Enterprise, has received some unwanted press over the past few days. Captain Honors is a 1983 graduate of the U. S. Naval Academy, a fighter pilot, and a former instructor at Top Gun, the Navy's Fighter Weapons School. Finally, he achieved the highly coveted command of a United States aircraft carrier. Today, all of it - and more - are gone. 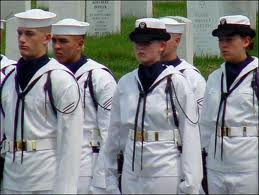 The American people today know that Captain Honors liked to make videos that, depending on your perspective, were either amusing spoofs or they were evidence of a cavalier abuse of power. By all accounts, Captain Honors had a distinguished career, so the question arises: did he deserve to be relieved of his prestigious command and perhaps forced to retire from the Navy?
Opinions run the gamut. On one hand, some say his antics were bigoted and contrary to the values of American society today. On the other hand, some say there's a locker room manner that runs through many combat units not intended for public scrutiny because - quite simply - the public wouldn't understand it. Some say military people like Captain Honors are defending our country and we should cut them some slack; others say service is no excuse for this kind of behavior.
Somewhere in the middle, however, are those of us who think enough of our military people that we believe they deserve better leadership and if they are themselves leaders, that they should be better leaders than Captain Honors' example illustrated. Many of us understand that there is in fact often a locker room aspect in some combat units, but we also know it exists without showing disrespect for one's comrades. We recognize that combat readiness is not improved by the degradation of our military's most valuable asset, the people.
It's a mistake for a leader to think just because his subordinates laugh at his antics, that they necessarily respect him for them. It's healthy for the leader to remember that sometimes people laugh because they're amused at the caricature of the leader, not because they think he's a great guy. That can undermine the entire leadership apparatus.
Leaders are sometimes confused over the nature of referential power too. The leader with referential power tends to derive his power from being well-liked and respected; however, "well-liked and respected" can be opposite sides of the same coin for a leader. Where some leaders try too hard to be well-liked, thinking they will thus be respected as well, they miss the subtle yet important fact that more effective and trusted leaders seek to become respected through their example first and let the likability chips fall where they may. It's through that contagion of example that the respected leader might also be well-liked.
So, when it gets down to it, it's not enough for a leader to be good at what he does and be crafty and clever socially, he also has to be worth following. It's on that basis that trust is developed; when the times get tough, people don't follow leaders they don't trust no matter how much they might like them or might be entertained by them.
Captain Honors seemed not to learn along the way that the schtick that probably made him the life of the party when he was a midshipman and a junior officer does not pass as leadership when in command of young men and women who need to admire and trust their leaders. While there's no point in denying a leader's "B" side - most of us have one - it's important not to let any of our narcissistic tendencies undermine that little bit of mystique that all good leaders must have.
The videotaped toilet humor that showed Captain Honors plucking a candy bar out of the toilet and eating it (as if it was something else) was pretty harmless. Even the video montage of him dropping f-bombs was immature, but not harmful to the crew. Where he crossed the line in my book is seemingly not appreciating the fact that his sexual banter, enactments, and antics amounted to sexual harassment of female members of the crew, even if they took no offense. The sexual context of some of the videos like his "Chicks in the Shower" clip is only part of the problem. The fact that he forced the issue with comments like, "Over the years I've gotten complaints about inappropriate material during these videos, never to me personally but gutlessly through other channels" is bullying at a minimum and puts the "harassment" in sexual harassment. It creates a threatening and hostile environment, and it always harms combat readiness, not because of the sexuality but because of the hostility toward people who are powerless in the face of it. That's where his superiors lost confidence in him as a leader.
So, we return to the original question: should Captain Honors have been relieved of his command with his military career all but over? The answer is, "yes." Ironically, if he's as good an officer as his seniors have believed he was all along, he knows the answer is yes too.
Posted by Rob Doss at 11:20 PM
Email ThisBlogThis!Share to TwitterShare to FacebookShare to Pinterest