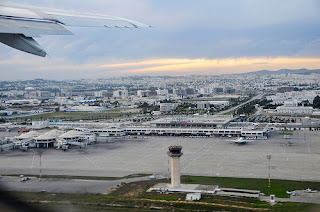 In the history of Tunisia, it's been ruled by all of the major players in the area because of its strategic location in North Africa on the Mediterranean Sea. The Romans, the Carthaginians, the Muslims, and the French all had their turns there. It was a contested area in World War II as well, the site of famous tank battles involving Rommel and Patton. Today, Tunisia is an Arab Islamic nation and an ally of the United States.

With that country in the news a lot here lately, I've been thinking back on when I was there in the late 80s. The United States had good relations with the government (and still does now, I believe) so we were able to train there in the Tunisian countryside west of the capital, Tunis. We had completed a week of training there and the U. S. Ambassador to Tunisia was on our ship for a visit. He needed to get back to Tunis so I was assigned to fly him there the night before we pulled up the anchor to move to another part of the Mediterranean to train. I filed an international round-trip flight plan from the ship to Tunis for two helicopters.
We took off from the ship just before sunset and headed toward Tunis. As we approached the city, we contacted the international airport for permission to land. We advised them we were on an international flight plan and they cleared us into the area. We landed at the airport and let the ambassador out.
As he rode away in a consular vehicle, I called for takeoff clearance. It should have been a routine matter since the return trip was filed on the same plan as the flight into the country, but for some reason, there was suddenly no sign of a flight plan for us. We weren't going to get anywhere arguing with them on the radio so we taxied over to the main terminal so we could file a flight plan back out of the country to our ship. (You would think it would have been easier to get out of the country than it was to get in, but such was the nature of getting things done over there sometimes.)
I asked my wingman to join me and leave his helicopter running with his copilot at the controls. I left mine running in the capable hands of my copilot. We walked into the terminal to find the flight planning office so we could get a plan filed and get on our way.
When we walked into the terminal, people swarmed us. It was a little alarming at first, but they were just curious about us as we stood there in our flight gear trying to figure out where we needed to go. They came up to us - right up to us - and were tugging on our flight gear: our oxygen bottles, our flashlights, everything strapped to our vests, asking if they could have them and asking to see our helmets. We shook them off as politely as we could and made our way to the planning office and filed the flight plan. With a flight plan filed, we were back in our helicopters fairly quickly and were able to take off without further incident.
It's not an exciting story since the episode in the airport wasn't really a big deal, and we made it back to the ship within an hour and a half or so easily enough. I'm telling it here because with the events happening in Tunisia and Egypt right now, I'm reminded of how much different most of the rest of the world is from the United States. Most of those people had probably never seen - or touched - a U. S. Marine before so I suppose we were a bit of a novelty. Still, we take so much for granted.
Things that are spectacular in most of the world are routine in our country, and yet, we still complain and wait for someone to make things better for us. We easily forget what made us great, and I'm sometimes concerned that our failure to realize how America is exceptional is going to cause us to forget what it will take to keep us that way. It is so easy for us to shrug hard times off and say, "American always comes back" without realizing America has never come back without good people making it happen. So, as the people of Tunisia and Egypt seem to be clamoring for freedom from overbearing governments, I hope we take notice of their yearning for freedom and all of the responsibilities and challenges that go with it, and remember how important those things were to us once.
Posted by Rob Doss at 10:25 PM
Email ThisBlogThis!Share to TwitterShare to FacebookShare to Pinterest