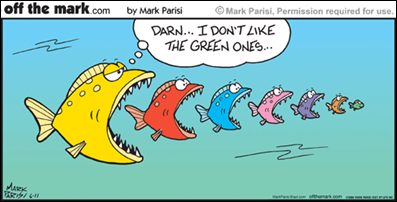 Maybe you saw the news story the other day about the 9-year old 4th grader who was suspended from school for telling a friend that he thought his teacher was cute. The principal decided to impose a suspension on the student for “inappropriate behavior” for making that comment which she said was a form of “sexual harassment.”

The principal obviously lost sight of what sexual harassment really is and why it’s a problem when it occurs. Sexual harassment is intimidation or coercion with sex in some manifestation – physical, verbal, body language – used as the lever. It’s not supposed to be a tag you place on innocent remarks made by people who intend no malice and are in no position to exert their will on others. Contorting a young student’s harmless observation that he thinks his teacher is cute and representing it as “a form of sexual harassment” goes way too far.

I do think I know where that kind of overly strong reaction comes from though. These days, there is so much required of school officials as they’re expected to protect the school environment from all manner of real and perceived hazards, offenses, insults, and more. Everything in a school setting takes on so much more significance than it does just about anywhere else.

What’s more is that the failure of a school teacher, administrator, or other official to act on these kinds of events can cost them their job and expose them to the scorn of everyone who reads about their failure to take action on the front page of the newspaper. Ironically, the public is often the first to be outraged by the kind of overreaction this phenomenon sometimes spawns while it also seemingly lays the groundwork for it in advance by being so quick to call for heads to roll.

So, I understand the principal’s position. As a principal, she had to make difficult and consequential decisions every day, and she had to be alert and prepared to pounce on incidents that cross the line.

However, while I understand her position, I do not agree with her decision. The problem with her choice of discipline for the student was that it was neither just nor proportionate. Instead, it bordered on cowardly.

She seemed to me to be much less interested in administering justice than she was concerned about how the student’s remark and her response to it might be perceived by the public and others who might second-guess her. She seemed less interested in issuing a proportionate response than she was in covering her tail (and that reference to her tail is not intended to be a form of sexual harassment, by the way). She simply didn’t want to be on the wrong side of the decision.

Well, this would normally be a good place to insert a concluding paragraph, but we’re not yet at the end of the story. The rest of the story might help explain the culture that made the principal’s overbearing response such a comfortable and logical one for her.

As poor as the principal’s decision to suspend the student was, and as stubborn and entrenched as she remained after she had a chance to reflect on it, I think the school board’s decision to force her to retire or face termination for suspending the student was equally poor and self-serving. When you get right down to it, they really didn’t let her go because she suspended that student; they let her go because the board was embarrassed by the public reaction to her decision to suspend him.

Just as the principal should have stepped back a bit and made a fair decision about how to handle the student without regard for the political implications, the board should have done the same thing with her. Neither of them did that, and the result is that neither of them rendered a just decision. Neither decision was inspired by a sense of justice; both were motivated by a desire to placate real or potential outrage, even if the outrage was itself disproportionate. If the standard was justice – and it was – then both parties failed. The principal failed the student, and the school board failed the principal.

As for the school board, it should have called the principal in for a private session away from all of the turmoil and emotion and encouraged her to reconsider her decision to suspend the student. Hopefully, she would have gotten the message and made a course correction (and an apology). If she didn’t get the message, I would have told her to reverse her decision. If she didn’t, then I would have fired her for insubordination and let the next principal correct the decision.

So, now the student is back in school and he’s still stuck in the classroom with that cute teacher, the principal is out of a job, and the board has flexed its muscles. The news will eventually die down once the buzz over this blog posting finally subsides.(!) And then what?

In the end, no one will have won and no real good will have come of this. That hollow, dissatisfied feeling all of them will experience will be the residue of cowardice and injustice, and they will have earned it.

Posted by Rob Doss at 11:00 PM
Email ThisBlogThis!Share to TwitterShare to FacebookShare to Pinterest