The Lesson of Bambi 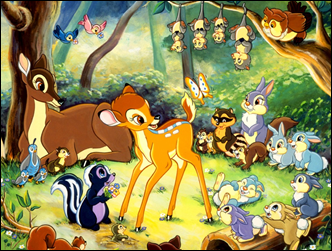 It’s funny what you think of when you’ve been sitting in a tree all day waiting for a deer to come along. Yesterday was one of those days. With a big moon in the sky at night, there weren’t a lot of reasons for deer to wander around during the day time. On top of that, the wind was swirling and gusty. Being a nervously paranoid animal in the first place, deer aren’t exactly comforted by all of the scents and sounds in the woods on those kinds of days, so they tend to sit tight until the sun goes down. But there I sat anyway just in case I was wrong.

I have seen deer just about every time I’ve been out this year so far, but in most cases it’s been a doe with a young fawn. The late season fawns have lost their spots, but they’re still wearing kind of a rusty brown coat. In a few weeks, they’ll start picking up some black and darker brown that will darken their coats. I’ve always had this thing about shooting does with young fawns. In passing on the shot, I have just had this sense that I’d really be killing two deer because the predators would get to the young deer without mama there to take care of it.

That happened again Saturday. Mother and fawn came out in front of me and weren’t 20 yards in front of me at one point, totally oblivious of the immensity of my humanitarianism.

Well, as I sat there in that tree yesterday being buffeted around by the wind, I started thinking back to all of those deer I’ve been passing on, probably five or six this season already. On one hand, I thought I had done the right thing. On the other hand, I thought I’m not giving a weaned deer enough credit; many say a weaned deer can make it just fine on its own without its mother.

At one point as I sat there in that tree alone arguing with myself over whether I should be shooting those does or not, my mind went to the Disney classic movie “Bambi.”

As I remember the movie, it starts off 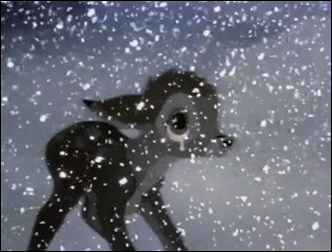 with Bambi’s mother being shot by an evil hunter while Bambi was still a spotted fawn. Bad day for Bambi, but it wasn’t the end for him, was it? No, Bambi wasn’t immediately set upon by predators and disease. Instead, he was befriended by rabbits, a skunk, an owl, and other forest critters who really stepped up to help Bambi cope. They became Bambi’s friends. As the Disney site boasts, “with the help of pals Thumper and Flower, Bambi learns about the wonder of nature and the power of friendship and family.” Those were some pretty darned good friends poor little Bambi had.

Ultimately, Bambi grew up, became a really nice buck, and sprouted a proud rack of antlers that would have made a nice fixture over someone’s fireplace.

As I sat there in the tree yesterday, the real lesson of Bambi settled in on me. It wasn’t that man is evil and likes to hurt cuddly animals like deer. The lesson was that even though man can seem evil sometimes, even when he’s just putting food on the table for his family, things in the forest seem to turn out okay anyway. Sure, Bambi lost his mom early in the movie, but he gained his independence, some interesting friends, and a really awesome set of antlers.

The next time I see a doe with a young fawn, though, I’ll still pass even if it means the little guy won’t get to meet cool, talking forest friends like Bambi did. It’s just hard to put much stock in cartoons, not even the classics.

Posted by Rob Doss at 9:19 PM
Email ThisBlogThis!Share to TwitterShare to FacebookShare to Pinterest