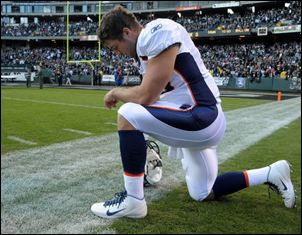 Many don’t know that in addition to being a premium football player in high school, Tim Tebow was also a very good baseball player, named to the all-state baseball team as an outfielder after his senior year of high school. I remember watching him play for Ponte Vedra Nease High School the year my son and nephew played for the Florida high school baseball championship. Tebow’s team played in the semi-finals and lost to the team that our team ultimately defeated in the championship game. Even as a senior on the baseball team, Tebow was someone most Florida high school sports fans were already familiar with.

He had already drawn a legion of ardent supporters, but as his college career took shape, he also found a smattering of detractors. 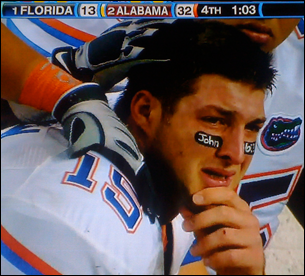 I have to say I had mixed feelings about him when he played in college. I appreciated his competitiveness and his burning desire to win, and I admired his adherence to his values. What didn’t always sit well with me, however, was what I took for a penchant for over-playing the part. He seemed to wear too much on his sleeve, and I guess I’ve tended to take that sort of thing as somewhat over-cooked and contrived. Today, I don’t know if that’s accurate or fair to him. It might be that that’s just how he knows to express himself when it comes to the really important things in his life. I think I have to give him the benefit of the doubt on that. People need to have a sense of commitment to the important things and be willing to be thoroughly attached to them. That’s hard to fault him for.

As he began the transition to a professional football career, he attracted a good many doubters, probably for the first time in his life. When this football season began, I gave him only a slightly better than zero chance of starting for the Broncos this year. I’m not a pro scout, but I didn’t know how to disagree with all of those experts who had so much to say about what was wrong with his arm motion, delivery, and so on. At one point, he was the 3rd string quarterback, just a hair away from perhaps being cut from the team.

Now that he’s starting every game for the Broncos and the team’s original #1 quarterback has been cut, we’re seeing some things you just don’t find on the stat sheet anywhere other than in the “W” column. There’s a lot to like about a pure competitor like him.

Here’s a guy who won the Heisman Trophy in college who doesn’t exactly dazzle the crowd with gaudy stats now, but he does seem to win. And he’s a leader at a time and in an arena where we just don’t see enough of that.

Instead, we see so many celebrities who don’t know how to behave with their wealth and notoriety that we really don’t know what to make of a guy like Tebow. We can’t make sense of it so we criticize him, thinking there’s something wrong with him.

Shouldn’t he be spewing foul language, partying into the night, and getting into trouble? Tebow apparently didn’t get the memo. He kneels on the ground to pray during make-or-break field goal attempts, literally in front of God and everyone. He speaks like a guy who seems wise and mature in many ways while still coming across as naïve and untarnished by cynicism. He has taken immense heat in the media for being such an overt Christian, yet he doesn’t waver. There’s much more that is unconventional about this athlete than his arm motion and delivery, that’s for sure.

For what Tebow lacks in textbook quarterback skills, he more than makes up for in genuine leadership qualities and character. While the experts continue to be befuddled by his success, I have to say I’m pulling for him because he really does seem to be a good guy, he stands by his convictions and core beliefs in the face of criticism, and he knows how to take guys who are often mostly famous for being too much into themselves and help turn them into winners.

There might be plenty wrong with Tebow as a technical quarterback, but there is also plenty right with him as a man and as a leader. It’s the latter that will have the greatest influence on those around him and if that’s how his professional football career is remembered, that isn’t all bad either.

Posted by Rob Doss at 9:09 PM
Email ThisBlogThis!Share to TwitterShare to FacebookShare to Pinterest