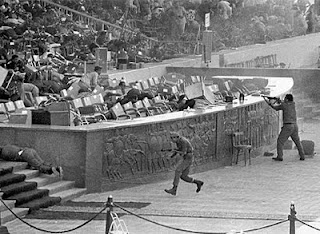 The Muslim Brotherhood has been around a LOT longer than Al Qaeda has. The Muslim Brotherhood boasts a history, staying power, and a reach into regional politics that is easily the toast of terrorist tea parties.
Back in September 2006, I wrote a paper about a then-obscure world vision called the "worldwide caliphate." Well, it was obscure in the United States, but it wasn't so obscure in the Middle East.
After the Prophet Muhammad's death in 632 AD, the new Islamic faithful were led by Abu Bakr. He was the first "Rightly Guided Caliph," or ruler of the Islamic kingdom, the caliphate. 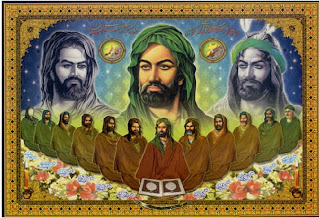 Not everyone believed Abu Bakr was the rightful first leader of Islam; they believed the first caliph was actually Ali ibn Abi Talib (Ali), the Prophet Muhammad's cousin and son-in-law. This controversy didn't arise right away, though, Ali didn't assert his place until Uthman ibn Affan - the third Rightly Guided Caliph - rose to prominence and attempted to get control of the various versions of the Koran that were already being circulated in the mere eighteen years since Muhammad's death.
Ali asserted that Uthman had no right to the leadership of Islam, while Uthman's supporters maintained he was one of the very few people who stood in Muhammad's tight inner circle at his death. Ali, on the other hand, had the distinction of being Muhammad's blood relative and also the husband of Muhammad's daughter. Tough call.
Ali claimed that Uthman had strayed from Islam, and after Uthman was assassinated by rebels, Ali became the fourth Rightly Guided Caliph. Or maybe he was the first Rightly Guided Caliph, depending on who you ask.
It turns out this rift between Ali and Uthman that began in the shadow of Uthman's effort to compile the Koran and the disagreement over the right to leadership of Islam has had quite a lasting and significant impact on Islam.
It was this succession argument and the related dispute over the language of the Koran and the path Islam was following that gave rise to the two Islamic sects we know today: the Shiites and the Sunnis. The Shiites supported Ali and asserted (and still assert) that he was actually the first Rightly Guided Caliph and the Sunnis supported Uthman and maintained he was the rightful third successor to the Prophet Muhammad.
The Shiites believe Ali was the first of twelve important Imams. The Twelfth Imam is - after Ali - probably the most important of them all. The Twelfth Imam was Muhammad al Mahdi ("the Mahdi"), also known as the "Hidden Imam." He's known as the Hidden Imam because he's believed by many to have been hidden from the faithful since he suddenly vanished at the age of 5 in the 9th century. Believers maintain he will lead the world to justice and absolute peace.

The splintering of Islam into Shiite and Sunni sects is the political aspect of the internal conflict within Islam that began almost immediately after Muhammad's death. Of as much significance is the ongoing and seemingly endless argument (this is well beyond a mere debate) over which group adheres perfectly to the original Koran which Muslims say was channeled directly to Muhammad by the Archangel Gabriel. This isn't a contest over which group is more right; it's an argument as fierce as any over which group is right and which group is wrong. The consequences are grave because one group believes the other has departed from the true path of Islam.

Just as Ali's allies arose to question the Koranic interpretations and spiritual pathway of Caliph Uthman, another man made the same claim about others in Egypt 1,300 years later. More on that tomorrow.
Posted by Rob Doss at 5:33 PM
Email ThisBlogThis!Share to TwitterShare to FacebookShare to Pinterest