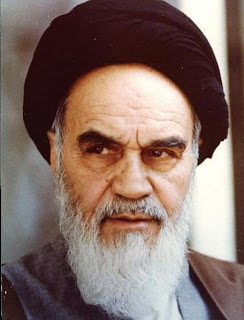 As I wrote yesterday, the Shiites believe Ali was the first of twelve important Imams. The Twelfth Imam is - after Ali - probably the most important of them all. The Twelfth Imam was Muhammad al Mahdi ("the Mahdi"), also known as the "Hidden Imam." He's known as the Hidden Imam because he's believed by many to have been hidden from the faithful - roaming caves - since he suddenly vanished at the age of 5 in the 9th century. Believers live for the day he reappears so he can lead the world to justice and absolute peace.
"Twelvers," who make up about 80% of Shiites, believe the Mahdi will return to rule over - wait for it - a worldwide caliphate, a worldwide Islamic kingdom. Twelver Shiism is the official state government in Iran, and has been since the Ayatollah Khomeini came to power in Iran in 1979 in the aftermath of a massive "student" uprising that overthrew the autocratic Shah of Iran.
Twelver language sounds ambiguous and harmless enough... unless you know what you're listening to. Just before I wrote that paper in 2006, Iranian President Mahmoud Ahmedinejad gave a speech to the United Nations General Assembly. He told the General Assembly, "I emphatically declare that today's world, more than ever before, longs for just and righteous people with love for all humanity; and above all longs for the perfect righteous human being and the real savior who has been promised to all peoples and who will establish justice, peace, and brotherhood on the planet."
He gave a similar speech the following year and both were received by many in America as a message of peace and an indication that maybe Ahmedinejad was someone we could reason with if we only approached him on an equal basis. Anyone who knows about Twelver Shiism, however, reads that message of "peace" entirely differently. It's a message of conquest. It's the language of the campaign to establish a Worldwide Caliphate.
So, what does all of this have to do with the Muslim Brotherhood in Egypt?
By 1924, there were fourteen or more versions of the Koran until a group in Egypt, "an Egyptian Royal Committee of experts," assembled and issued a unified - and final - edition of the Koran. The idea was to bring some new discipline and unity to Islam, but as was the case when Caliph Uthman attempted the same feat in the early days of Islam, dissent arose among those who believed that work betrayed the authentic nature of Islam. 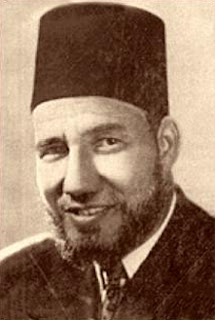 Out of that discord arose the voice of an Egyptian named Hassan al Banna who believed Islam had lost its dominance because Muslims and Muslim nations had been corrupted by the West. At the same time, the President of Turkey abolished the Ottoman Caliphate; the Islamic Caliphate seemed to be receding. However, Banna called for a return to the "original" Islam and believed the Koran should be applied to all parts of life and government (Sharia law).
Banna founded the Muslim Brotherhood in 1928 after the failure to revive the caliphate through the Khilafat Movement in 1924. He established the Brotherhood under the words, "God is our objective, the Koran is our constitution, the Prophet is our leader, struggle is our way, and death for the sake of God is the highest of our aspirations." The charter since that early day has maintained that is seeks to install a just Islamic empire and a Worldwide Caliphate through stages designed to Islamize targeted nations by whatever means possible.

Through stages. We Americans are susceptible to incrementalism because we have a notoriously short political attention span. While many of us are alert to Muslim revolutions that indicate the emergence of the caliphate, the Muslim Brotherhood and other organizations are taking an entirely different approach:  an incremental approach through stages. While we're watching the front door, they're patiently crawling through the bathroom window.
So, how has the Muslim Brotherhood done since 1928? By 1936, it had 800 members. Twelve years later in 1948, it had half a million members, and one of those members assassinated the Prime Minister of Egypt. Banna was killed by Egyptian government agents the following year. Undaunted, the Muslim Brotherhood tried to assassinate Egyptian leader Gamal Abdel Nasser in 1954. When Nasser's successor, Anwar Sadat, signed a peace agreement in 1979 (and won the Nobel Peace Prize for it), four members of the Muslim Brotherhood assassinated him in 1981.


So, in the modern era - since 1922 - Egypt has had five rulers: Fuad I, Farouk, Nasser, Sadat, and Mubarak. When King Fuad died of natural causes in 1936, he was replaced by his son King Farouk. After Farouk's defeat in the Arab-Israeli War in 1948, he was forced from the throne in 1952 by Gamal Abdal Nasser who established the Egyptian Republic. The Muslim Brotherhood attempted to assassinate him in 1954 (they did manage to assassinate the Prime Minister). His defeat by the Israelis during the Six Day War led him to an alliance with the Soviet Union (which included a significant Soviet military build-up there).


Sayyid Qutb was an Egyptian Islamic thinker who wrote one of the Muslim Brotherhood's most important books on anti-Western jihad. He was arrested with his brother Muhammad for allegedly plotting to kill Egyptian leaders and wanting to overthrow the government. Sayyid was later executed by the Egyptian government.
Muhammad, however, went on to greater glory as an author and professor of Islamic Studies at a university in Saudi Arabia. Muhammad Qutb a mentor to a young man you might have heard of, Osama bin Laden. 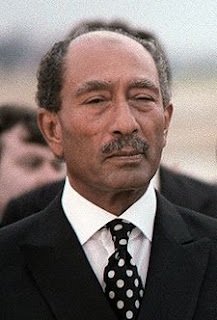 After Nasser suffered a heart attack and died in 1970, his fellow revolutionary Anwar Sadat took over as President.

After becoming a national hero for his success in the Yom Kippur War with Israel he fell out of favor with fundamentalists when he later made peace with the Israelis. He was assassinated by the Muslim Brotherhood in 1981. He was succeeded by his Vice President Hosni Mubarak who was injured in the attack that killed Sadat. With the failure of the Soviet Union, spheres of influence in the region shifted as well and Egypt became an American ally, much to the chagrin of Muslim extremists in the region.
Since 1922, Egypt has had five kings and presidents and the Muslim Brotherhood has either assassinated or attempted to assassinate two of them.


In the final segment of this discussion tomorrow, I’ll discuss the Muslim Brotherhood in the context of today’s Middle Eastern politics and our need in America to remember what we stand for so we can speak with clarity about our hopes for Egypt.
Posted by Rob Doss at 11:05 AM
Email ThisBlogThis!Share to TwitterShare to FacebookShare to Pinterest