Pensacola's Confederate Monument (Part 1): "'A Dose of Tough, Yet Crucial Medicine'...but for Whom?" 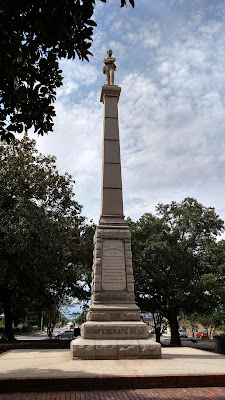 Across the Nation, monuments and statues of all sorts are being removed. In Pensacola, Florida, the City Council has voted to relocate the city’s monument to Confederate war dead from Lee Square.

The Pensacola News Journal has made quite an effort of laying before the public the case for removing Pensacola’s Confederate monument from its pedestal in R. E. Lee Square. Beginning with a June 29, 2020 article bearing the title, “A ‘coup’ led by white supremacists led to placement of Pensacola’s Confederate monument,” a title that conspicuously foretold the News Journal’s position on the subject, the newspaper based its provocative point of view on the opinions and logic of historians it cited in the article and on its own editorial conclusions.

Concerned about gaps in the reporting of the history of the monument, I decided to conduct my own investigation. The result is a series of eight thoroughly researched articles with footnotes and references linked throughout that reveal that the motives behind the construction of the monument weren’t quite as they’ve been described.

Before we begin, however, I’d like to prepare the reader for the fact that this series doesn’t advocate for either removal or retention of the monument. It simply clears the air on the history of the monument so others can develop well-informed positions on it. Any action—or inaction—with respect to the monument should be taken for the right reasons.

There’s another reason for telling the history accurately. There are people embedded in the history who have descendants and who have life stories that should be told truthfully. We can’t presume to possess the authority to be the voice of social justice if it means being unjust toward others or their memories in the way we go about that.

One area where the article came up short in its exhaustive expose of the racist proclivities of public officials, Confederate soldiers, and common citizens was in not revealing to its readers the role the news media played in promoting those activities and in propagating what some historians know as the “Lost Cause” narrative and tying it to the monument. But the news media itself was the mouthpiece for those racist policies, and the narrative that it today says inspired those policies.

Why is that important? Because the newspapers were right there for it all and they had a primary record of the events as they unfolded. Rather than rely substantially on the assumptions of others about the origins of the statue, it could have looked back to its own archives and in the archives of the other newspapers of the time. They could have gone to the primary sources and placed the entire story in its full and accurate context. But they didn’t. They had a unique insight into the events of the time, but they didn’t refer to it.

For instance, the June 29, 2020 News Journal article tied the timing of Confederate veteran commemorations at Pensacola’s Confederate monument to the Pensacola city government’s passage of a 1905 ordinance that segregated the city’s public transit system, including its streetcars. The News Journal wrote, “In the 20 years after the monument was installed...Pensacola passed an ordinance segregating its public transit system in 1905.” The article continued, “All the while commemorations of Confederate veterans were held at the monument.” 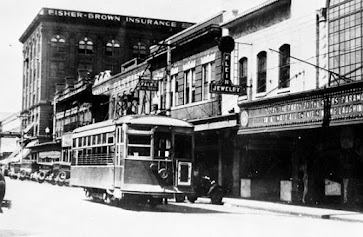 However, two articles published three weeks apart in 1905 told the story of the boycott quite differently than the June 29, 2020 article did.

The first 1905 article reported that while some African Americans supported legislation that segregated streetcars, others did not. The newspaper observed, “A number of negroes have been noticed on the cars, but in each case when they are seen by persons of their own race they are subjected to taunts and cries of ‘Jim Crow.’ This, however, has no effect upon the more intelligent class of negroes, who are satisfied that the company will provide accommodations sufficient for them.” The article was no less than a full-throated endorsement of racial segregation on public transportation. A mistake? Yes. It helped create an air of legitimacy for segregation. But more insidiously, that part of the June 29, 2020 article gave the reader the impression that somehow there was a close connection between the segregationists and the Confederate veterans who attended commemorations at the monument.

The second 1905 article, published in the News Journal on April 27, 1905, described the Memorial Day commemoration held at the Confederate monument very differently than the newspaper implied in its June 29, 2020 article. The 1905 article appeared under the headline “Heroes of Confederacy Honored in Pensacola” with subheadings “Admiral Evans Sent Flowers,” and “W. A. Blount, Jr. Delivered an Eloquent and Appropriate Address.” The article reported that the event was attended by senior naval officers from visiting U. S. Navy ships. “Seated upon the stand, with the others, were the following officers from the fleet now in the harbor: Admiral C. H. Davis, Admiral Royal B. Bradford, with their aides; Capt. Raymond P. Rodgers, of the Kearsarge; Captain Benj. F. Tilley, of the Iowa; Captain W. S. Cowles of the Missouri; Captain Edward D. Taussig of the Massachusetts; Captain H. G. O. Colby of the Olympia.”

Three week later on May 20, 1905, Pensacola News Journal carried an article in which the paper reported on the black boycott of city streetcars that arose out of legislation that segregated streetcar transportation service.

Then in another attempt to link two events simply by virtue of the fact that they occurred at about the same time in history, the June 29, 2020 News Journal article noted, “In the years after the monument’s placement, as city politicians instituted a white-only primary for Democratic politicians and white supremacy was quoted again and again as the goal of the political establishment, celebrations and memorials for Confederate veterans were held at the monument.” Connecting two unassociated events like that creates a logical fallacy.

What’s more is that in an April 27, 1935 editorial, the News Journal callously and crudely endorsed the plan that prevented African Americans from being influential as a bloc and playing a part in determining the balance of power in Pensacola politics thus suppressing the power of their vote. In making their case, the editors wrote in the 1935 editorial, “No one objects to the Negro voting. Large numbers of them use the ballot intelligently.” The editorial went further in its conclusion, reflecting the mindset of many, particularly in the South, who saw races of people as “having their place” and of course, needing to know their place in a segregated society. “Pensacola is a city of white folks. Negroes have their place. A great majority of them are good citizens. But, when we are selecting men who are to govern us, we do not want any balance of power to be in the hands of the colored people. Nor do we believe they want it.”

That sentiment was shared in at least one other Southern newspaper nearly 50 years before. In an editorial in the October 16, 1889 issue of the Memphis (TN) Avalanche, the editor wrote, “The Republicans will please take notice that the white people of the South do not intend to submit to be governed by negroes in any manner whatsoever...God Almighty never intended, the framers of the Constitution never intended, that the descendants of African slaves should rule America or any part of it.”

How does that sentiment survive among educated and enlightened editors after so long? How does that mindset continue to exist 70 years after a war that resulted in so many American deaths and the destruction of so much American property, a war that produced constitutional remedies that were designed to correct that very behavior? And how does an article like the one in the June 29, 2020 issue of the News Journal use episodes in history to allege and imply racism on the part of others and then tie them to the Confederate monument without referencing primary sources as proof of that?

Again, while it was cramming events together to claim a racist connection to the monument, the newspaper failed to tell about the one indisputable connection to both: its own.

When News Journal’s failure to acknowledge its own role in those events was pointed out to the newspaper, citing those two examples, the newspaper, to its credit, followed with a July 4, 2020 editorial titled, “Pensacola, and this paper, have histories of failing to deliver moral justice. Time to do better.“ that explained that the original article was about all the corrupt violation of the civil rights of African Americans in those days “and more — the corrupt government, the theft of rights, the abuse of power, the executive overreach, the deep-seeded hate, and yes, the erection of the monument on Palafox, a piece of stone intended to dignify, sanitize and whitewash all the treasonous sentiments and corrupt behavior of those who had unjustly seized power in this city.” The editorial then confessed that it was among those in Pensacola’s past that were legally and morally wrong in that they “ignored many of those gross injustices, empowered or excused corrupt officials and at times, advocated for policies that stripped rights from black citizens. From derisive and inaccurate language in news stories to editorials that argued on behalf of restricting black Pensacolians’ right to vote, this newspaper was tragically and fundamentally wrong on some of the most important moral and civic issues of the day.”

That “mea culpa” was a necessary and important part of the discussion if we’re to be serious about understanding and improving on our history although it still held to its original distorted telling of the motives behind the monument. The editorial rightfully gave the newspaper the “dose of tough, yet crucial medicine” that it had earlier prescribed for others who needed some reflection, but it failed to swallow the entire spoonful.

Certainly, no one currently on the newspaper’s staff participated in those wrongs and they would no doubt take a decisive opposing stance on the matter if it arose today. However, the newspaper has not reconciled itself to the fact that as its reporting was biased in the past, it seems that it remains that way today and as before, it uses its megaphone to lift its message and agenda to the ears of people who might be influenced by it to do the wrong thing.


Next: Part 2: "Conflicting Stories"
Posted by Rob Doss at 10:04 PM
Email ThisBlogThis!Share to TwitterShare to FacebookShare to Pinterest