Again, we can agree that no one currently on the Pensacola News Journal's staff would take the kind of racist stances that it did in its 1905 and 1935 articles, so let's turn to the question of whether the News Journal reached too far in its June 29, 2020 article when it drew connections between the racist activity that was cascading through the South—and in some parts of the North and West—after Reconstruction and the construction of the Confederate monument in Pensacola. 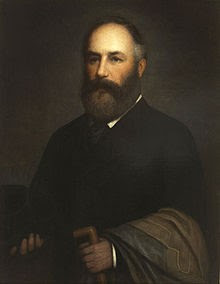 The first link in that alleged connection occurred when Florida Governor E. A. Perry replaced the elected city governments of a number of Florida cities with appointed members of provisional local governments in what the June 29, 2020 News Journal article characterized as a "coup." The News Journal reported that "Perry revoked Pensacola's city charter in 1885, along with other Florida cities, and created state-appointed city governments made up completely of white Democrats." Then the newspaper cited a historian who said, according to the paper, that the action was a coup d'etat to end Black participation in local government and fill city governments with white supremacists. That statement in this context leaves the implication that replacement Pensacola city commissioners F. C. Brent, W. D. Chipley, George W. Witherspoon, Edward Sexaner, W. H. Hutchinson, John Burns, and S. S. Harvey were white supremacists, even if they didn't say it outright.

However, the February 21, 1885 issue of the Pensacolian newspaper published the text of the Governor's proclamation that stated that the basis for the replacement of the elected commissioners was that the city was $200,000 (approximately $6 million in today's dollars) in debt and had defaulted on the interest it owed. Whether the city's debt was legitimately the reason for replacing the commissioners or was a convenient excuse for ejecting African Americans from office in Pensacola wasn't mentioned in the Pensacolian newspaper, nor was the proclamation that authorized the change of city government mentioned in the June 29, 2020 News Journal article.

But the Pensacolian editorial staff did address the change of leadership and the debt a month later in its March 21, 1885 issue when it wrote of the new commissioners, "All right-thinking people must acknowledge that the present is infinitely preferable to the past," even as it noted that the move to replace the elected commissioners wasn't popular among a majority of the citizens. It also referenced the fact that the new commissioners were "at the outset, confronted with a heavy, interest-bearing debt" that they should dispose of without hardship to Pensacola's citizens.

So, either today's Pensacola News Journal mischaracterized the Governor's replacement of the commissioners in 1885 as a "coup," or the Pensacolian deceived the public about the matter in 1885.

The second link in the alleged connection was Governor Perry's involvement in the writing of the 1885 Florida constitution. In its June 29, 2020 article, the News Journal wrote, "Perry oversaw the writing of a new state constitution that got rid of the one written during Reconstruction, and the new constitution enabled a poll tax and other policies designed to disenfranchise Black citizens." Throw in the Pensacola "coup" that the News Journal alleged and that's how the newspaper characterized Governor Perry's first six months in office.

It's true that the 1885 constitution authorized a poll tax as a requirement for voting (Article VI, Section (8), required racial segregation in schools (Article XII, Section 12), and prohibited marriage between "a white person and a person of negro descent" (Article XVI, Section 24).

But to draw a connection between that and the decision to build a Confederate monument seems to be a bit much since of the thirty-eight states that required poll taxes in 1923, all but eleven of them were in Northern and Western states. Also, segregation policies were not only common in the South, they were widespread in the United States, and in 1896, segregation was ruled constitutional in schools, churches, and public transportation in the U. S. Supreme Court 's Plessy v Ferguson decision.

So, if the writing of poll taxes and segregation into the Florida Constitution of 1885 led to the construction of the Confederate monument in Pensacola, it didn't seem to have the same effect in Northern and Western states that had the same kinds of provisions.

The third link in the alleged connection was the renaming of Florida Square to R. E. Lee Square. In its June 29, 2020 article, the News Journal reported, "The state-appointed commissioners who ran the city government of Pensacola entered office and began renaming one of the most prominent points in the city from Florida Square to Robert E. Lee Square after the Confederate general in 1887 — the name it still bears today." 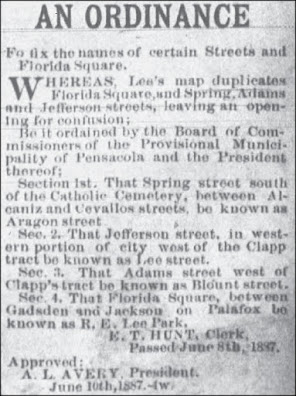 The article gives the impression that the new commissioners were seated then they immediately turned to the work of renaming the square, but in truth, they had a debt to resolve when they entered office and the square wasn't renamed for another two years after they took office.

Then, as the posting of the ordinance in the July 2, 1887 issue of the Pensacolian newspaper recorded, the commissioners renamed the square, which at the time was at the northern edge of developed Pensacola, "R. E. Lee Square" at the same time that it renamed three streets, citing as the reason for doing so the fact that the existing names were all duplicates in Lee’s Map. As the city grew during those years, they named and renamed several streets. (Today's residents who are confused by the multiple names assigned to the same thoroughfares might wish the 1887 commissioners' successors had renamed more streets.) 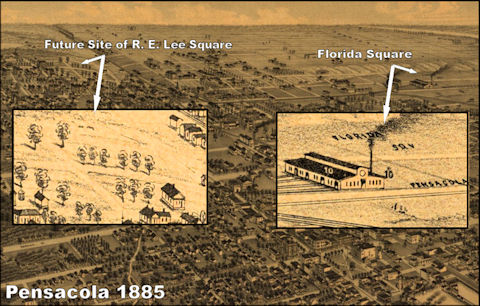 In spite of the theory of a racist motive behind renaming of the square on Palafox Street for a Confederate military hero and the subsequent erection of a Confederate monument there, history suggests a different motive.

Many Pensacolians are aware that Lee Square sits atop Gage Hill, named for British Revolutionary War General Thomas Gage. General Gage was the British Commander-in-Chief in America during the early days of the Revolutionary War when the British began tightening the screws on the Colonists. When the British occupied Pensacola between 1763 and 1781, General Gage built Fort George on the hill because it overlooked Pensacola and its vulnerable fortifications. From its vantage point on the hill, the fort protected the old Spanish fortifications that the British had refurbished for the defense of Pensacola. When the Spanish overwhelmed British forces during a siege in 1781, the Spanish assumed control of the fort and renamed it Fort San Miguel (St. Michael). Then, during the War of 1812 Battle of Pensacola in 1814, the fort was targeted by General Andrew Jackson who led his army against the British and Spanish who were holding Pensacola. Finally, with the British making a hasty retreat from Pensacola, the Spanish surrendered Fort San Miguel to Jackson.
The spot on which Florida Square then R. E. Lee Square was situated was more than a patch of grass; it had been a site of military significance for more than 120 years by the time it was renamed R. E. Lee Square in 1887.

Next: Part 3: "A Monument Wrapped in a Narrative"
Posted by Rob Doss at 8:14 AM
Email ThisBlogThis!Share to TwitterShare to FacebookShare to Pinterest