Pensacola's Confederate Monument (Part 3): "A Monument Wrapped in a Narrative"

The June 29 News Journal portrayed the renaming of the square and the subsequent placement of the Confederate monument there as owing to the racist motives that inspired the 1885 Florida constitution and the replacement of the elected Pensacola city government with appointees, the "coup." Then, it said that the renaming of the square and the monument was an outcome of and then a part of a post-Reconstruction revisionist story line called the "Lost Cause" narrative.

The article—and the subsequent editorial—advanced the notion that the construction of the Confederate monument was connected to the "Lost Cause" narrative on very little evidence other than the testimony of historians who made broad and sweeping statements about what happened in those days and why, again without evidence other than their word and the fact that these events occurred within the same span of time.

As the Lost Cause narrative goes, Southerners who were vanquished in the Civil War engaged in a revisionist telling of the war's causes and outcome. They didn't deny that the "cause" was lost in the war, but they believed it enjoyed a second life after the war. The Lost Cause is characterized by an overly romanticized depiction of the chivalry and nobility of the Southerner, a denial of the abuses imposed on slaves, and a lofty exultation of its heroic wartime leaders. The theory holds that Southerners who lived and acted within the Lost Cause narrative understood that they lost the war, but that they would win the peace. The proposition was that they would win the peace by suppressing Blacks and imposing their will on them, even though the war was lost and slavery had ended. The theory is stretched further in using the Lost Cause narrative to explain the rationale behind the construction of Confederate monuments.

Without dredging too deeply into the origins and nature of the Lost Cause narrative, let's say that while it was an actual phenomenon, mostly because it was contemporaneously documented, it probably gets more credit for influencing events in history than it earned. It's worth noting that even its presumed originator, Edward Alfred Pollard, stepped back from the more volatile aspects of the narrative as Reconstruction made some of his predictions and aspirations—such as a return to armed conflict and a resumption of slavery—unlikely to succeed. In fact he followed his original "Lost Cause" book, "The Lost Cause: A New Southern History of the War of the Confederates" published in 1866 with "The Lost Cause Regained" two years later in 1868, which was really an entirely "new thought," according to biographer Jack P. Maddex.

Maddex reported that in the latter book, Pollard withdrew some of his earlier positions. He wrote, "Showing new respect for President Abraham Lincoln and the northern masses, he called their intentions for Reconstruction moderate and acceptable. He endorsed all of Johnson's programs including the suppression of the Confederacy, his military occupation of the South, his insistence on emancipation and repudiation of Confederate public debts, and his excluding of many 'rebels' from general amnesty. Secession, Pollard now argued, had been a legal nullity, and the northern conquest had been 'a government merely recovering its own territory and re-asserting its authority over its own subjects.'" Moreover, Pollard "renounced the 'two nations' premise" that held that the North and South conflicts were essentially conflicts of cultures constructed upon different economies, a difference between economies and cultures shaped around a free-labor workforce versus a slavery workforce.

Thus, much of what has been made of the Lost Cause narrative had been repudiated by its author by 1868 and even more so later. That left only the politicians and newspapers to advance its discredited precepts.

It also seems that too much is made of some of what have been described as features of the Lost Cause narrative such as the claim that the war was lost due to the South being overwhelmed by the North's troop strength, wealth, and resources. That likely arises out of Lee's farewell address after the surrender at Appomattox in which he wrote, "After four years of arduous service marked by unsurpassed courage and fortitude, the Army of Northern Virginia has been compelled to yield to overwhelming numbers and resources." It is unlikely that Lee would have written that his army was overcome because of the South's inferior courage, tactics, and leadership because he simply wouldn't have believed it was true and he wouldn't have said it under those circumstances if it was. At times, the use of the Lost Cause narrative to explain events seems to reflect a resentment over the fact that the South wasn't sufficiently supplicant, which ironically mirrors the sentiments of radical Republicans in the late 1800s. 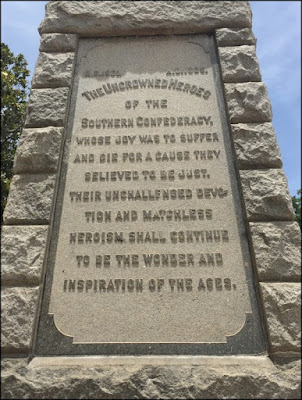 They over-exert their efforts to assign a vile motive to understandable behaviors like Lee's assertion that the South lost the war because it was out-manned and out-resourced by the North or the South's desire to honor its war dead as heroes. They split hairs to say that monuments honor a Lost Cause because, they say, they pay tribute to discredited principles when, in reality, they pay tribute to soldiers who died heroically for causes and principles that they believed were just. The true sentiment is actually etched into the Pensacola monument and it's recorded in the words of the men who spoke at its dedication.

The News Journal's determination to prove that linkage is illustrated in the June 29, 2020 Pensacola News Journal article in which the newspaper claimed, "A 1904 book on Confederate monuments published by the Confederated Southern Memorial Association preserves part of an 1890 fundraising letter sent by William Chipley, a Pensacola politician and former Confederate officer... The letter quoted Perry's wife noting the location of Lee Square in front of the school where the monument should be placed aimed at educating future generations about the 'Lost Cause.'" Then, the article accurately quoted Chipley's letter although the aspersion had already been cast when it characterized his motives as being aligned with the Lost Cause narrative, "Coming generations will learn, with their daily lessons, to honor our beloved dead." In telling it that way, the June 29 News Journal article said that honoring the South's "beloved dead" was synonymous with the racist Lost Cause narrative.

The book cited by the News Journal was titled "History of the Confederated Memorial Associations of the South," published by the Confederated Southern Memorial Association in 1904. The words "Lost Cause" were used only four times in the entire book, always in reference to the war itself, not to the romantic vision of the post-war South that the News Journal described, and certainly not in reference to the Pensacola Confederate monument. Not once.

Again, if we go to a primary source, in this case page 6 of the April 27, 1890 issue of the predecessor of today's Pensacola News Journal, the Pensacola News, we see that in Col. Chipley's fundraising letter dated April 22, 1890, he didn't quote Mrs. Perry as the News Journal said; he made a suggestion to Mrs. Perry "...That work be commenced at once in the center of R. E. Lee Square in front of public school No. 1 where coming generations will learn with their daily lessons to honor our beloved dead." Again, the words "Lost Cause" were neither used nor implied in his letter.

The theory that the Lost Cause narrative had significant implications on policies that included the decision to build Confederate monuments throughout the South is an example of the tendency that historians have to encapsulate complex events in simple terms that make the digestion of the conclusions that surround them more palatable to an audience that isn't particularly inclined to conduct its own research. Where these "nutshell" approaches are lacking, however, is in their failure to fully consider and reflect the nuances of context and compound factors that tend to reveal the motivations of those who made history. When they're not overdone, these captions on history can be useful; but when they are overdone, they can distort our understanding of history.

The June 29 News Journal article theorized that the Lost Cause narrative was tied to post-Reconstruction racism in the South and that the honors that were bestowed upon the South's war dead and other heroes was associated with both the Lost Cause narrative and racism. Without citing specific causal evidence, the News Journal article connected those three elements merely by virtue of the fact that they occurred within the same period of time. Historians and journalists alike are cautioned not to assume that because two or more events occur at the same time, one necessarily causes the other, but that seems to have happened here.

If the Lost Cause narrative theory was validly applied in the recent reporting on the Pensacola Confederate monument and the connection of the narrative to the construction of the Confederate monument was also validly applied, the News Journal's June 29 article and July 4 editorial were silent in mentioning the pivotal role Pensacola newspapers played in advancing the narrative and in reconciling the fact that the evidence of corruption that the News Journal cited in the June 29 article didn't line up with the way events were recorded in Pensacola newspapers while the monument's construction was being considered.

Next: Part 4: "Proud Pensacola"
Posted by Rob Doss at 8:26 AM
Email ThisBlogThis!Share to TwitterShare to FacebookShare to Pinterest