Rescue from Mogadishu (Part 2): "A War of All Against All"

At about the same time that LtCol Wallace was preparing his squadron for the pre-empted deployment to the North Atlantic in July of 1990, James K. Bishop was being sworn in as U.S. Ambassador to Somalia. But, as Ambassador Bishop assumed his posting in Mogadishu, the Somali capital, the nation was slipping badly into turmoil and ruin. It had become a particularly dangerous place where ethnic groups, street gangs, clans, and others fought and created a breakdown of societal order,[1] a condition accurately characterized in the Marine Corps’ “Operational Maneuver from the Sea” concept paper as a “war of all against all.”[2] 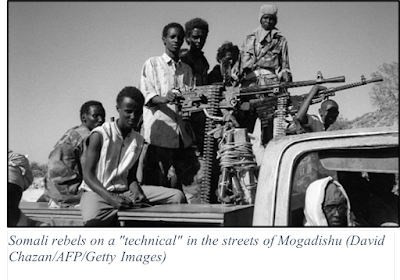 Embassies and Somali government buildings had been bombed, senior law enforcement officials had been assassinated, Westerners had been attacked and injured, and killings increased by the day. Twice in three weeks, a U.S. Embassy driver was shot and his vehicle was stolen. Ambassador Bishop later reported, “Vehicles were being taken and their drivers killed by soldiers, policemen, rebels, and common criminals throughout the city and at all hours of the day.” Robberies and gunfights outside the U.S. Embassy compound ultimately convinced American diplomats that they no longer had any real protection in the Somali capital. Then, the violence around the Embassy took a turn when a firefight outside of the Embassy gate sent bullets into the U.S. vice consul’s home.[3]

By December 19th, the number of official U.S. diplomatic staff members in Mogadishu had been reduced from 147 to 37 out of concern for their safety, a decision that was validated on December 31st when the U.S. defense attaché’s car was riddled with bullets and another officer’s vehicle was sprayed with gunfire at a roadblock to the extent that he had to limp the vehicle to the U.S. compound on its front rims. Ambassador Bishop later reported that on New Year’s Day 1991, fighting on the road that bordered the U.S. Embassy made the area a shooting gallery. Ambassador Bishop cabled Washington and asked for U.S. military assistance to evacuate the Embassy staff from the city as American lives were in grave danger.[4]

Posted by Rob Doss at 4:25 PM
Email ThisBlogThis!Share to TwitterShare to FacebookShare to Pinterest