Rescue from Mogadishu (Part 1): "In Every Clime and Place"

“(Operation) Eastern Exit received relatively little attention as it was conducted on the eve of the war with Iraq. In other circumstances, the execution of such a short-notice and high-risk operation might have garnered front page headlines around the world...The military operation itself might seem more like a Hollywood script than reality.”

The arrival of 1991 found us wrapping up our fourth month in the Middle East. I had been a member of Marine Medium Helicopter Squadron 263 (HMM-263) since July of 1990 when a few of us joined the squadron from a neighboring squadron, HMM-365, for a two-month deployment to the North Atlantic. As members of HMM-365, we had just completed a lengthy and highly successful deployment to the Mediterranean as part of the 24th Marine Expeditionary Unit (Special Operations Capable) (24th MEU (SOC)) when the call went out from HMM-263’s new commander, Lieutenant Colonel R. J. Wallace for volunteers to join the squadron and help bring some fresh shipboard experience to the deployment. 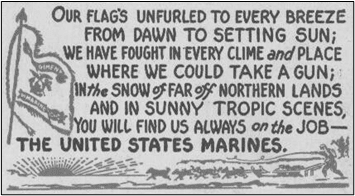 But then when Saddam Hussein, the leader of Iraq, invaded Kuwait a few weeks later on August 2, 1990, HMM-263’s plans for a short deployment to the North Atlantic and HMM-365’s thoughts of a much-deserved break after a demanding deployment were suddenly set aside. For the Marines of HMM-263 and HMM-365, both based at Marine Corps Air Station New River, North Carolina, responding to these rapidly changing events made the words “in every clime and place” from the Marines’ Hymn ring true.

The USS Guam (LPH-9) was a helicopter carrier and on Sunday, August 19, 1990, two weeks after Saddam invaded Kuwait, it would see twenty-four U.S. Marine Corps CH-46E Sea Knight helicopters land on its deck pierside in Morehead City, North Carolina. At the same time, Marines from HMM-263, HMM-365, and 1st Battalion, 2nd Marine Regiment from Camp Lejeune were bussed, trucked, and flown to the ship as it was hurriedly loaded for a destination that no one acknowledged but few doubted. The ship pulled away from the pier that evening.

After crossing the Atlantic Ocean and passing through the Mediterranean Sea, the Suez Canal, and the Red Sea, we arrived in the Middle East in early September 1990. Over the next several months, we were in and out of the Persian Gulf several times, jabbing repeatedly at Saddam with a series of bold exercises that were both, in plain view and widely reported. Even the name of the exercises, “SEA SOLDIER,” another name for Marine, sent a message. That message was “The Marines Are Coming.” The exercises were so effective, they tied down five or six Iraqi divisions along the Kuwaiti coast and caused a reaction by Saddam’s forces each of the four times between October and January that the U.S. ran a SEA SOLDIER exercise.[1]

Then, U.S. planners decided to launch an operation that delivered an even stronger message in mid-November 1990. Our assignment was to give the appearance of an assault into Kuwait before making a late turn to the desert just south of the Kuwaiti-Saudi border. That operation was called “IMMINENT THUNDER,” an apparent reference to the name of another operation that none of us yet knew: “Operation DESERT STORM.” Nonetheless, even if the allusion to “storm” in the word “thunder” didn’t yet carry much meaning to Saddam, the word “imminent” should have.

Between exercises, we conducted extensive training in the desert and at sea. We flew with night vision goggles (NVGs), gas masks, rubber chemical-protective hoods, and we flew between ships and in the desert all up, down, and around the Arabian Peninsula.

Then, around Christmas time, three Guam CH-46E helicopters were temporarily reassigned to the amphibious ship USS Trenton (LPD-14) with a raid force consisting of Marines and SEALs to conduct seizures and inspections of defiant Iraqi vessels, most notably the infamous Ibn Khaldoon and the Ain Zallah. When the two ships refused to follow instructions to stop and be boarded, they were quickly taken by force and brought into compliance.[2]

After a short port visit in Muscat, Oman, we went back to work again. President George H. W. Bush’s January 15, 1991 deadline for Iraq to withdraw from Kuwait loomed ominously.  Although we remained uncertain that we would be at war in two short weeks, we continued to prepare intensely for it as if it was a sure thing.

Posted by Rob Doss at 4:14 PM
Email ThisBlogThis!Share to TwitterShare to FacebookShare to Pinterest