Those Boys Ain't Quite Right 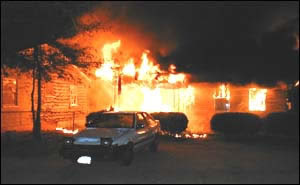 As I was proofing a previous post, I remembered another story that I probably shouldn't tell because someone might think that my brother, Michael, and I were not quite right in the head as kids.
I was probably 14 years old when an older kid who rode our school bus invited Michael and me to his house to swim in his pond. We were surprised because we were pretty sure this kid didn't like us. We decided to take advantage of the opportunity to make friends with a guy who had gone out of his way to be unkind toward us in the past, so we decided to ride our bikes to his house to swim.
When we got there, he was friendly enough. In fact, he showed us around his family's property as we made our way down to the pond. Near the pond, they had a little out building that wasn't quite finished on the inside, but it struck us as kind of a cool place because you could use it as a club house or place to camp out when you're fishing at the pond. He showed us inside, but then (to our surprise and disappointment) he shut us in and locked us inside the building. He was pretty clear about not letting us out and we were pretty clear that if we didn't find a way to get ourselves out, we'd NEVER get out. Of course, if we had thought this through, we would have known that we would EVENTUALLY get out of there, but this was a time for action, not for thinking things through.
We found some matches in a drawer in the building and told the kid that if he didn't let us out, we'd burn the place down. Never mind that we'd be burning it
down while we were still inside! (I would like to be able to blame that idea on my brother, but no one would believe me.) The kid clearly had a pretty good reason to believe we were bluffing. I mean, who in their right mind would intentionally burn the building down while still inside? The problem for our new "friend" was that we weren't bluffing. When he blew us off and started swimming and enjoying himself as we sweltered in the shack, we decided to go ahead and light the bedsheet curtains they had on the windows on fire. We hollered to the kid in the pond that the shack was now on fire. When he saw the curtain on fire, he wasted NO time in getting us out of there.
He rushed in and quickly doused the fire, limiting the damage to that one curtain. We walked out together, but he had lost all of that spirit of hospitality that he seemed to have before. We rode our bikes the 3 miles or so to our house, disappointed that we didn't get to swim, but nonetheless satisfied that we got the best of a bully.
I don't think I've told that story to anyone who has thought we were quite right in the head that day. I'm sure some look at this as one of those potential Darwin Award winning events where someone does something incredibly stupid and kills himself doing it, but we were pretty sure we had the situation well in hand. We were willing to bet (literally bet it all) that this kid would be more interested in keeping the place from burning down than in keeping us locked up to burn down with it. Turns out we were right.
Still, though, I'm glad we've outgrown that sort of madness...
Posted by Rob Doss at 7:55 PM
Email ThisBlogThis!Share to TwitterShare to FacebookShare to Pinterest