I'm sure you've seen the GEICO Insurance commercial where the squirrel runs out into the middle of the road, causing a car to swerve and run off the road. After the car crashes, the critter's little squirrel buddy runs out and they high-five and dap each other. They're pretty proud of themselves and GEICO rubs it in with their preaching about how easy it is to get GEICO.
So, I was driving down a narrow road early yesterday morning when a squirrel ran out in front of my car just like that one did in the GEICO commercial. The road was fairly narrow so I didn't even hesitate in my decision to bear down on that squirrel rather than steer out of my lane to miss it.
Before you judge me as insensitive and cruel, let me say that there was no way that I was going to veer off the road into a ditch or a tree and leave a couple of tree-climbing rodents to high-five each other in the middle of the street at my expense. 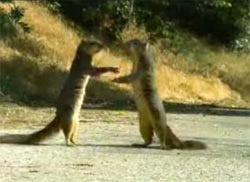 Instead, I lined up on that squirrel. He got all bug-eyed when he realized he was dealing with a little different breed of cat here because I wasn't going to swerve. He jinked to my left, then he juked to my right, then he ran like a scalded dog to my left into the ditch that he was trying to get me to run off into.

My first reaction was that that was poetic justice. Instead of me ending up in the ditch, that gloried rat took his turn in it. I started thinking that we drivers might be beginning to figure some things out. We're gripping our steering wheels a little tighter and we're sticking to our lanes. We're not swerving, we're not slowing down, we're not even cringing at the thought of what might happen to one of these adorable little things if they don't get out of the way. Let them face that moment of indecision! Let them experience that momentary panic! Let them have a little taste of ditch water! "Fifteen minutes could save you 15% or more on car insurance." Right... Tell that to the squirrel I ran off into the ditch yesterday, GEICO!
Easy now... 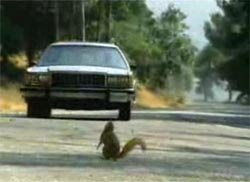 Okay, let's put all of that aside... I sit here in the calm of a new day, wondering about how that commercial has affected other drivers, and just how many squirrels that commercial has killed. I wonder how many drivers see what I saw - a squirrel just sitting there in the middle of the road - and decide to center up the hood ornament on the squirrel rather than meet the unfortunate fate that the driver in the GEICO commercial did. How many squirrels have been flattened because they thought the driver was going to steer clear, but didn't?
And whose fault is that anyway? After yesterday morning's incident, when I see a dead squirrel in the street, I'm thinking, "There's another squirrel that GEICO got killed."

Way to go, GEICO!
Posted by Rob Doss at 10:30 AM
Email ThisBlogThis!Share to TwitterShare to FacebookShare to Pinterest