A Place in the Electric Chair 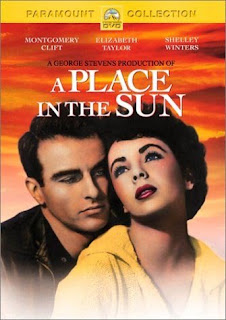 So, I guess I just haven't been keeping up. I saw a movie the other evening for the first time in my life. I hadn't even heard of it, but I was sort of eavesdropping on the Turner Classic Movies station as the host - I think it was Robert Osborne - introduced the next feature saying that it was his favorite movie of all time. That got my interest up, so I paid some attention.

The movie was A Place in the Sun and I checked the description of the movie to see if it had a chance of being interesting to me, and it did.

I don’t want to ruin the movie for you, but the thing’s been out since 1951 so it’s not like you haven’t had a chance to see it already…

Anyway, Montgomery Clift plays George Eastman who is an uneducated directionless young guy who hitchhikes to his Uncle Charles’ place. Uncle Charles owns a swim suit factory (that turns out to be ironic) and puts George to work. The company has a “don’t date the other employees” policy, but George ends up secretly making time with one of his co-workers, Alice Tripp, played by Shelley Winters.


Now, I’ll tell you up front that I have a hard time listening to Shelley Winters speak. Her quivering, almost fussy voice is unnerving when it’s not just downright annoying, but it could be argued that it played into the plot.


So anyway, George made enough time with Alice that she somehow ended up becoming pregnant, but he was starting to move up in the company and ended up at a party at his uncle’s house on the lake where this beautiful debutante Angela Vickers, played by Elizabeth Taylor, was a guest. 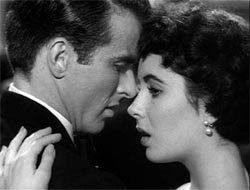 Let me step aside again to say that Elizabeth Taylor was a very pretty woman back in the day. In this movie, she was 17-years old in real life and you could see that she was going to become the kind of woman that at least 7 guys would want to marry (8 if you count Richard Burton twice for the two times he married her).

She was a looker and George Eastman had no problem noticing that. George took a quick liking to Angela and over the ensuing 30 minutes or so he fell deeply in love with her while Alice became more and more pregnant (and impatient with George).

Finally, Alice saw a photograph in the paper of George living it up with Angela and the Eastmans on the lake, so she packed up her things and decided to go to George and claim her man. 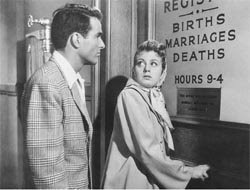 She arrived and phoned George and shamed him into agreeing to marry her. Unfortunately for all concerned, the courthouse was closed and they couldn't get married that day. So, George figured that since the courthouse was closed and he really didn't want to marry Alice anyway – especially with lovely Angela waiting in the wings – that he would just take Alice out boating in the middle of the night and drown her. It must’ve made sense to him at the time.

It was to Alice’s discredit and ultimate misfortune that she had already told George she couldn’t swim. (A person should never make that kind of admission to someone without knowing them really well first.)

Once in the boat, however, George had second thoughts and crawled to the far end of the boat to get himself together (and probably to get away from that voice, too); he knew he wasn’t really a murderer. Then, Alice started going on and on, telling George how happy they were going to be together, just hours after threatening him with ruination. (A guy’s just got to spot that kind of inconsistency earlier in the relationship.) Then, she stood up to walk toward George while still yakking away. The boat started rocking badly, so George told her to sit down, but she didn’t and the boat capsized.

George swam to the shore safely, but remember, poor Alice couldn’t swim so she pretty much stayed out there and drowned. George had stashed a getaway car in the woods, so he made his way back to the house where Angela was. George was a bit of a brooder anyway, so no one could tell from his manner he had just left Alice out in the middle of the lake to drown. I guess they thought he was just being his strong, silent-type self.

Ultimately, George was arrested and tried. The fact that George and Alice had been seeing each other on the sly, that Alice was pregnant, that George rented the boat under an assumed name, that George had staged a getaway car, and that Angela was a really hot Plan B were powerful bits of circumstantial evidence against George in court. As much as all of that was stacking up against George, I knew he was in trouble the minute I saw that Perry Mason (Raymond Burr) was the district attorney. I’ve never seen him lose a case.

George was convicted of first-degree murder and sentenced to death – because that’s what Perry Mason asked the jury for. The movie ended as George was about to meet his fate.

There are some important lessons in this movie that are worth remembering:

1. There was a company policy that forbade co-workers dating each other, but George and Alice did so anyway in secrecy. Alice became pregnant and, in the end, the implications of this very private affair became quite public.

LESSON: Rules are rules. Just because you break the rules in private doesn’t mean they aren’t broken.

COROLLARY: Just because you break the rules in private doesn’t mean that the implications will be private; in fact, if there are implications, they probably will not be private.

2. Alice had a way about her that seemed a bit pushy and insecure and she betrayed that sense with that voice that I've already described. The din of her tone was troublesome early on, but it really rose to a peak once she got around to delivering ultimatums to George, then rambling about their coming blissful future together while they were in the boat.

LESSON: In a relationship, things that bother you a little bit now will bother you a lot more later when times are tougher and patience grows thin.

LESSON: Don’t get yourself into situations you can’t get out of if getting out of them means making matters worse.

COROLLARY: Realize that situations that make you queasy give you that feeling because even if your brain doesn’t know it’s a bad situation, your gut does.

4. George took Alice out in the boat intent on murdering her, but then he changed his mind. Unfortunately, the boat capsized anyway. George swam for the shore and left Alice behind where she drowned because, in part, George didn’t intervene to save her. In the end, he didn’t want her alive badly enough to try to save her life.

LESSON: When you change your mind on an issue of importance, change your heart too. If you find yourself in the middle of the lake (figuratively) when your conscience kicks in, row to the nearest shore as quickly as you can before something terrible happens.

5. Alice knew she couldn’t swim. Combined with a poor sense of balance in an environment where she should have had a natural fear of dying, she tried to walk from one end of the boat to the other, making it rock severely until it capsized.

LESSON: Don’t rush headlong into unfamiliar territory. When the unknowns far outweigh the knowns, you are left to rely on instincts and raw ability alone because familiarity and knowledge are no longer part of the equation. If you're in a boat in the middle of the lake at night, a swimming instinct or ability (or a life jacket) is useful.

COROLLARY: If you can’t swim, don’t rock the boat.
Posted by Rob Doss at 2:41 PM
Email ThisBlogThis!Share to TwitterShare to FacebookShare to Pinterest