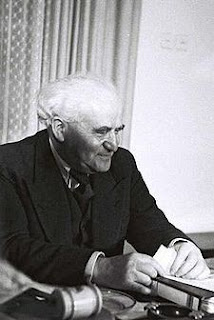 With increasing pressure on Israel by the Obama Administration (and the Bush Administration before it) to stop building settlements in the West Bank and the Golan Heights because the United States (and the European Union) considers the settlements to be provocative toward the Palestinians, it's interesting to quickly review how we got to this point...

In 1948, David Ben Gurion, who became Israel's first prime minister, declared Israel a state in keeping with the United Nations' 1947 partitioning resolution that divided the land that was known as Palestine into Jewish and Arab states.

Arab League members Egypt, TransJordan, Syria, Lebanon and Iraq almost immediately invaded the territory that fell under this partitioning rule, but the Israelis repelled them for the most part and established new borders that held up for another eight years.

With the Israeli state only eight years old in 1956, tensions simmered, complicated by European interests in the region. The British had become a fixture in the Sinai region by 1956. They had a strategic interest in the Suez Canal so it could access its colonies in India and elsewhere, but Egyptian President Gamal Abdel Nasser was eager to counter British influence over the Suez Canal and to nationalize it. Israel had its own complaints. Since its establishment in 1948, ships headed to and from Israel through the Suez had been repeatedly intercepted or destroyed by the Egyptians. 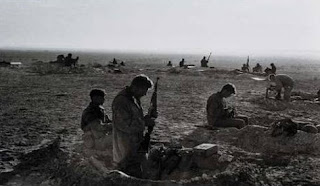 So, in the summer of 1956, Israel, France, and Britain conspired to do something about Nasser's plan to nationalize the Canal. The plan called for Israel to invade the Sinai Peninsula. Meanwhile, Britain and France would issue an ultimatum to Egypt and land forces to separate the Israelis and Egyptians.

Israel quickly controlled the Sinai, but an angry reaction by the United States and a UN resolution calling for a withdrawal of forces caused the Israelis to withdraw with an American assurance that its shipping would be safe on international waterways. The United Nations then stationed the United Nations Emergency Force (UNEF) in the Sinai. 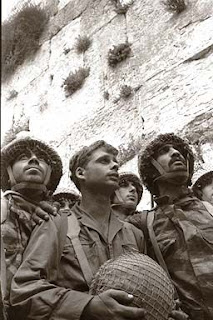 However, tensions between Israel and Arab countries in the region continued to grow into the 1960s. By mid-1967, Nasser had expelled UNEF troops from the Sinai and moved in with Egyptian forces. Israel countered with a troop deployment of its own. Then, Egyptian President Nasser said in a radio broadcast, "The existence of Israel has continued too long. We welcome the Israeli aggression. We welcome the battle we have long awaited. The peak hour has come. The battle has come in which we shall destroy Israel."

Soon after that, Jordan signed a defense pact with Egypt in preparation for war, and then on June 4, Iraq joined the alliance against Israel. These growing threats and hostile alliances, combined with the fact that Egypt had closed the Suez to the Israelis motivated Israel to attack the Egyptian forces on June 5, 1967, commencing the Six Day War.

Israel took the Sinai Peninsula in the first four hours of the war. On the first day of the war, Jordan launched artillery fire at Jerusalem until Israel warned it to stop. Israel then moved into and seized the Jordanian-held West Bank. Meanwhile, the Syrians fired artillery into northern Israel from the Golan Heights, so after it finished dealing with Egypt and Jordan, Israel seized the Golan Heights from the Syrians. Israel agreed to a cease fire on June 10.

So, the outcome of the Six Day War was that Israel significantly enlarged its borders and increased its population by about a million Arabs. A UN resolution called for negotiations and for Israel to withdraw from lands it seized in the war.

Under pressure from the United States, Israel offered to return the Sinai and the Golan Heights to Egypt and Syria, respectively, but Egypt and Syria refused to negotiate with Israel (in part, because they refused to recognize the existence of the Jewish state).

In October of 1973, Egypt and Syria launched another war (The Yom Kippur War) against Israel. The Egyptians came across the Suez Canal on October 6 on Yom Kippur, the holiest day on the Jewish calendar. Meanwhile, the Syrians came into the Golan Heights, a territory it had lost during the Six Day War.

The attack took the Israelis by surprise, but after initially suffering heavy losses, Israel retook the Golan Heights. Israeli troops then crossed the Suez and cut off the Egyptian army. By the time a cease fire ended most of the fighting a month later, about 2,700 Israeli soldiers and 8,500 Arab soldiers had been killed.

The Israelis held on to the Sinai, the Golan Heights, and the West Bank, all territories it captured during the 1967 Six Day War, and they have built settlements in the area off and on ever since.

To be sure, the Israelis have given some offense of their own, sometimes biting the American hand that has fed it, but as they have been prodded to seek negotiated settlements and surrender territories, they have paid for every concession. They have spent decades attempting to live side-by-side with Palestinians who refuse to negotiate with them because they won't recognize their existence. When they finally negotiate and the Israelis surrender control of territories, the Israelis have been greeted with new attacks launched from the relinquished lands, often into Israeli civilian areas.

I often wonder: If all these things had happened to the United States as they have happened to Israel, would we be as agreeable about negotiating with these antagonists as the Israelis have, and would we be as willing to surrender the spoils of war captured from our enemies during their aggression? I doubt it.
Posted by Rob Doss at 7:03 PM
Email ThisBlogThis!Share to TwitterShare to FacebookShare to Pinterest