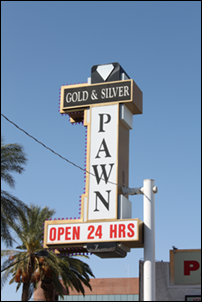 My brother and I finished our visit at our Dad’s gravesite in Bullhead City, Arizona and made our way back to Las Vegas for a Sunday morning flight back to Pensacola. On our way to the hotel, we decided to visit the pawn shop that is the scene and setting for the cable television show Pawn Stars.

We looked and looked, but didn’t see anything that we couldn’t live without. The prices seemed a bit steep.

There were a lot of people in the place and a good number of spectators (like us) outside taking pictures. I doubt the owner ever expected people to be standing outside of his pawn shop taking pictures of it when he started that business.

I did see a piece of carved estate elephant ivory tusk there that I liked, but they wanted $300 for it and wouldn’t come off of that price. I have one very similar to it that I bought at a consignment shop some time back.

The one I bought was listed at only $50. I looked it over carefully and could tell it was ivory and worth at least twice that. After studying it a little more, I pretty much decided they didn’t know what they had. It was carved out of about a 12-inch length of tusk and was mounted on a block of ebony.

I asked the lady at the counter if she could tell me something about it. Her response was ironic and funny in light of yesterday’s visit to the pawn shop. She said, “Well, I’ll tell you this isn’t Pawn Stars; it’s not a piece of ivory you’re going to get for a steal.” I said, “Oh, okay” and walked away back to where I found it.

I studied it some more with my cell phone flashlight, checking its grain to see if there were any inconsistencies, and there weren’t. So, I went back out to the lady at the counter and told her since it wasn’t anything special, I’d like to see what she could do with the price. She said she’d let me have it for $40, so I bought it.

She was right. That wasn’t Pawn Stars.

Posted by Rob Doss at 12:37 AM
Email ThisBlogThis!Share to TwitterShare to FacebookShare to Pinterest