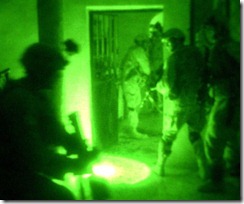 There’s an awful lot of talk about the celebrations in the streets in the immediate aftermath of the announcement of the death of Osama bin Laden. There’s even a quote circulating that’s been attributed to Martin Luther King, Jr., “I mourn the loss of thousands of precious lives, but I will not rejoice in the death of one, not even an enemy. Returning hate for hate multiplies hate, adding deeper darkness to a night already devoid of stars. Darkness cannot drive out darkness: only light can do that. Hate cannot drive out hate: only love can do that.” The implication is that Dr. King preached against the kind of celebrations we saw in America’s streets Monday night.

It appears that the person who originally posted the quote on his Facebook page got it right, but a subsequent poster misplaced the quotation marks which had the effect of distorting the original context of his words. The original poster led with his own words, “I mourn the loss of thousands of precious lives, but I will not rejoice in the death of one, not even an enemy,” and finished with Dr. King’s words that began, “Returning hate for hate multiplies hate…”

The context of the words as originally delivered by Dr. King was entirely different than they’ve been characterized these past few days. He wrote them in his book, Where Do We Go From Here: Chaos or Community?, and he repeated them in several speeches under a similar heading and purpose. It was his last book, and he wrote these words with the intention, in part, of taking on the Black Power movement that sought to renounce the non-violent approach to the struggle against racism that Dr. King had advocated.

So, his reference to exchanging hate for hate was a rebuttal to the idea of fighting violent racism with more violence. It had absolutely nothing to do with the just action of a nation seeking to eliminate an ongoing threat to the safety and security of its citizens.

As for the people, most of them young people, who were raucously celebrating the news of the death of bin Laden, my own view is that they simply had no perspective on which to base their reaction to the news. I think their lack of reference to this kind of victory led them to react as they might to any victory. Mostly, I consider it a fairly naïve response, not evil or mean by any means. Certainly, I wouldn’t put it on par – as some have – with the street celebrations of gratuitously violent actions perpetrated by terrorists in the Middle East.

This nation has endured great heartache and turmoil in the shadow of 9/11 and I think its citizens are entitled to rejoice in a victory against the evil that perpetrated it. I believe the reaction might have been a bit more contemplative if the celebrants had had more skin in the game or if they had had more experience with these kinds of things. While skin and experience do enrich our collective perspective as a nation, I don’t think it’s terrible that we live in a country that has the luxury of having highly trained and disciplined military people who make it possible for us not to be so thoroughly experienced at reacting to this kind of thing. The reflection will come in due time for most of those people.

By contrast, I’m quite sure the military people involved in this raid didn’t celebrate bin Laden’s killing nearly as much as they celebrated the success of the mission and the fact that they suffered no casualties. That’s what was important to them, even if bin Laden did have it coming to him for 9/11. As ostentatious as the celebration was for some here in the States, those military members will mark the passing of the event in much more subdued tones as they proceed relatively anonymously to the next mission.

For those still troubled over bin Laden’s demise, it’s important to remember it was bin Laden’s poor choices at that compound that night that determined his fate. When they tell you to give up and get on your face, they do mean it. Now he knows.

Posted by Rob Doss at 9:48 PM
Email ThisBlogThis!Share to TwitterShare to FacebookShare to Pinterest