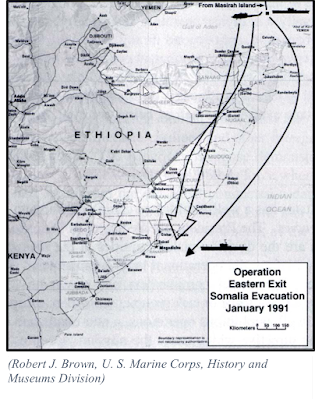 Each of our aircraft passenger manifests told a story. One listed the names of Kuwaiti and Soviet diplomats.  Another roster contained the name of a woman who had been shot, another named a man who had suffered knife wounds, and another named the Sudanese ambassador’s wife who was about to give birth. The manifest of LtCol Wallace’s aircraft included the name of a woman who boarded a helicopter with a parachute draped around her, the only personal belonging she had salvaged.[1] She reassured crew chief Corporal Tommy Sheffield that she wouldn’t jump out of the aircraft during the flight to the Guam.[2]

U.S. Embassy Public Affairs Officer Karen Aguilar later observed, “We couldn’t save ourselves. Either we were going to get blown away or somebody was going to have to save us.”[4]

Before leaving the ships in Muscat, Oman, Ambassador Bishop addressed the sailors and Marines aboard the Guam via the ship’s television system:

“Subsequent events made it clear that the Marines and SEALs came just in time, as looters came over the wall as the helicopters left. We were very impressed by the professionalism of EASTERN EXIT. The Marines and SEALs appeared at all times the master of the situation. The best indicator of their competence is the mission’s success: the evacuation of 281 people from an embattled city without injury to either evacuees or military personnel. The actions of those protecting the Embassy and evacuating evacuees was indeed heroic. And the actions aboard Guam were indeed compassionate. Few of us would have been alive today if we had been outside your reach. It was only due to your extraordinary efforts that we made it. We will take a part of each of you with us the rest of our lives.”[5]

With the evacuees ashore in Muscat, the Guam and Trenton headed to the Persian Gulf, back to another “clime and place” where, six days later, another mission began: Operation DESERT STORM.

Posted by Rob Doss at 5:58 PM
Email ThisBlogThis!Share to TwitterShare to FacebookShare to Pinterest