Rescue from Mogadishu (Part 6): "Super Stallions to the Front" 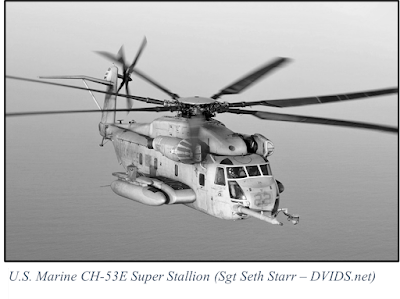 At 5:15 PM (Mogadishu time) on the 4th, the two Super Stallions took off from the Trenton and landed on the Guam where the crews turned in for a little sleep before launch time. The crews were awakened at 12:45 AM (Mogadishu time) on the 5th so they could conduct final mission briefings, review intelligence and weather reports, and receive updated maps and satellite images of the Embassy compound. Threats included small arms fire, SA-2 and SA-3 high-altitude surface-to-air missiles, and anti-aircraft artillery (AAA) scattered throughout the Mogadishu area.

By 2:30 AM (Mogadishu time), the 60-man security force consisting of Marines from the 1st Battalion, 2nd Marine Regiment and a 9-man SEAL team, boarded the two aircraft. Seventeen minutes later, the two giant helicopters, armed with .50 caliber machineguns on each side of the aircraft and an M-60 machinegun mounted on the ramp, lifted off from the deck of the Guam to begin their 466-mile overwater flight to Mogadishu.[1]

Once the aircraft were in the air, the crews attempted to use their long-range OMEGA navigation systems, but they had stopped working. The system needed connections to three land-based signals, but neither aircraft was able to get them. As it turned out, the area of the Indian Ocean in which the aircraft were operating was one of the places in the world that wasn’t fully covered by OMEGA stations. Instead, the aircraft had to rely on initial directional guidance from the Guam and dead-reckoning: punching the stopwatch, flying a heading while accounting for the wind, and hoping that you see what you want at the end of your timing.

The two helicopters would need to conduct three mid-air refueling evolutions with U.S. Marine Corps KC-130 tankers from VMGR-252 and 352, two inbound to Mogadishu and one on the return trip to the Guam.

As they approached their rendezvous for the first refueling evolution 185 miles from the Guam, the helicopters, flying on NVGs, climbed to 6,000 feet. They were able to see the two tankers from some distance; however, since the KC-130 crews weren’t wearing NVGs, they couldn’t see the helicopters until they flashed their searchlights.

In spite of not having practiced aerial refueling in the previous six months, the crews executed this particularly challenging and crucial refueling on NVGs without a hitch, aside from one of the aircraft developing a fuel leak inside the cabin which doused some of the troops inside with jet fuel. The crew chief was able to stop the leak quickly and the mission was not jeopardized.

As the first refueling evolution was completed, the OMEGA navigation systems on the Super Stallions came back on line, but since the systems had not been reliable up to that point, the crews used them as back-up only and relied instead on the tankers to provide directional guidance.

The crews met the tankers again for the second refueling about 225 miles from the first refueling location and 53 miles from Mogadishu. Each refueling was essential and carried with it implications for the remainder of the mission. If the second refueling evolution failed, the helicopters would fly to the Embassy compound, insert the security force, then fly into the Somali desert to wait for the Guam and Trenton to come within range.

The second refueling was a success, and the helicopters continued to the Embassy as dawn arrived. Approaching from the sea with the sun rising at their backs, the CH-53Es dropped down below 50 feet above the ground and sped ashore in Mogadishu at 150 knots (175 mph). As the two aircraft approached the LZ, they flew over a column of trucks, including some with mounted 12.7 mm anti-aircraft guns, but the Somalis scrambled from the trucks and ran for cover when the helicopters flew over them.

The crews spotted the Embassy at 6:10 AM (Mogadishu time), but as they began their landing transition, they saw 100-150 Somalis with ladders at an Embassy compound wall while a stream of gunfire was hitting the compound. As the aircraft flew low over the wall, the Somalis scattered.[2] The Super Stallions landed within minutes of their planned arrival time.

The relief among those in the Embassy compound when the CH-53Es arrived was unmistakable. The Deputy Chief of Mission reportedly said, “When I saw the words Marines on the sides of those large helicopters, I knew we were safe.”[3]

Posted by Rob Doss at 5:45 PM
Email ThisBlogThis!Share to TwitterShare to FacebookShare to Pinterest