In early 1996, I was a member of Marine Medium Helicopter Squadron 162 (HMM-162), the aviation element of the 22nd Marine Expeditionary Unit (Special Operations Capable) on board the USS Guam (LPH-9). We were operating in the Adriatic Sea and ashore in Croatia, Bosnia-Herzegovina, and Albania as part of the peace enforcement force, the "implementation force" (IFOR), during Operation Decisive Endeavor.

We were wrapping up our work in the Adriatic in early April, preparing to head to Israel for some exercises, when we received an order to prepare to redeploy to the west coast of Africa for potential operations in embattled Liberia. As we steamed toward the southern end of the Adriatic, we were either going to turn left toward Israel or right toward Liberia. By the time we reached the Mediterranean, it was a right turn. We arrived at "Mamba Station" off the coast of Liberia early in the morning of April 20th.

When we arrived, fighting around the U. S. Embassy was pretty intense as warring factions fought in the street in front of the Embassy and along several blocks nearby, so our first priority was to reinforce the Embassy with Marines. Our next priority was to fly non-combatants out of Liberia. In some cases, we flew them to the Guam; in other cases, we flew them to neighboring Freetown, Sierra Leone where they would catch an international flight out of the area.

As we continued operations in and out of Liberia over the next few months, we took time to train at the airport in Sierra Leone, away from the mayhem in Monrovia, although Sierra Leone had plenty of problems of its own. Armed soldiers were all throughout the airport keeping a menacing eye on the people there.

I remember the first time we landed in Sierra Leone, I had trouble reaching the control tower for permission to land. I had been calling them beginning at 25 miles out, but got no answer on the radio. I flew closer and closer and kept calling until finally on short final to the runway I simply said, "Lungi (the airport's name), this is Wombat 05, flight of two U. S. Marine helicopters. We're on short final and we'll be landing on runway 12. We have passengers and we'll need fuel." Normally, that would have been phrased as a request, but not in that case. Finally, the control tower answered and cleared us to land.

We hoped that the airport would have telephones so we could call home, so we left one Marine in the aircraft so no one would run off with the aircraft or more likely, the 50 caliber machineguns and ammo as we walked into the airport to see if there were phones. It was probably a curious sight for those in the airport because we were still wearing our flight gear and were carrying 9mm Barettas into the airport. There were enough American flags on flight suits that everyone probably figured out who we were pretty quickly. There wasn't going to be any trouble for us there.

What was interesting was that as the soldiers stood over the people in the airport, we walked past them and gave candy and cookies to the kids. I doubt they had seen friendly military people before, but it was good for them and the soldiers to see a little friendliness coming from the Americans.

We dropped off our passengers, made our phone calls, got our fuel, and headed back to the Guam sitting off the coast of Liberia. 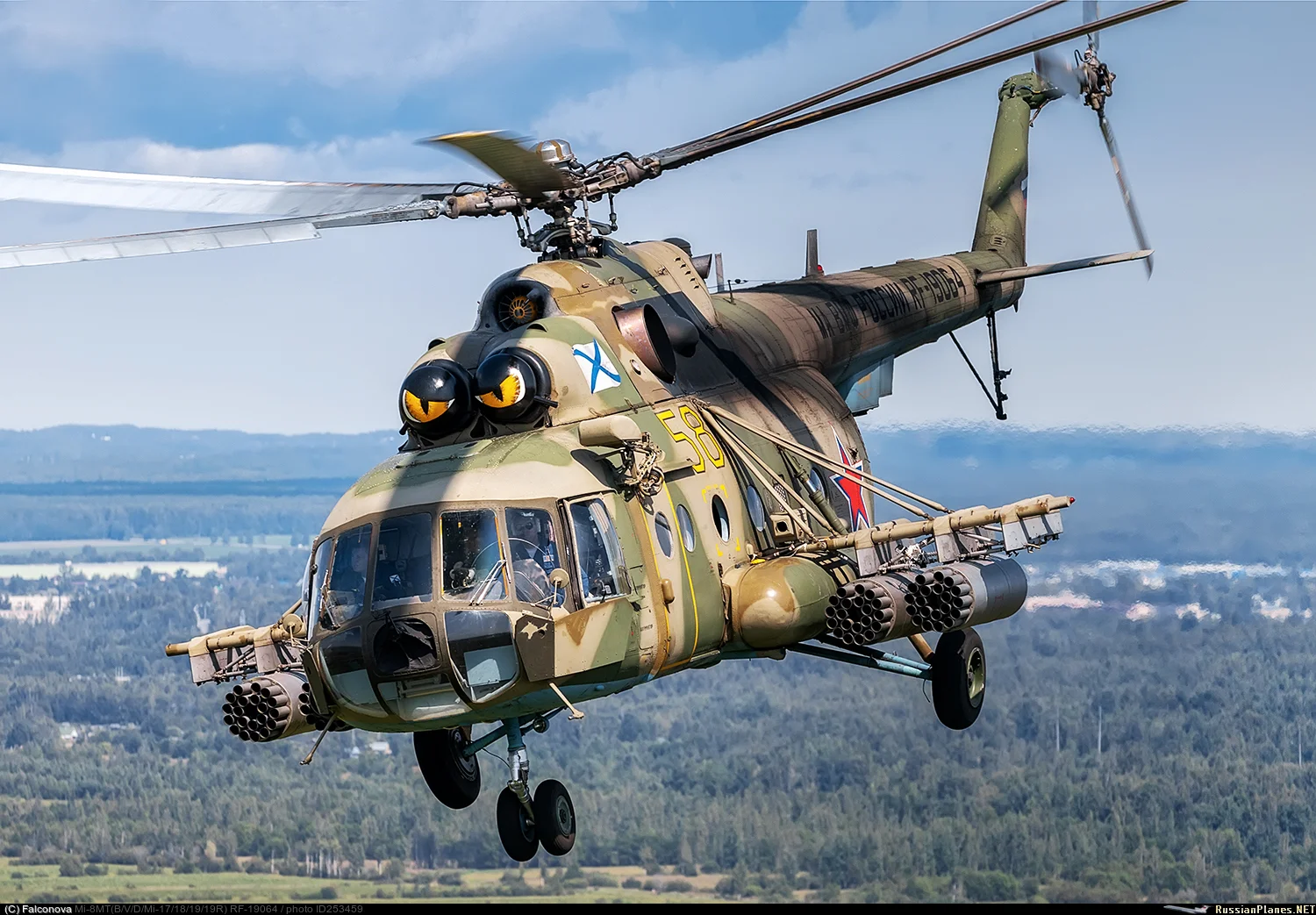 On another occasion, I led a flight to the same airport to do some night vision goggle training. As we landed, we saw a Soviet-made Mi-8 "Hip" helicopter sitting there on the flight line. To that point, I had seen photographs and studied aircraft recognition silhouettes, but I hadn't seen one in person before.

Once we shut the aircraft down, we walked over to the Mi-8 to look it over. I tapped on the aircraft skin and it was as solid as an old Buick. Our aircraft had aluminum skin to cut down on weight, so the Hip was quite a bit heavier and likely less maneuverable than our aircraft. A few minutes later, the pilot came out of the airport and walked over to us. He was a South African mercenary hired by the Sierra Leone government.

He asked if we wanted to go up in the aircraft. I was the senior Marine there and this was a situation that we had never discussed before: Would it be okay for us to go up in a Soviet-made helicopter flown by a South African mercenary? There was no one to ask for permission other than me, so I said, "sure." The answer, if I had asked, might have been "no," but if I didn't accept the offer everyone would have said I should have. That's the way that sort of thing works. It was such an opportunity, I couldn't pass it up.

So, we boarded the helicopter and as I prepared to take a seat in the back, the pilot directed me to the cockpit. He was actually going to let me fly that thing!

The pilot started the helicopter and asked me if I wanted to fly it. I was a little surprised that he was going to let me take off since takeoffs and landings are not always sure things, but I took the controls and got ready to lift off.

The Soviet helicopter main rotor systems rotate clockwise whereas American helicopter main rotors spin counter-clockwise. The reason that's important to know is that torque generated by the main rotor makes the fuselage want to spin in the opposite direction, which is part of the reason you have a tail rotor, technically known as a "counter-torque rotor." As you increase power to take off you need to manipulate the pedals which control the tail rotor to keep the helicopter from spinning when you increase or decrease power. After a while, American pilots who fly tail rotor helicopters apply left pedal input when they increase power to take off without even thinking about it. The problem with jumping into a Soviet helicopter is that if you apply left pedal without thinking about it like you would in an American helicopter, you'd make the helicopter spin badly. Fortunately, I didn't fly a tail rotor helicopter, so I didn't have to fight the temptation to put left pedal in. When I added power, I felt the fuselage want to spin left, so I added right pedal to counter it.

The takeoff went fine and I flew around the traffic pattern and set up to land at the helicopter pad on the north side of the runway. As I reduced power and pulled back on the nose to start my decelerating descent, the helicopter barely responded so it mushed right through the normal landing profile. I noticed that the South African sort of leaned forward to get a look at the pad which was getting more difficult to see as we creeped up over it, so I--as cooly as I could--said "I'm going to make a steep approach," as if that was my plan all along, which it wasn't. Doing a steep approach in an unfamiliar aircraft would have been kind of a bold thing to do, so he must have thought I was pretty confident in my ability. Fortunately, that pig slowed down enough that I was able to stay on a steep profile and put it on the pad with no problem. I climbed out of the cockpit to give another pilot a go at it, but I did warn the next guy on my way out that it was pretty mushy.

Still not sure that news that we had flown the Soviet aircraft was going to be well-received when we returned to the squadron, I told my CO about the great opportunity that we couldn't pass up, and he thought it was great and was glad we did it.

Posted by Rob Doss at 12:56 PM
Email ThisBlogThis!Share to TwitterShare to FacebookShare to Pinterest