Rescue from Mogadishu (Part 4): "By Day or By Night"

With the situation at the Embassy falling apart rapidly, we needed to consider options for putting troops in the Embassy compound earlier than the projected January 7th evacuation date.

The Trenton, which had been traveling with us, had two giant U.S. Marine CH-53E Super Stallion helicopters from Marine Heavy Helicopter Squadron 461 (HMH-461) that were able to refuel in flight. This refueling capability meant that theoretically, we were never too far from the Embassy to help. However, the first look at that option wasn’t very promising. None of the pilots had practiced aerial refueling in six months and the refueling probes had been removed from the helicopters to make room for the aircraft on the Trenton.[1] That option had other practical limits too, including crew rest requirements and the risks associated with conducting inherently dangerous aerial refueling evolutions on long overwater legs in the dark.

Still, something had to be done. If the CH-53Es had their refueling probes reinstalled, they could fly to Mogadishu with a security force to reinforce the Embassy. This advanced security force might just keep the Embassy from being overrun and it could help prepare the LZ and evacuees for the main evacuation.

The main evacuation would happen later and involve more aircraft. With the number of people who were gathering at the Embassy, it looked like we’d need 4 waves of 5 CH-46E helicopters to do the job.

The big question, however, was whether to conduct the main evacuation in the daytime or at night.

A daylight operation might enable us to be recognized as a neutral third party attempting an overt evacuation of innocents, and we might be able to proceed unmolested. However, we couldn’t ignore the reports and incidents at the Embassy which made it likely that we’d be targeted if we were seen, regardless of our intentions.[2]

On the other hand, if we flew into Mogadishu at night we could do so under the cover of darkness. NVGs would permit us to see in the dark, and we could turn off our aircraft lights and become practically invisible to those on the ground. Nevertheless, any advantage gained by flying on NVGs would be lost by meandering flights using unreliable maps hunting for a darkened LZ over hostile positions.[3] 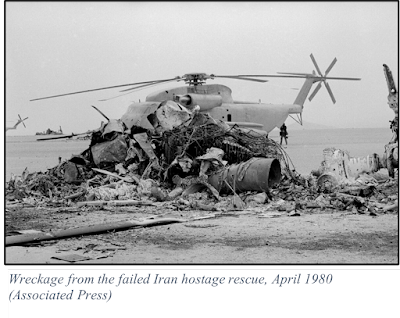 At the time, NVG use by helicopter pilots in raids like this was a relatively new phenomenon. In fact, there wasn’t much of a record of success of it outside of training and exercises. The Iran hostage rescue a decade earlier failed when a CH-53 with a crew using NVGs collided with a C-130 refueling tanker in the blowing sand of a desert landing zone. It was a persistent reminder that conditions could get out of control very quickly and produce tragic consequences.[4]

But the military is resilient, and it learns its lessons quickly so it can return to action. In the decade between the Iran hostage rescue mission and the crisis in Somalia, training for a broad range of special operations missions under NVGs had been aggressive and effective. While neither HMM-263 nor HMM-365 was a designated special operations capable unit, both squadrons had been SOC squadrons and both had crews with extensive and recent special operations experience.

Ultimately, the randomness of the violence and further mayhem around the Embassy grounds convinced us that our helicopters likely would be targeted if seen, and, with the report that the fighting decreased at night, the night option simply made better tactical sense. The decision was made: We would go in at night.[5]

Posted by Rob Doss at 5:27 PM
Email ThisBlogThis!Share to TwitterShare to FacebookShare to Pinterest