Rescue from Mogadishu (Part 5): "Not Another Night Like That"

As aggressively as we planned on the Guam, we couldn’t do anything about what was happening at the Embassy, at least not yet. Late in the evening on January 3rd, Embassy buildings were hit by machinegun fire. Then the next morning on the 4th, an Embassy warehouse was struck by a rocket-propelled grenade (RPG) and armed looters fired through gaps in the Embassy fencing until the guards and security staff returned fire and forced them to retreat.[1]

By around midday on January 4th, Ambassador Bishop believed the Embassy couldn’t hold out much longer as he reported that the Embassy was “falling behind the curve in our ability to protect ourselves from the lawlessness which now prevails in Mogadishu.” He was certain that they couldn’t hold out until January 7th when the Marine helicopters were originally estimated to arrive, so he requested an “immediate airlift from Saudi Arabia of a parachute force sufficient to provide augmented security to the Chancery and JAO (Joint Administrative Office) building where everyone…currently is safe-havened” until the Marines could arrive.[2] 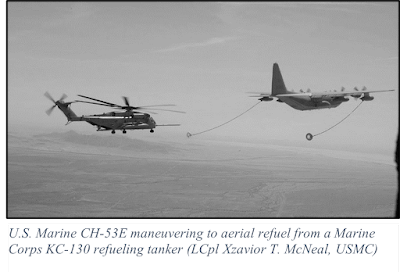 Back on the Guam, it was clear that the Ambassador believed the Embassy was about to fall. That called for some bold action, so the decision was made to send the two CH-53Es on a long overwater flight to the Embassy with a heavily armed and equipped security force on board. They would fly from the Trenton to the Guam that afternoon for some rest and to receive briefings, updated maps, and photographs. Then, they’d take off very early the next morning on the 5th to deliver the security force to the Embassy and return to the Guam with 60 evacuees.

Meanwhile, the Guam and the Trenton would continue to steam toward Mogadishu at top speed to be in position to launch CH-46E helicopters for the main evacuation that night.

The plan meant that the paratroopers Ambassador Bishop requested, even if they would have been available (which they weren’t), would not be necessary. Washington advised Ambassador Bishop that Marines would begin arriving at the compound at dawn the following morning on the 5th and that the main element would follow later that evening.[3]

The Embassy was eager to have the assistance. Ambassador Bishop said that January 4th was their worst day and remarked, “We can’t have another night like that.”[4]

Posted by Rob Doss at 5:38 PM
Email ThisBlogThis!Share to TwitterShare to FacebookShare to Pinterest